Kurds in Turkey need bridges, not ditches for a better future 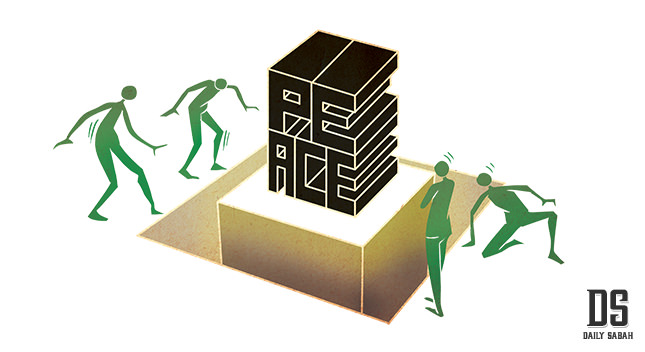 Kurds want to eliminate the PKK, which has been continuing its terrorism for many years, as well as the HDP, which, due to its support of the PKK's violence, disappointed their hope of seeing the party as their true political representative defending their rights in Parliament

On Dec. 7 media outlets circulated the unfortunate news that the Ottoman era Fatihpaşa Mosque in the province of Diyarbakır had fallen victim to the latest clashes between the PKK terrorist organization and Turkish security forces in Sur. The 16th century mosque, also known as the Kurşunlu - "leaded" in English - Mosque, was partly burned, as firefighters were blocked from putting out the fire by PKK terrorists who opened fire on them after causing the blaze with handmade explosives.

In addition, not long ago, on Nov. 28 the chairman of the Diyarbakır Bar Association, Tahir Elçi, was killed in an armed attack by PKK terrorists after a press release about 500 meters away from Fatihpaşa Mosque, beside the Dört Ayaklı Minare, another historical structure dating back nearly five centuries. Moments before he was killed during an attack by PKK militants on police, Elçi had said: "We do not want guns, clashes or operations here," drawing attention to the damages to the historic Sur district in recent clashes. Elçi, a prominent human rights lawyer, was also known for his opposition to clashes and efforts to establish peace in the region. More specifically, he had voiced his stance against the ditches dug by the PKK's urban youth wing, the Patriotic Revolutionary Youth Movement (YDG-H).

In order to understand the recent socio-political context in the region, an analysis of these two symbolic incidents must be provided. It can be said that they have exposed the symptoms of a nonworking relationship among various actors, including the state, the Democratic People's Party (HDP), PKK and Abdullah Öcalan triangle, and Kurds in the region.

In December 2012 President Recep Tayyip Erdoğan, as Prime Minister, stated that the government had initiated steps toward a solution to the decades-long conflict, including conducting meetings with imprisoned PKK leader Öcalan. Shortly after, the government's enthusiasm for finding a solution, which came to be known as the reconciliation process was also welcomed by the pro-Kurdish HDP leadership. The steps taken created a positive political atmosphere that gave hope to those longing for peace, despite certain events that attempted to overshadow and sabotage the political solution.

Meanwhile, in March 2013 a letter calling for a cease-fire, disarmament and withdrawal of PKK militants from Turkey, written by Öcalan, was read during Nevruz celebrations in Diyarbakır. In his letter Öcalan said: "I think it is necessary and historic for the PKK to end the 40-year armed struggle against the Republic of Turkey and hold a congress to conform to the new era's spirit." In April 2013 the PKK announced the withdrawal of its fighters from Turkey to Northern Iraq, which was recognized as the end to the armed-conflict. The government also continued taking its democratic steps, offering further rights and freedoms to the long-neglected Kurdish citizens.

The rise of democratic discourse to end the conflict was vividly reflected in the social atmosphere of the region throughout this period, leading to increased economic growth and development.

Meanwhile, the HDP's populist discourse, offering inclusive politics at the time, were also valued by the Kurds in the region, with hope that the armed conflict would finally end and their needs and wants would be carried to Parliament.

However, prior to the June 7 elections such rhetoric by the HDP and its affiliates took a different shape during the election campaign, as language of peace and inclusivity in western Turkey to appeal to leftist voters and language of violence and threats against the state was used to overshadow the government's investments in the region. The HDP's significant gain in the June 7 elections, in a way, further ignited such rhetoric of violence, which finally lead to the Kurdish Communities Union (KCK), an umbrella network that includes the PKK, announcing that the cease-fire that was declared via a message from Öcalan in 2013 had ended.

The end to cease-fire, in a way, while it was a blow to the reconciliation process that the state had initiated, was also a stab in the back to the Kurds in the region who voted with hope that the conflict would finally end and the region would continue to prosper.

The HDP and PKK leadership in Northern Iraq's Qandil Mountains insisted on escalating tensions, which was not only against the will of the Kurds, but was also not supported by Öcalan. In a way, the HDP had sided with the hawks in the PKK leadership, singling out Öcalan. This is why, after the Nov. 1 elections, Öcalan blamed the PKK and HDP's violent discourse for the party's failure to maintain its percentage of the vote, and also the public did not join the call by the PKK to rise up, in addition to turning back to the Justice and Development Party (AK Party) in the Nov. 1 elections.

Öcalan expressed his disappointment about the HDP's Nov. 1 election results and criticized the campaign it followed, saying: "I said that there can be no peace under the shadow of guns. When guns talk, we cannot talk about peace and a solution, I had told them. They did not listen. I was right. It is time for the PKK and HDP to be self-critical," according to a report published by daily HaberTürk. Öcalan also was not happy with the HDP and wing of the PKK leadership that had wasted such a positive outcome over small disagreements.

Such disengagement from democratic politics and the Kurds' "will" brings the argument up that the aim behind these wings of the HDP and PKK leadership is not to walk the road with the will of people and eventually reach a mutually beneficial environment for both the state and the Kurds, but to escalate violence in the region and turn the urban clashes into a civil war.

This is why the two incidents mentioned above, though symbolic, can help explain the recent clashes that have arisen despite the will of the Kurds. Firstly, it is not a secret to know that a big chunk of Kurds in the region are conservatives who value religious beliefs despite political affiliation. As such, the attacks on mosques expose a conflict between the PKK wing and the public, which does not in any way support a disengagement from religious values. Secondly, in addition to Öcalan being singled out, voices such as Elçi's are being silenced, as he was publicly opposing the urban clashes and ditches.

In the 1990s the harsh state policies and clashes between Turkish security forces and the PKK led to the displacement of many people in the region who migrated to urban areas in western Turkey, leaving their lives behind. The positive atmosphere reached in the last few years with the reconciliation process, however, led to a migration back to the region from western Turkey as the economic growth and prosperity acted as a pull factor.

If the goal is to defend the rights and freedoms of Kurds and enhance their livelihoods through political means, then one might ask the reasons behind the HDP's reluctance to put distance between itself and the PKK, an armed group that aims to escalate tensions in the region despite the people's will. At the same time it is hard to understand the position that offers itself as the representation of Kurds, yet support the ditches and urban clashes by the People's Protection Units (YPG) in Syria and the PKK in Turkey that turn people's daily lives into chaos.

The ditches and the conflict coupled with imposed curfews do not serve the interest of any of the average Kurds in the region. The state is determined to fight the terrorist threat, which it considers to be a national security problem. The HDP's insistence on siding with violence further enhances the social, political and economic difficulty the Kurds are pushed into, let alone the lives lost. If the HDP wants to become a legitimate actor with a role in reconstructing the peace with the state, it should support building bridges, not digging ditches, which are roadblocks for the Kurds on the way to elevating their lives to where they deserve to be.At the same time, while the state should continue its counter-terrorism attacks in the region, which it has been carrying with the utmost diligence to minimize the loss of civilian lives, it should seek new channels to communicate with the public and use a rhetoric that engages them through successful public relations campaigns. A liaison, similar to the Wisemen Committee should be established, and perhaps include other prominent, non-state Kurdish actors in the region, while avoiding being provoked. Turkey had reached a positive environment with the reconciliation process, coming from harsher clashes. This gives the public hope that such an atmosphere can be reached again if dialogue is re-established.