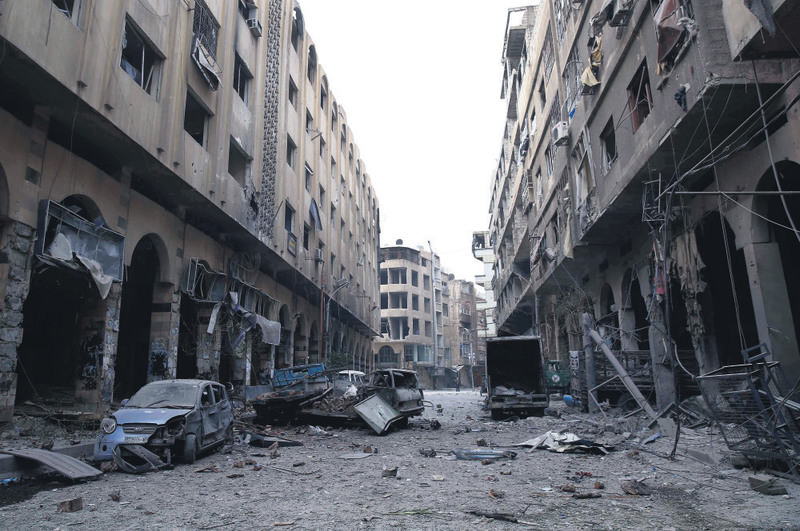 A view of the Syrian town of Douma in the eastern Ghouta region, a moderate stronghold east of the capital Damascus, following airstrikes.
by Markar Esayan Dec 15, 2015 12:00 am

The stability which was provided by the results of the Nov. 1 elections, bringing the AK Party to power alone, makes Turkey, being the strongest democracy in the region, an assurance of trustworthiness for the people in the Middle East

We often have difficulty explaining things about Turkey to foreign journalists or people of different professions visiting our country. Unfortunately, a large part of these foreign friends come to Turkey quite unprepared and uninformed. You can understand this from their irrelevant questions or their preconceived notions. Their opinions about the political spectrum in particular are mostly stereotypical and superficial. For this reason, one feels compelled to give a brief account of the historical events of the last 200 years so they can truly grasp current developments and one can answer their questions properly.

Of course, we also encounter some among our foreign friends who take their jobs seriously and follow Turkey closely through diverse sources. And that makes us happy because it is a sign of the basic respect that we expect. Thus, both we and our guest who seek to be informed leave the meeting content. What matters is not to fully impose our convictions on another person, and it should not be, but grappling with worn out stereotypes that have been prevalent for years does not make one feel good, either.

The following quote from the autobiographical novel "What a Beautiful Sunday" by Jorge Semprun, who survived the Buchenwald concentration camp, is an example of meaningful self-criticism: "The West has always been reluctant to understand the East."

Actually, I do not think this reluctance stems solely from disregard, arrogance or laziness. To truly understand a person or a society means the acceptance of establishing equal relations with them. That requires starting the deconstruction of colonialism. Then the West's reluctance to understand the Middle East without distorting it - in a positive or negative way - is actually the resurfacing of a more deep-rooted form of assertion of power.

Of course, this reluctance to understand, which emerges when looking at Turkey and further east, and which gradually intensifies when going further to east, results from many-layered reasons. Westerners have a general assumption that Western lifestyles represent the ultimate point in the advancement of human civilization. This presupposition automatically removes the responsibility to understand any non-Western society or thing. What would be more natural for the rest of the world than to obey a culture that reached perfection?

Westerners really believe this. Bourgeois humanism had given valuable advancements to the world by breaking loose from the God-centered Middle Eastern world. Western intellectuals were very optimistic and confident in the 19th century and early 20th century. They had not only secularized the God-centered worldview of the Church, which conceived of a heaven after death, but also achieved brilliant success in bringing heaven down to the here and now. While steam-powered machines started mass production, dialectic materialism claimed to protect the rights of the resulting so-called universal working class. Thus, slaves were relieved of relying solely on Christianity and given an identity instead; a cause, a weapon and the hope of acquiring power. In other words, bourgeois humanism had managed to pervade every aspect of life.

Consequently, Western humanist-modernists expected that all the other small pre-modern universes would be engulfed by that new universe the way planets are swallowed by black holes. The "East within," i.e., the Church, had surrendered and been conquered during the last quarter of the 19th century. Meanwhile, the Ottoman Empire, or the East outside, i.e., the founding other, had disintegrated after 300 years.The collapse and eventual abolition of the Ottoman caliphate by the revolutionary Kemalist Young Turks and the creation and subjugation by Western colonialists of a dozen puppet statelets with artificial borders in former Ottoman territories in the Middle East had also thrown the Islamic world into a grave crisis. Even the most hardcore Islamists seemed to accept the ontological superiority of the West, or became world-weary.

Reason triumphed over emotion, body over spirit and the concrete over the abstract, and that victory seemed decisive.

The world had rapidly begun to become monotonous and dull. Nietzsche, among the first to realize that, made some efforts, but the solutions he offered could not prevent the fall of what he called the "overman." At most, he inspired Hitler to send into gas chambers first invalid Germans and then Jews and Gypsies. Intellectuals like Zweig and Trakl, who had eulogized Western civilization, began to take their own lives one after another, as they had killed the other half of the man, i.e., spirit, emotions and the abstract, long ago, which they could cling to. Not everyone was farsighted enough to become insane early like Nietzsche did.Thus the colonialist West, the alter ego of the brilliant West, had done so much damage to the world with two world wars that a thousand pre-modern Genghis Khans or Tamerlanes would not have been able to do, not only through genocides, but also by turning unique cultures of the world into bad imitations of itself. One might ask why the East has not yet responded. Alright, the West is bad, but does the East itself not have a responsibility, especially Muslim nations?

This question arose during the Sept. 11, Charlie Hebdo and Paris attacks as well. And it brings us to the above statement again. Truly understanding a person or a society means the acceptance of establishing an equal relationship with them. Put differently, if one is not inclined to accept establishing equal relations with a human being or a society, one will not want to understand them, either.

The Middle East had become so atrophied that it lacked the necessary vitality to stand on its own feet and meet the minimum requirements for establishing an equal relationship with the West. For me, the call for Syrians and Iraqis to be self-critical regarding DAESH or their economic or scientific backwardness seems more like a cruel joke than a call.

Leaving aside Syria and Iraq, Turkey and Egypt have made serious progress in this respect. The elections held in Egypt after the Tahrir Revolution, the most democratic overthrow of a dictator in a century, and the new constitution had a level of sophistication that is rare even for the Western world. But the West supported a general's bloody coup. Concurrently, an unprecedented dirty perception attack was launched on the Justice and Development Party (AK Party government) of Turkey, which has achieved a more advanced democracy. Media organizations like The New York Times, The Guardian, the Wall Street Journal, The Economist, Der Spiegel, and non-governmental organizations like Human Rights Watch (HRW), the Committee to Protect Journalists (CPJ) and Amnesty International, champions of democracy, assisted this attack through biased comments and reports. Oh yes, I forgot to add the European Union's biased Progress Reports for Turkey to this list.

rsion of Islam but a product of modernity. DAESH is the misbegotten child of colonialism. Its antidote is to give Egypt's Tahrir revolution a chance and to dare to establish equal relations with countries like Turkey, where democratic Muslims develop democracy. Sympathizing with the so-called secularist alliance in Turkey, which plans to overthrow the AK Party through a civil war, while immigrants in the West face racism, while innocents die in the thousands in Palestine, Syria, Egypt and Arakan would cause the greatest damage to Western civilization.

Strong nations of the Western alliance should be grateful to Erdoğan and the AK Party, and particularly to the nearly 50 percent of responsible voters who voted for stability in Nov. 1 the elections, because destabilizing Turkey by overthrowing the AK Party means bringing Raqqa to Paris. If the world is to avoid a third world war, it will be able to do so by help of Turkey, which has the power and sanity to talk to both the West and the Middle East. If we cannot offer Muslim nations an authentic and functioning model like Turkey, many other terrorist groups like DAESH will turn the world into a living hell.

And Islam will be the last to blame.
RELATED TOPICS