Russia might pay heavily for its Turkey campaign, but Erdoğan has to play the Mosul card very carefully 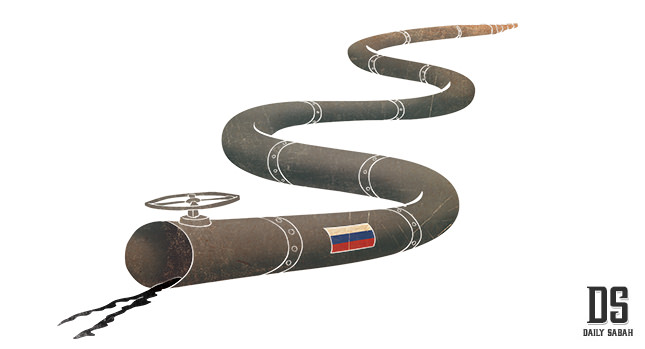 Russia's providing 60 percent of Turkey's gas may have worse repercussions on Russia than on Turkey, if it imposes a sanction on oil transfer to Turkey upon the downing of its jet

The 19th century novelist Mary Ann Evans - who worked under a nom de plume of George Eliot - who wrote "friendship begins with liking of gratitude, roots that can be pulled up."

Perhaps this applies to Turkey's recent escapade of downing a Russian jet and where it has placed Ankara in terms of its relations with the powers in the region.

In some cases, the silence is deafening. Saudi Arabia's lack of morals, if not verbal support, over the escalating crisis speaks volumes about how the country has retreated from being a real regional power broker following economic woes from low oil prices and overstretching itself in Yemen.

The kingdom, plus its other GCC partners who play second fiddle to it, were once more on board. We only have to go back earlier in the year to read reports of Turkey, Saudi Arabia and Qatar working out a military strategy for Syria - which even involved Turkish and Qatari soldiers - to put the Russia jet incident into perspective: Turkey's friends in the region are mainly "fair weather" ones.

Ankara's aspiration to be a regional super power was bold and set itself above its two contenders, Saudi Arabia and Iran, the latter a foe that world leaders were hoping would repair its troubled past with Turkey and make amends for a bright new future, post "Iran Deal."

Iran has been quiet in recent weeks but regional analysts know that Tehran's reach is far and wide and has a significant role in the battlefields in both Syria and Iraq, with the so-called war on DAESH. Tehran would ideally like Shiite militias in Iraq to be the victor of Mosul when it finally falls and certainly does not want Turkey to be in the picture when the stage is set and the cameras are rolling.

And so Turkey's stand-off with Russia has affected Ankara-Tehran relations.

But so far, Iran's allegiance to Russia scuppers any progress Turkey can make with its neighbor as building relations with Tehran is all about energy. Ankara and Tehran edged closer recently over talks of an Iran pipeline which could cross Turkey and supply Europe.

Yet now that cooperation looks dashed.

Turkey is currently locked in a diplomatic dispute with Russia, which provides 60 percent of Turkey's gas needs. Iran is the second supplier of gas to Turkey, accounting for 30 percent of the country's needs. If, in this spat with Moscow, Turkey has its gas turned off as a blow from Vladimir Putin, it could mean a key part of the Iran Deal becomes mere folly.

Recep Tayyip Erdoğan appears to be ahead of the game. Quickly he went to Baku to talk energy with Azerbajdzan days after the Russian jet incident, knowing full well that a new energy partner needs to be sought.

But if the sanctions against Turkey remain, it may well be Russia who is the loser in the long term based on the adage "the bigger you are, the harder you fall." Russia may be the loser when the dust settles as it needs the Turkish straits and this lifeline to its naval fleets can be closed if Turkey is pushed further.

The ultimate stand-off will come if Turkey has to resort to that. And Putin would be insane to consider military action against a NATO member.

But how can the West stand by and remain quiet when this tension builds up? It's not only the Gulf Arab countries that were considered partners to Ankara in the past who have remained mute. Just look at London and Washington. With the escalation reaching fever pitch, it is telling that neither David Cameron nor Barak Obama wish to make the call to Putin to urge him to do what all super powers have to do, every so often: stand down.

Does Washington have an ace to play with the Russians? How can the West stand by and watch Turkey punch way above its weight in the region but be marginalized now by Russian bullying?

It's unlikely Putin will be drawn into a scenario that gives Ankara the chance to seal the straits. He will more likely play an underhand game on the battlefield by bullying his partners to intimidate Erdoğan.

Take the Mosul incident. The Turkish media reports claim there is currently a 600-strong special forces unit in Bashiqa, near Mosul, along with the 25 tanks as part of a military agreement struck in March of this year with the Iraqi government in Baghdad as well as the Kurdistan Regional Government in Irbil. Mysteriously though, Iraq's Prime Minister al-Haider Abadi, a man with enough troubles of his own with a rumored military coup in the making to oust him as one, appears to be suffering from a memory loss. It was him, after all, who invited Turkish forces there in the first place. Recently though there is a concerted effort to have Turkish forces moved, with even talk of Shiite militias ready to take them on. The Mosul wrangle is awkward as if the town falls to Kurdish forces, then this will be considered a defeat by Baghdad's Shiite militias and the borders of the Kurdistan Regional Government will swell, enflaming sectarian tensions. There is no question though that Baghdad is under Iran's influence and Tehran is naturally taking the lead from Russia in its latest campaign to reduce the impact of Turkey's role. But where are the Gulf Arab countries when Turkey needs them? Or the EU for that matter which has taken geopolitical impotence to a whole new level in the region?