Yet another call for uprising from Demirtaş goes unheeded 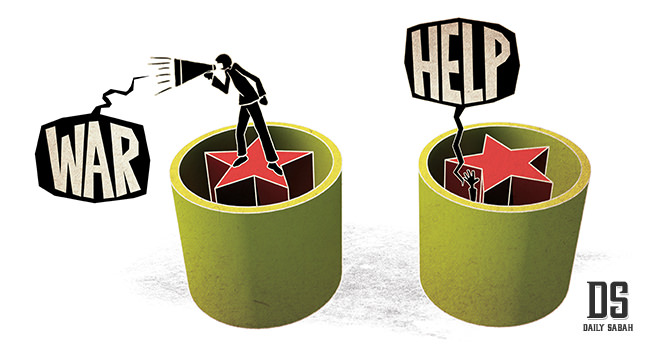 The PKK exploited DAESH's attack on Kobani as part of its pan-Kurdish agenda to break down the reconciliation process and eventually incite a Kurdish civil war, if possible

The Kurdish Communities Union (KCK) is the umbrella organization that encompasses the terrorist and political organizations like the PKK, the Democratic Union Party (PYD) and its armed People's Protection Units (YPG) in Syria and the Party of Free Life of Kurdistan (PJAK). Since July 8, 2015, the KCK has issued a total of 140 calls for the Kurdish people to rise up.

Peoples' Democratic Party (HDP) co-chairs Selahattin Demirtaş and Figen Yüksekdağ called for a march to the Sur district of Diyarbakır province where the PKK and its youth wing, the Patriotic Revolutionist Youth Movement (YDG-H), have stored tons of explosives and heavy weapons, ravaged mosques and churches, dug trenches in the streets and caused 200,000 Kurds to flee their homes.

During the 90-day curfew, the state abandoned its old practices and made every effort possible to protect civilians from harm. That is why the curfew was imposed. For the PKK and the YDG-H, whose fighters are basically poor youths aged 13 to 18, have been using civilians living in Sur as human shields.

With the means at its disposal, the state could clear the area of terrorists in a few days. But it would have led to significant civilian casualties. In fact, one of the objectives of the PKK is to cause the state to kill as many civilians as possible.

Think of it this way: Trenches are dug in the alleys and streets of some of the largest districts of Paris, London, Berlin, Strasbourg or Brussels. Moreover, these trenches are dug using engineering vehicles that belong to the municipalities of these districts - here in Turkey they are run by the HDP's regional affiliate Democratic Regions Party (DBP). The trenches are filled with improvised explosive devices and bombs and the streets are constantly mined to fend off security forces.

Security units trying to enter these streets are shot by snipers. Around 350 soldiers and police officers were killed so far.

Would France, Germany, Britain or any other state tolerate this? I would like to share with you some of the statistics on the fight against terrorism since July 20, 2015 to the end of last February:

Number of terrorists killed or captured: 2,547

Number of trenches dug by the PKK during the period: 3,860

Again, during the same period 1,098 vehicles and 295 buildings were heavily damaged. There were 12 ambulances among them.

Demirtaş called on people to take to the streets for the 140th time just to support the terrorist organization that has caused all this damage. But the people did not heed his call.

The 200,000 citizens who fled PKK atrocities and left Sur did not go to Syria's Kobani just across the border, which is controlled by the PYD, but to western Turkey. Their accommodation problems are solved by the state. Each family receives approximately 350 euros as rent allowance. Shouldn't have these 200,000 people responded to the HDP's call for a march to Sur? But they did not, and will not.

As you remember, the KCK and HDP co-chairs called for an uprising on Oct. 6-8, 2014. Over 50 citizens were killed in the ensuing YDG-H terrorist attacks. Among the victims was Yasin Börü, who was only 17. Börü was thrown from a third-floor window, stabbed, burned and then his body was run over with a car.

But what was the reason for the call for uprising? What happened in Turkey to cause the PKK to commit such violence?

The PKK and HDP claimed that Turkey was supporting DAESH. But they offered no evidence to support this claim. The purpose was to alienate conservative Kurdish voters from the Justice and Development Party (AK Party) through this black propaganda and with the help of Gülenists, Turkey's secularist and nationalist media outlets and foreign media. Since the beginning of the reconciliation process, which had been launched to make the PKK lay down arms, strengthened relations between the two societies, the PKK and HDP's primary objective was to cause the process to collapse. Why did they want it? Because they believed that historical conditions were suitable for the creation of a PKK-controlled state in northern Syria.

They tried to exploit the DAESH attack on Kobani as part of their pan-Kurdish agenda to break down the reconciliation process and eventually incite, if possible, a Turkish-Kurdish civil war. Moreover, on Oct, 2, 2014, only four days before the Oct. 6-8 incidents, Parliament passed a motion to allow Iraqi Kurdistan Regional Government (KRG) peshmerga forces to cross from Turkey into Kobani. While the AK Party voted in favor of the motion, the HDP voted against the mandate. It turned out that the HDP had different purposes, as it voted against the motion while claiming that Turkey, which allowed the peshmerga units to pass through its territory with their heavy weaponry to defend Kobani, was supporting DAESH. Only four days later, 24 cities were devastated during the street protests.The government did not end the reconciliation process despite these incidents. Later, the HDP won 80 seats in Parliament in the June 7, 2015 elections. However, the PKK ended the cease-fire and resumed its armed struggle only a month later. The current picture is a consequence of what happened afterward.

Sadly, the HDP got closer to the PKK line instead of the PKK getting closer to HDP line. The HDP has used its presence in Parliament only to justify terrorism. It has already lost a considerable amount of vote. Its votes have fallen below the 10 percent national election threshold.

The HDP and PKK have wasted this historic opportunity, which had been brought through taking significant political risk and making great effort, in the quagmire of an illusion about Syria. They have wasted a huge opportunity. The process will advance with Kurdish citizens themselves.
Last Update: Mar 10, 2016 1:14 pm
RELATED TOPICS