Can the brown Turkish subaltern speak? 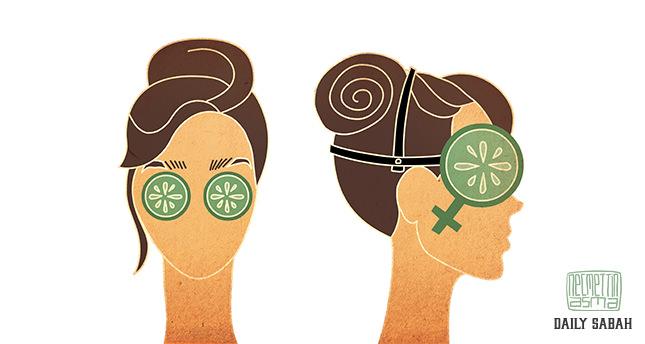 Instead of discussing the ways and methods of curbing violence against women, each speaker at the Summit of Women in the World started her presentation by stating that President Recep Tayyip Erdoğan poses a threat to democracy in the country

Women in the World is an offshoot of The Daily Beast (incorporated in Newsweek), a digital news site created by journalist Tina Brown to give a platform to global women on the front lines. Last year, Women in the World formed a joint venture with The New York Times to create a new digital home for the brand on nytimes.com, which means the New York Times is a business partner. Women in the World runs forums, debates and annual summits that invite women of impact. However, the audience has to pay to watch "vivid journalistic narratives, stirring videos and provocative discussions."

At first sight, it seems to be a good attempt to give a voice to some influential women from around the world to tell their compelling stories in every sector. These popular women narrate their success stories for a western audience so that their hard work can be appreciated and applauded, which is an indication of how close they come to western civilization. This is reminiscent of 19th century "unilinear social evolutionism," which said that all societies would eventually achieve the level of modern western society. If the invited speakers at the summit come from the non-western world, they suddenly become spokespersons of their communities, misrepresenting their own people most of the time to their new western partners. Everything they say about their societies is taken at face value. Furthermore, these speakers at the summit assume a new role as saviors ready to rescue their fellow citizens from a life of darkness and backwardness. In other words, they instantly became the carriers of the "white man's burden," saving their own people from oppression and, more crucially, from their reticence. Having mentioned the reticence of local people, we could again ask what Gayatri Chakravorty Spivak asked some 20 years ago: "Can the subaltern speak?" or the question asked by Lila Abu-Lughod during America's war on terror: "Do Muslim women really need saving?"

On the second day, a session aired the voices of "The Fearless Women of Turkey" moderated by Zainab Salbi, host and creator of "The Nida'a Show" and founder of Nida'a al Nissa Productions. The speakers included Amberin Zaman, Selin Sayek Böke, İpek Bozkurt and Melanne Verveer. One would hope to hear these women's success stories in terms of how they had achieved their status as "fearless women" in a country like Turkey. Yet, instead of discussing the ways and methods of curbing violence against women, each speaker started her presentation by stating that President Recep Tayyip Erdoğan poses a threat to democracy in the country. It is now fashionable for anyone criticizing anything that goes wrong in the country from economics to infrastructure to ill treatment of women to start pouring down their hatred toward Erdoğan without missing any opportunity. In the Women in the World summit session on Turkey, the four speakers started with Erdoğan and his "ascent to an authoritarian position of power" that they believe disregards the rights of women and is thus a threat to the country's democracy and regional peace. For the speakers, the increase in violence against women in Turkey is the consequence of Erdoğan's attitude toward women's rights. They implicitly conclude that if the country got rid of Erdoğan, all problems would be solved automatically straight away. On stage, the speakers turned out to be rescuers of "brown women and men" of Turkey, as in Spivak's terms, the ordinary people of Turkey are "voiceless subalterns." They seem to forget that Erdoğan was popularly elected in an election with a high turnout, and the majority of Turks believe he defends their interests well. They keep voting for him because they believe he is just like them. The claims of tendencies toward authoritarianism do not come from the majority of Turkish people who are deliberately silenced or preferably unheard, but from a minority that can be heard at locations of power. If and when the subaltern tries to speak about their aspirations and expectations in the future, they are immediately accused of polarizing society. To answer Spivak's question as to whether the subaltern can speak: They are the "brown women and men" and social subordinates in Turkey and cannot be heard due to their historical position vis-à-vis the founding elites of the Turkish Republic. So, the hearts of the speakers at the summit, with their colonial feminism and self-orientalism, break for the women and children of Turkey and the region. If they save any child or woman, all the actions of the West the bombings, occupations and wars – would seem to be justified in a self-congratulatory manner: "See, we told you, this is why we intervene – to save the natives." The privileged West first demonizes their target – here the target is Erdoğan – and then Western journalists and politicians want to save his people from him to appease white middle class guilt – the white man's burden. For them, a non-white Muslim man is a savage, beyond negotiating with; the only way to cope with this kind of person is to overthrow him by all democratic or non-democratic means necessary.

Nowadays the West is interested in understanding Turkish culture, yet misplaces such interest, choosing to focus on cultural differences rather than the culture's historical development. It seems that women's oppression is cited here for political purposes and offered a one-sided cultural explanation instead of a deep historical and political analysis. This misconceived women's oppression could bring international attention to Turkish women and eventually call on the Western savior, as there are always some white sisters inclined to worry about the situation of Turkish women. Abu-Lughod criticizes this rhetoric of salvation. She argues: "When you save someone, you imply that you are saving her from something. You are also saving her to something." It appears that the feeble Turkish opposition can't handle endless defeats gracefully and can't foresee a bright future; thus, they have turned to the West for help. Instead of offering constructive criticism concerning the domestic problems of the country, they choose to complain to outsiders, as they have run out of any hope from the deep state institutions like the military or the judiciary at home. Hence, we must ask again, "Do brown Turkish women really need saving from brown Turkish men?"

* Professor of anthropology in the Department of Radio, Television and Cinema at Marmara University
Last Update: Apr 18, 2016 10:32 am
RELATED TOPICS