EU negotiations and other rat traps: Why Turkey should watch and learn from the Brexit talks in Brussels 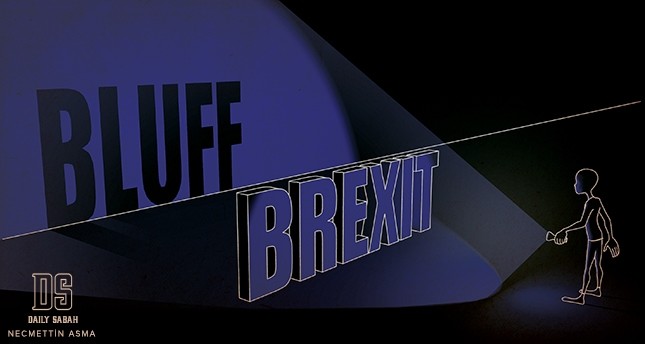 Illustration by Necmettin Asma - twitter.com/necmettinasma
by Martin Jay Jul 15, 2016 12:00 am

President Erdoğan and his administration, charged with EU accession talks, should pay close attention to the Brexit talks, as they will give an indication as to whether Turkey will be treated fairly in its own bid to join the EU

Friends, it is often said, make the best enemies. Theresa May is now the new Conservative prime minister in Britain after the treachery and skullduggery of the party firmly pushed the knife in the back of the man who brought us Brexit in the first place, former London Mayor Boris Johnson - who managed to get himself the post of foreign minister in the new cabinet unveiled earlier in the week.But what a job to take on. Not only will she have to stand up to Scotland's determination to seek independence now and become a new, shiny EU member state, but will have to try and cope with both Northern Ireland seeking its own deal, along with Gibraltar, whose chief minister is so confused about what he wants that he is talking to the Scots, those in Northern Ireland, the European Commission and anyone in Westminster who will receive him. Fabian Picardo, who I interviewed in April, believes he can ride two horses at once and Gibraltar can remain part of the United Kingdom but also negotiate itself a special deal with Brussels to let it have a special EU status, allowing it full unfettered access to the EU with all the benefits that come with it.

Does anyone in this quagmire of treachery better known as the Brexit, believe in such folly, that a country can have all of the benefits of the EU single market but accept none of the responsibilities and remain a sovereign state? I fear Picardo will have to accept that at some point in the future, he will have to ask the 30,000 British subjects on the rock of Gibraltar whether they wish to remain part of the U.K., or seek total independence and become an EU member state.

Indeed, the Brexit has come at a high price.

And this will no doubt be factored into how May negotiates in Brussels. But she will have to cope with the European Commission playing a dirty game on and off the field by firstly already engaging in talk with Scotland's first minister; but also by the very nature of the talks themselves.

It will take someone of her steely character to not flinch at the minefield she is about to tip toe across to get a good deal for the U.K., but also to deal with the multiple faces that Brussels has, which I call the three-sided coin. One, the political euro elite of European Commission President Jean-Claude Junker, European Parliament President Martin Schulz and European Council Donald Tusk; two, individual member states themselves and how unpredictable they can be and, thirdly, the power of the industry lobby, which is not to be underestimated.

But there is no precedent whatsoever for these talks and some might argue that this is a feather in the U.K.'s cap. There is some truth in this but for the best part, Britain needs to know what it is getting itself into when it negotiates in Brussels. May's delegation should be aware that many in Brussels are so terrified that the EU might collapse, that it is determined to set an example to other wobbly EU member states who are also considering a referendum.

And here is where the lies start, mainly from the Eurosceptic British press. The Netherlands will not have one due to legalities as neither will the French, due to only token support from the far right. More likely euro mandarins will be eying Hungary, Greece, Sweden and even Spain as possible candidates for a referendum in the coming months.

And so a race of sorts is on so as Jean-Claude Junker and co can score valuable points with how they handle the U.K., in order to dampen fears in some of these countries. Time is not on their side though.

And so we should expect them to play dirty. But the very basis of the Article 50 text is so disingenuous that you can hardly blame them for taking its conditions as the lead to even greater skullduggery.

Turkey should note that the Brexit talks in Brussels are nothing more than a Venus fly trap, with many hoping that Britain will be the gullible insect about to enter its gaping jaws.

Why have Junker and others pressed so hard for Britain to quickly enact Article 50 as soon as possible? Simply because the moment Britain does that, the tables are dramatically tilted in the direction of the EU. Put differently, if no deal is agreed after precisely two years, then all deals are off and Britain is out. With no agreement that would mean no access at all to the single market for goods, services and people.

The question, which might interest Turkey's euro nerds as they pour over EU documentation, is this: would the EU commission be so stupid as to do such an act?

The media, as usual, are missing the really important point. No trade deal can be negotiated in two years. And that's bilaterally. A trade deal that is multilateral is incredibly complex. The current EU-Canada trade deal for example has, in theory, been agreed after five years of wrangling, but has remained unsigned by the EU due to two further years of quibbling over the small print. A trade deal with 27 member states could take the same time to finalize.

More likely, the EU is looking to be the player that holds all the aces. If it were only the European Commission, then certainly they would play for time, rather like football players who pass the ball back to drag a match out.

But will German Chancellor Angela Merkel let them? She will be under intense pressure from German industry bosses who cannot afford job losses in the car sector in the event of Britain no longer being able to buy German cars. Also, other EU member states might object to the Commission's approach and seek a more "flexible" arrangement with the U.K. and others who chose to leave - an important point raised by the Czech prime minister on the day of the Brexit.

Sensibly, such flexibility would actually be a sensible move towards calming those in the EU who might be considering leaving. But the EU doesn't really do common sense. It will be driven by its own naked desire to use the Brexit to set an example.

It's likely that a tariff free trade deal will not be given to the U.K. and that we will have to pay to send our goods to the EU - especially if May holds out for radical control of EU citizens wishing to come to the U.K. She will no doubt go for the "Romanian option" of allowing EU folk to come but not letting them work, or only in white collar areas, in the City of London for example.

In fact, I would argue, that May's first port of call should be to seek support from countries like Germany first, before bothering to talk to Junker, an official so lacking in personality or verve that he makes a Eurostar rail embankment look intriguing. She might also visit French President François Hollande and convince him that it is not in France's interest to lose Britain's huge revenues it sends to France's champagne and wine industries, almost on their knees since Australia and Chile entered the market place.

Britain has about a 100 billion euro trade deficit with the EU. And yet no one is expecting that to be a strong point of leverage with someone like Mr Junker who is just obsessed about one thing: the EU's own survival.

It will take industry lobbies to convince both Merkel and Hollande that getting a good trade deal with the U.K. is more important to their own job security than the foibles of the European commission. Watch very carefully how the U.K. and EU play this first meeting as it will tell you everything about how vulnerable the EU is to its own chiefs' paranoia and narcissism. Traditionally, the European Commission is usually in the pocket of France and Germany so they will have the ultimate say about how Junker goes about the proceedings. But if there is no sign of progress after a few weeks and it looks like a long, protracted full two-year affair, eurosceptics who dream of the EU collapsing like the Soviet Union, will have their nirvana moment, as this is where such a devious, low-handed tactic will lead the rudderless vessel over the abys. Turkey should take note as to how fair the negotiations are. But it should also note that by the time Brussels gets around to any EU accession deal, the EU as we all know it, might not even be there, but in name only.

* The Daily Mail correspondent in Beirut and a senior writer at Newsweek Middle East
Last Update: Jul 15, 2016 2:57 am
RELATED TOPICS