The polarizing, patronizing and isolating attitude of Western media, politicians and officials 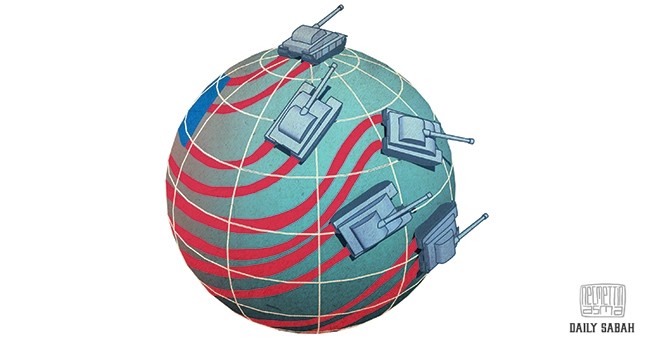 Illustration by Necmettin Asma - twitter.com/necmettinasma
by Ergin Yaman Aug 05, 2016 12:00 am

The issue is not the West as a whole, but the problematic attitude and demeanor of Western politicians, officials and media, which blatantly contradict the values they claim to advocate

The attitude and language Western media, politicians and officials have used in relation to Turkey regarding President Recep Tayyip Erdoğan have unfortunately continued to be polarizing, despotic and isolating both before and in the aftermath of the failed coup. Such language and attitude does not only fuel further marginalization and stigmatization of Turkey, but also rapidly weakens the West's credibility in every sense and terribly damages its image. Having a selective and changing commitment to the fine values of democracy, freedom, tolerance and human rights has now become an undeniable fact when it comes to Muslim countries, as the Western world's sense of democracy, freedom, tolerance and human rights is extremely changeable to the extent that those countries serve the interests of Western countries. This blatant contradiction and selective commitment can no longer be disguised by Western media and politicians' perception operations, which only make the issue more obvious and, as a result, consolidate negative perceptions of the Western world. The idea that the West is against the Muslim world is one of these perceptions that is gaining more ground every day due to this attitude and language.

The electoral mandates that Erdoğan has continuously won have so far had efforts to be discredited and minimized in the Western media and by politicians with claims that he is a polarizing figure with despotic and exclusionary tendencies. This being the case, the attitudes in Western media and of politicians in the aftermath of the failed coup in Turkey have not been any different, if not worse, with what they have been alleging and constantly slamming Erdoğan with. Polarizing, pro-Islamic, authoritarian and undemocratic were some of the favorite terms that Western media and politicians tended to use when describing Erdoğan before the failed coup. Unfortunately, these terms were recirculated during and in the aftermath of the coup in an attempt to divert attention in order to manipulate people in the West. This attempt has been furthered by underreporting the brutalities of the coup and the victimizing language used in reports regarding those who have been purged from public offices due to their links with an organization that Ankara has declared to be a terrorist organization. There continues to be systematic and unified efforts in the West to further isolate Turkey as a country, simply due to the fact that Turkey is reclaiming its identity as a sovereign state in recognition of its historical, social, cultural and religious values.

Regarding Erdoğan's personality, the people of Turkey and the country itself have been subjected to ongoing bullying, alienation and marginalization in the Western media and by politicians. The ongoing denial of the social, cultural, religious and political differences and realities in Turkey continues to result in an ever-growing intolerance and denial in the West. One of the key arguments that the Western media and politicians keep referring to is Erdoğan's alleged polarizing and non-inclusive language. What about the language from Western politicians and media? How inclusive has their language been so far? The only section of society in Turkey that appears to be favorable to Western media and politicians are those who have distanced themselves from Islam. How congruent is this with appreciation of diversities? Sadly, the fact that the significant majority of the people in Turkey are Muslim and thus their lifestyles and world views are different to those in the West, does not seem to have any appreciation or value. This is evident from the stigmatizing language that is used and critiques voiced. "Pro-Islamic" is one of the terms used in the headlines when describing Erdoğan. With such phrases, the Western media gives warnings to their readers and viewers that Erdoğan is a potential threat because of his religious identity. Unfortunately, religious references are only used negatively when it comes to Muslim leaders. We do not see similar headlines concerning other politicians. We do not see stigmatizing references such as pro-Zionist, pro-Jewish or pro-Christian used when describing politicians who uphold these values. Even if they are used, negative connotations are not attached to such words. This, in reality, shows the level of ignorance, intolerance and denial of Islam as an identity. The majority of society in Turkey is Muslim and, as such, there is nothing more natural then to enjoy the values of the society that he represents. So why is there an insistence to stigmatize him? Looking at the language used, one would think that there is a threat to non-Muslims in Turkey. It is an unfortunate reality now that the West looks at the Muslim world through its own cultural, social and economic realities instead of appreciating those countries' own cultures, diversities and social facts to try to understand them in line with these realities.

That Erdoğan is allegedly authoritarian is another term that is always brought up in discussions and criticism. The allegation is that he interferes in every possible sphere of life. But what about Western officials, leaders and politicians who do not loose out on any opportunity to interfere in Turkey's domestic matters? We have heard some Western leaders and politicians massively criticizing Turkey's declaration of the state of emergency only for them to declare it themselves within a few days after criticizing Ankara for declaring a state of emergency. Again, we have seen Western politicians and officials recklessly give strong remarks in relation to almost every nationally significant domestic matter so far. How democratic is this? We see how the Western media, politicians and officials could create a tempest in a tea cup over a controversial matter of freedom regarding a member of the press like Can Dündar, who is accused of espionage. But when it comes to freedom of countries we see them using every opportunity to interfere with the freedom of Turkey as a country. How consistent is this? What could be more despotic and authoritarian than this? Unfortunately, there is no appreciation of immediate internal and external national security risks that Turkey is facing as a country. Even in the highest national security situations, the expectation is that Turkey does nothing about the risks it is facing. For example, Ankara's efforts to purge public offices of staff members that are linked to the Gülen Movement, which Ankara has deemed the Gülenist Terror Organization (FETÖ), is twisted in the Western media as Erdoğan's purge. The language used in the media to describe the employees that are being removed from public offices due to their links to this organization is extremely victimizing, and again extremely twists reality, as it wrongly claims that Erdoğan is using the coup as an opportunity to get rid of his opponents. There is such a desperate effort to avoid mentioning the coup and its brutalities, that the organization that conducted the coup has been declared a terrorist organization and that its members who are employed in state offices are a threat to national security. In the aftermath of the 2011 riots in the United Kingdom, all the looters and rioters who could be identified from CCTV footage were prosecuted and most of them were imprisoned. The U.K. riots are nowhere comparable to the brutalities of the failed coup in Turkey, but the consequences for those involved were severe. The question is what would have happened if these riots were plotted by an organization that decided to use tanks, warplanes and helicopters on people in the U.K.? Would, for instance, the British government have allowed employees that were linked to such an organization to carry on with their jobs? We all know what the answer to this question is, and so it is a moral duty that Western politicians and officials adopt a position they would normally adopt for their own country if they were in a similar situation.

On a completely different note, where do Western politicians get the right to tell another country what to do? How democratic is this? How would Western countries react if Turkish officials were not only issuing remarks daily about their domestic issues, but telling those countries what to do and what not to do? Was this very issue not one of the main reasons why the United Kingdom voted to exit the European Union, as a considerable number of people felt Brussels was becoming too much by interfering in their public policies? Well, what about Turkey? The fact that Western countries are powerful economically and militarily and thus can patronize any country is nothing but large-scale bullying. This is literally what Turkey has been facing in the last few years - unified bullying by the Western media, politicians and officials.

Unfortunately, the West's democracy is to the extent of the treatment that a different voice like Britain's current Labour leader Jeremy Corbyn is receiving. Just because, Corbyn differs from mainstream politicians and has different opinions on certain things around the world, he has been subjected to brutal media attacks from day one of being elected, despite being elected with 60 percent of the vote from Labour members. The efforts to oust him are ongoing and will probably continue until it is achieved, but it is a perfect example that there is no tolerance in the West when there are politicians with non-mainstream arguments or world views. Unpatriotic and anti-Semitic are some of the key arguments used to discredit Corbyn in and outside of his party. If being allegedly unpatriotic and anti-Semitic is enough to deny a politician entrance to the political arena, what about the efforts of Western countries' only alliance with unpatriotic and Islamophobic politicians, circles and leaders in the Muslim world? Why is it that unpatriotic or anti-Semitic politicians are unacceptable in Europe but unpatriotic or Islamophobic politicians and leaders are promoted in the Muslim world? Why is there not the same reaction against Islamophobic leaders in and outside of the Muslim world?

It is important to clarify here that the issue is not the West as a whole, but the problematic attitude and demeanor of Western politicians, officials and media, which blatantly contradict the values they claim to advocate. Similarly, this is not an issue of West versus East, but unfortunately it has been turned into one by the polarizing, patronizing and isolating language and attitude in the Western media and from politicians and officials. This ongoing pattern is one that only weakens the West's credibility in every sense and massively damages its image.