A new reality between Turkey and Russia 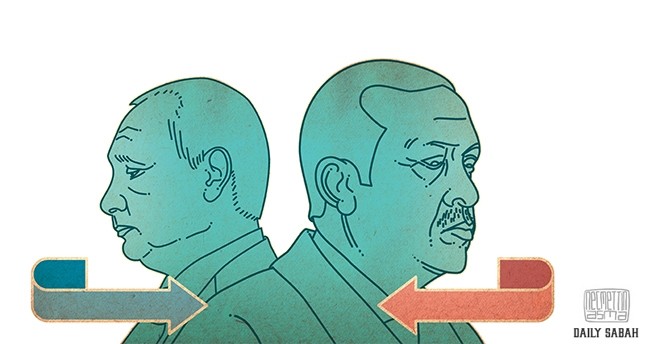 Illustration by Necmettin Asma - twitter.com/necmettinasma
by Maria Beat Aug 10, 2016 12:00 am

President Putin's call to President Erdoğan after the July 15 coup attempt triggered the new approach between Turkey and Russia. While balances are being reformed in the new world system, this development will certainly play a crucial role

Turkey and Russia's friendly relations are speedily coming back. The warmongering rhetoric has faded for good, bilateral diplomatic activity is on the rise and the countries' leaders met in St. Petersburg on Aug. 9. Seven months of bitter hostility looks to have gone into oblivion and dialogue at the state level has re-emerged.

This is a very timely development, as our world is caught in turmoil as never before and a concerted international effort is the very means to rescue it. Changed for the better, Turkish-Russian relations may synergize a new dimension to contribute to resolving the most burning conflicts in the Middle East, and in Syria in particular.

The expected change would impact Turkish-Russian relations in trade and economy as well, and the efforts made today are marked by commendable determination. On July 22, Russian Prime Minister Dmitry Medvedev ordered to resume the activity of the Turkey-Russia Joint Intergovernmental Commission on Trade and Economic Cooperation, which had been put on hold last autumn. With this, Russia brings its co-operation with Turkey back to normal. As a follow up, Deputy Prime Minister Mehmet Şimşek and Minister of Economy Nihat Zeybekci were in Moscow to work toward mending the once mutually beneficial cooperation.

The timing of this rapprochement is of particular note, as it is happening when the world at large reluctantly watches the goings on in Turkey in the aftermath of the July 15 coup attempt. Russia does not have time to waste sitting and waiting, as more than half a year of deteriorated ties has badly hurt both countries' economies. The Turkish-Russian trade turnover for January to May 2016 was down 48 percent compared to the same period of 2015.

During the seven months of the Turkish-Russian rift, the world has changed a lot, and not for the better. Terrorist attacks, war and aggression have increasingly become an element of life all around the world, including in once peaceful Europe, pulling a shadow over the stability in Turkey.

To add to the commotion in the world, there was a coup attempt by Gülenist Terror Cult (FETÖ) on July 15 in Turkey. The country has experienced coups in the 1960s, '70s, '80s and '90s, which resulted in a change of power at the helm, but not this time, as the mutiny was suppressed in a matter of hours. It proves that Turkey has developed into a very different country since then and that it has a very different and strong national leader overwhelmingly supported by his people.

Europe got a heavy shock in the last days of June when British voters opted to leave the EU in a national referendum. Developments surrounding the post-Brexit events reveal that neither the U.K. nor the EU has a roadmap for how to further proceed.

Nevertheless, regardless of what happens with the Brexit, the EU will hardly remain the same. The long-required reform of the institution now seems to be of the utmost priority, since its very existence is at stake. An unprecedented refugee crisis places an additional burden on the EU, and its remedy requires a concerted international effort.

Turkish-EU relations are well-established. Ankara has been engaged with its EU accession for more than 50 years and the ongoing process has become a pillar of various Turkish foreign political initiatives. This status quo may change in the light of the Brexit aftermath and post-July 15 coup attempt developments. Questionable as well remains the Turkish-EU refugee deal signed on March 20, which is still waiting for its full implementation. Waiting continues for the EU granting Turkish nationals visa-free travel and the EU's payment of the envisaged 3 billion euros to Ankara has yet to fully materialize. Under these circumstances, Turkey's foreign policy may experience a shift and the Turkish-Russian rapprochement could well play its role accordingly. In the meantime, keeping balanced relations with Russia and the EU is a must for Turkish foreign policy. It is not a matter of choice between them, as Foreign Minister Mevlüt Çavuşoğlu said in early July.

Russia has always enjoyed a special relationship with the EU, although their current relations are strained, and actual interaction has been on stand-by for more than two years. Russia has never had plans to become an EU member state, but does eagerly engage in its programs and initiatives when relations are good. The situation changed dramatically when the Ukrainian crisis broke out and the EU imposed sanctions on Russia that triggered retaliatory Russian restrictions on the import of certain goods and services from EU countries. To add more, Russia's foreign political doctrine experienced a change in which tension and hostility seem to prevail over the search for mutually beneficial cooperation with the EU.

No doubt the international reality has changed dramatically during more than half a year of strained Turkish-Russian relations, although now they are receiving a fresh boost. The anticipated rehabilitation will be impacted by recent developments, be they from politics or the economy.

From 2014, the EU's sanctions and Russia's counter measures have continued to impact its overall economic, financial and industrial development while triggering structural changes of domestic production and imports market. At its start, the process gave an additional boost to Turkish-Russian interaction, but all was put on hold after the jet crisis in November 2015.

Today, the once flourishing business cooperation has a good potential to be restored to pre-crisis levels, although how soon remains to be seen. Trade is its major component and Russian natural gas has been a prime item of Turkish imports, while consumer goods and seasonal fruits and vegetables used to account for the largest share of Turkish exports to Russia before the crisis.

Russian restrictions on import of food items from the EU and later Turkey after it shot down the Russian jet served its domestic producers a good service. They got motivated to boost local production in order to meet a suddenly emerged market demand with hardly any foreign competition. The imports replacing program got overall support from the Russian government to trigger the emergence of such productions as Russian parmesan - a weird sounding thing to the Russian ear. It did not take long for the results to show, as today Russian producers claim to have replaced the importers by two-thirds. Russian consumers are now caught in a nostalgic process of discovering anew the home-made products that disappeared from their supermarkets some 20 years ago and replaced by their foreign-made analogues. Gone are the days when French milk was sold at Moscow supermarkets.

NEWCOMERS TO THE RUSSIAN MARKET

In the meantime, the ban on deliveries of Turkish fruits and vegetables left a substantial niche of Russian imports market empty that had been occupied before by Turkish produce for some 20 years. Russian agricultural producers admit today that all those years, the solid presence of cheap but modest quality fruits and vegetables from Turkey cut short any motivation to foster local production of agricultural products. The situation changed last autumn with the closure of Russia's imports market for goods and services from Turkey. It triggered an additional boost in local production supported by the government. Tomatoes from southern Russia, Azerbaijan, Kazakhstan and Uzbekistan replaced those from Turkey, competing with them in price and quality.

The newly emerged reality also opened a window of opportunity for fruit and vegetable suppliers from Latin America, Morocco and Egypt as well as from members of the Commonwealth of Independent States (CIS). In 2016, Uzbekistan alone has increased its agricultural exports 30 percent with 60 percent of the increase to Russia. Uzbek exports of wine grapes to Russia increased 20 times over.

As a result, the newcomers, be they local producers or newly emerged exporters, today hold quite a solid market position and have no plans to share it with anybody. It is they who will be the main competitors of Turkish companies coming back to the Russian market after half a year of absence.

Turkish goods are well-known in Russia and traditionally generate solid demand due to their reasonable prices, although occasionally at the expense of quality. Getting back a once solid share of the Russian import market may now pose certain new challenges to Turkish suppliers.