A coup attempt on Europe's soil 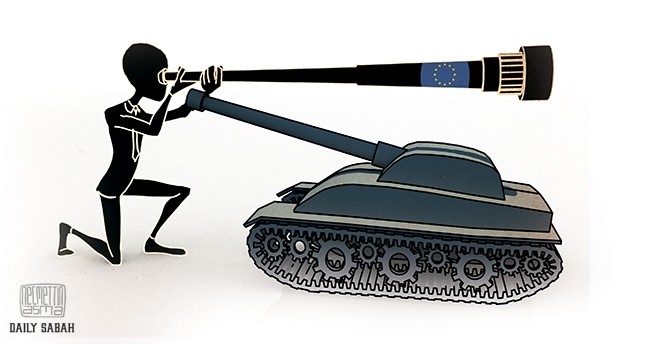 Illustration by Necmettin Asma - twitter.com/necmettinasma
by Markar Esayan Aug 22, 2016 12:00 am

The EU is now at a crossroads. It will either be defeated by discriminatory policies, "closing itself to the other" and skepticism or exit from this blind alley with a brave move forward, advancing to maintain their ambitions

Turkey witnessed a coup attempt that targeted capital Ankara and the country's largest city, Istanbul. Crypto-Gülenists disguised in uniforms of police officers and soldiers who had infiltrated the military took action in all 81 provinces, killing 240 civilians, including men, women, children, the young and elderly, wounding more than 2,000 people. The death toll continues to rise unfortunately, as those who were critically wounded have died.

This piece has an "old-fashioned" introduction, because the scale of this great disaster has not yet been sufficiently understood. Of course, this failure to "understand" is not about Turkey per se. Despite the harsh political atmosphere within Turkey, the people in the country see no ambiguity about the the night of July 15 being an assault against democracy, the elected Parliament and the people. The coup attempt was unanimously condemned by all parties, media outlets as well as the public. Everyone watched live, witnessed, and suffered that brutal assault by the crypto-Gülenists who attacked even the Parliament, media outlets, municipalities and strategic institutions, and even directly targeted civilians, using fighter jets, tanks and ammunition that were bought with taxpayers' money. They went through a severe trauma.

That's why the entire nation united under the leadership of President Recep Tayyip Erdoğan, who survived several assassination attempts that fateful night yet landed at Istanbul's Atatürk International Airport, one of the centers of the coup attempt. The main opposition parties, the Republican People's Party (CHP) and the Nationalist Movement Party (MHP), immediately took a clear stance against the coup. The co-chairs of the PKK-dominated Peoples' Democracy Party (HDP), however, at first watched how the coup attempt progressed. HDP Co-Chair Selahattin Demirtaş jumped at the Gülenist provocation "Some soldiers were beheaded on the Bosporus Bridge" and accused the people from all walks of life (devout people, secularists, Kurds et cetera) who took to the streets of being supporters of DAESH terrorism. But at dawn when the coup was averted, when it turned out that these allegations were mere disinformation, that the people had stood against tanks without resorting to violence, and that hundreds of thousands of Kurds in southeast Turkey had poured into the squares, Demirtaş took a position against the coup.

During his visit to Turkey 20 days after the attempted coup, Thorbjorn Jagland, the secretary-general of the Council of Europe (CoE), stated that the conspicuous absence of solidarity visits from Europe to Turkey, together with remarks by EU politicians expressing concerns about the protection of the rights of putschists were misunderstood, and that European leaders had no intention to be unsympathetic. He asserted there was a misunderstanding and that the Turkish view of the events should also be taken into account. Jagland said: "Different news reports about the events appear in Europe, and unfortunately not all of these are correct or based on facts."

As a member of the Parliamentary Assembly of the Council of Europe (PACE), I know Mr. Jagland personally, and we have met several times to discuss Turkey. He has quite objective and brave views regarding Europe and is open to criticism.

I "think" Jagland is aware that Europe and European institutions failed the coup test on the night of July 15, and is trying to minimize the resulting damage. He must be aware that relations were damaged and that Europe is responsible for that damage. So he states that a process of "mutual understanding" should be launched to repair the damage and restore confidence between Turkey and Europe. According to Jagland, this process of understanding should be based on three pillars:

1 - A coup attempt took place on Europe's soil. This is not acceptable!

2 - This coup attempt was staged by a secret network nested in the center of government agencies. There is a clear consensus on this, and both the government and the opposition parties are in agreement. No state can tolerate soldiers or police officers receiving instructions from outside of the official hierarchy and no state can let judges have ties to a shadowy network which effectively cancels their independence. These are unacceptable within the context of the rule of law.

3 -- The fact that hundreds of people were killed and thousands more were wounded is an outrageous affront to human rights and political rights. This is an assault on all of us, just like the heinous attacks with firearms on Charlie Hebdo and Bataclan and like the cowardly attacks in Brussels and in many other European countries. This attack on Turkish people is an assault on all of us.

It must be pointed out that Jagland has made similar remarks in the past. Turkey is a founding and key member of the CoE. The institutional stance of the CoE is very important. We hope this will be emulated by other European institutions as well. For in the final analysis, these are the institutions to which we need to pay special attention. In a previous address to the CoE, Jagland remarked that the European Union is quickly being dwarfed in terms of population, economy and is losing political power, severely criticizing the ascendance of national policies over the union's policies.

Former Swedish Prime Minister Carl Bildt was among the first prominent figures to criticize the failure of Europe to duly react to the July 15 coup attempt and to criticize misleading reports in the media. In other words, decent Eurocrats like Jagland and Bildt are aware of the attitudes toward Turkey that are based on double standards. Turkey does not think that the long-held bias against Turkey or the sympathy shown toward putschists on July 15 stem from a misperception, nor is Ankara being tetchy. Turkey is a European country which has persistently waited at the EU's door for 58 years, always trying to advance relations. It very well knows its European friends and what their codes mean.

Though this has led Turkey and the EU to a nasty standoff, I believe that the problem is not actually about Turkey, but Europe itself.

The EU has difficulty placing itself on a firm basis and achieving a people-oriented balance between European values and varied divisive interests. "Self-criticism," perhaps the most valuable aspect of European civilization and even its "breeding ground," is quickly replaced by "suspicion of the other." Along with economic, demographic and political atrophy, centrist parties have drifted to irrelevance, while racist movements fueled by Euroscepticism have moved rapidly toward political power. Under these circumstances, centrist politicians appeal to discriminatory discourses, especially during electoral periods, as we witnessed during Britain's Brexit referendum. Political and economic frailties have led to democratic atrophy. Hence when adherence to European values, which are ignored first and foremost in Europe itself, are imposed upon candidate countries, they evoke a hollow discourse and lose their old appeal.

The Brexit itself revealed a Britain which is leaving a powerless Europe in the context of a new global order, one created via the Middle East, wanting to shed all responsibilities that shackle it.

The EU is now at a crossroads. It will either be defeated by discriminatory policies, "closing itself to the other" and skepticism or exit from this blind alley with a brave move forward, advancing to maintain their ambitions.

It goes without saying that this move entails accepting Turkey into the EU.

This requires self-confidence and courage. Self-confidence and courage, in turn, manifest themselves not through populist and banal emphases on culture, but through genuine confidence. If European civilization does not stretch beyond Maritsa River into Turkey, if Europe is afraid to do that, unfortunately the move would be backward. This will bring about not only the disintegration of the EU, but every single European nation will face utterly negative impacts.

Europe should then bravely confront the reasons that led it to betray its own values on July 15 (and during the coup in Egypt as well, of course), not for the sake of pleasing Turkey - not for that reason in particular - but for the sake of the future of Europe. It would be a more constructive approach to avoid justifying Islamophobia by referring to radical terrorism, but evaluate Islam instead within the context of redefining the boundaries of European culture. The prevalent idea in Europe that the rest of the world should unquestioningly embrace European civilization and that European culture represents the pinnacle of human civilization must be questioned. One of the reasons behind the attitudes toward July 15 is the refusal to understand some different cultural codes, like Islam, or to respect such a Western and advanced democracy as Turkey, instead regarding them as risks and categorizing them. These of course also pave the way for the practices of othering and leads to the rise of racism.

Every structure that sees itself as complete and perfect is at grave risk.

Of course, Turkey should also understand that Europe is in a difficult situation and is confronted with many problems. Yet Turkey is more ready to understand Europe. The views of Jagland quoted above should have been stated by other European politicians from the first days onward. Until they conduct that self-investigation in a calm manner, no one can expect this country, whose people stood up to tanks during the coup attempt and whose president barely survived assassinations, to console itself with the opinions listed in this piece. I myself am a member of PACE and know well that Turkey has been grappling with these double standards and biased reports for years already.

Since it is impossible for the DAESH terrorist group to hold a rally in the heart of Ankara, Europe cannot expect Turkey to understand how the PKK terrorist organization, which has killed tens of babies in just the last month, was able to hold demonstrations in Brussels' squares. It must be admitted that there is a serious problem here. Luckily Europe and Turkey are neighbors. We must appreciate this.
RELATED TOPICS