Out of the chaos of the Syrian civil war... 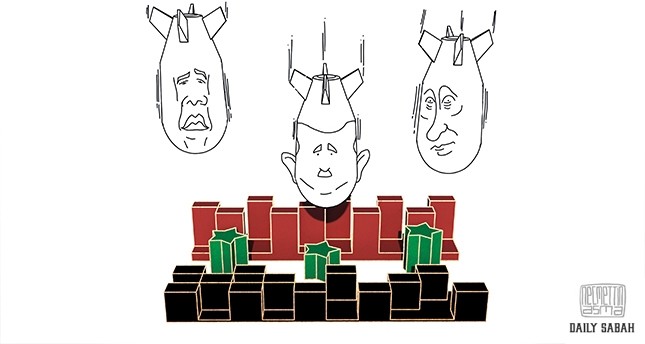 In times of structural crisis the task of political leadership has to be strategic not just tactical; it needs to not just react to the events unfolding but to promote a fresh vision of societies bound by the idea of Islam not as a mask for power and greed, but Islam as an instrument of justice

The haunting image of five-year-old Omran Daqneesh, bloodied and covered head-to-toe in dust, sitting in a daze in the back of an ambulance and waiting to be driven to one of the few hospitals still in operation in Aleppo, has become a symbol of the horror of the daily bombardment of the besieged city. Omran, who was born the year the war between the Assad regime and the rebels began and therefore has only experienced war throughout his life - was pulled from the rubble of a bombed building. His older brother was not as lucky and died from the wounds suffered in the same airstrike. The city - once the country's major commercial center - is now a mountain of debris and ruins.

There are so many stories like this and they keep coming. How can the carnage and cruelty that is swallowing Syria be stopped?

Through the vortex of the civil war it is difficult to stand back and see the main fault lines that are driving the violence. There is no vision that allows us to see behind the bloody horrors of barrel bombs, beheadings, refugees, chemical weapons... and the prospect for a cease-fire, let alone a peace is constantly dimming. The dream of total victory on the battlefield seems to be held by only the delusional or the deranged. The Baathists and their allies believe that once enough people have been butchered they will be able to go back to way things were before the Arab Spring the time of long winter of mukhabarat rule. Those who oppose the Baathists believe that one more push, will bring about a day of reckoning and the Assad clan will go the way of Saddam Hussein and his gang. However, given the range of armed actors with contending aims, it is difficult to see how a quick victory is possible. There are civil wars in parts of South America, Asia and Africa which have lasted a generation or more. There is no reason to assume that this will not be the fate of Syria; a generational war in the region will defer prosperity, will defer the possibility of popular rule - and that is, no doubt, the cynical calculation of some.

In the absence of a likely imminent military solution, how can the war be ended? Diplomacy has had limited success and the humanitarian relief is like a band-aid on a gaping wound it is better than nothing but it is not a cure. What is needed is political leadership that goes beyond the immediate, which can see past the chaos and understand that what is at stake in Syria is not just a geopolitical prize but something more.

In 1941, at time when the Nazi war machine was sweeping all before it, the possibility of defeating the Axis powers seemed a distant dream. The American President and British Prime Minster met to discuss what a future peace would look like, and signed the Atlantic Charter - a document that stated the principles that would help shape the post-war world. It contained eight points - among them the principles of self-determination and free trade - "on which they base their hopes for a better future for the world" in a new global order. The Atlantic Charter gave the Western Allies' war effort a purpose that went beyond the status ante bellum; it made the war a struggle not for interests but also for values. Such an undertaking helped win the war because it provided an alternative to the world that the Nazis were destroying.

As we witness the carnage in Aleppo and other Syrian and Iraqi cities, the desperate attempts of tens of thousands of people to escape the conflict, and the constant sense of helplessness that most Syrians are experiencing, we need to think some about answers to the difficult questions this conjuncture is posing. In wars without purpose, the spiral of violence knows no bounds and continues spinning. If serious actors are serious about ending the civil war, they need to find a narrative that binds these desperate actions that can point to a new regional order. The task is not just how to rebuild Syria and whether it will be a federal entity, or how much federalism there will be... these technical questions are important but secondary. The primary consideration is that the war has to be understood not in national terms but, rather, transnationally. Nationalism is an obstacle to any settlement. The xenophobic nationalism of the Baathists, the nationalism in Iran and Turkey cloud the imagination of what is at stake in Syria.

On 15 July the coup against the legitimate government of Turkey was defeated. This can be seen as marking a halt to the counter-revolutionary forces that toppled Egypt's Mohammed Morsi. The defeat of the 15 July coup creates the potential to restart the process by which the people of the region become stakeholders in the governments of the region. What is needed now is a new bold Islamicate imaginary that goes beyond technocratic details of conflict resolution and is capable of laying down the principles by which the future of the region can be built. A future not dominated by the false choice between tyrants and thugs. The contours of a such a charter have to be based around the rejection of absolutism as a principle of governance, the rejection of takfirism as a principle of faith, and the rejection of xenophobic nationalism as a principle of nation-building. Governments with popular support in the region have a responsibility to articulate a new vision offers the people of the region a better choice than rule by tyrants and intimidation by thugs. In times of structural crisis the task of political leadership has to be strategic not just tactical; it needs not just to react to the events unfolding but to promote a fresh vision of societies bound by the idea of Islam not as a mask for power and greed, but Islam as an instrument of justice.