Mosul simply has to be won, if for nothing else than the legacies of those who conceived it 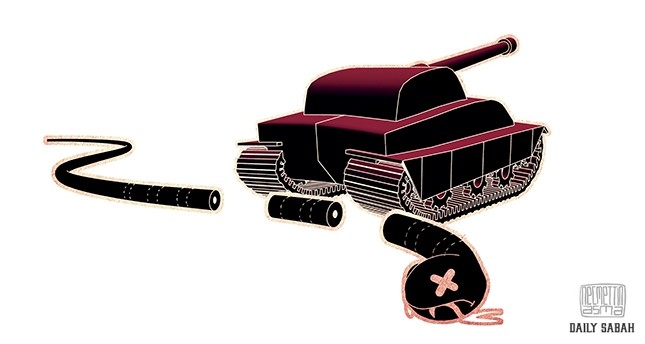 Illustration by Necmettin Asma - twitter.com/necmettinasma
by Martin Jay Oct 22, 2016 12:00 am

Can Obama sign off his presidency by winning the war against terrorism? And can Clinton take the credit?

Herbert Hoover once said at the end of World War II that it is older men who declare war. But it is younger men who must fight and die. Pity then the Iraqi leader Haider al-Abadi. who stands in the midst of an ethnic cauldron of fighting factions in Iraq who all want to lead the battle to take Mosul, a city that is infamously associated with Saddam Hussein's supporters who later arranged for Daesh to effortlessly take it in 2014 and make it their epicenter of lunacy and barbarism. He is not bothered by such a dilemma of young and old and appears sanguine in front of the cameras. But away from the flashbulbs, al-Abadi must consider the implications of letting the Kurds do the brunt of the fighting or let his own Shiite militias step up to the prodigious task. The subject is a touchy one and even led a few weeks ago to reports that the Shiite militias - euphemistically called the Popular Mobilization Forces - were going to stand down and let the Iraqi army and Kurdish peshmergas liberate old city whose history goes back to 400 B.C. There's a lot of confusion and distrust as many Shiite leaders in Iraq believe there is barely a cigarette paper between many Sunnis living in this area and Daesh and that some still would prefer to live under the extremists rather than a Shiite-led government in Baghdad.

Mosul, which means "junction" in Arabic, represents so much more than merely a crossroads city which Daesh used as a stronghold. True, when it falls, the extremists will all congregate in the north east of Syria in Raqqa; indeed many argue that the strategy of letting Daesh fighters know of the build up to the battle allowed a lot to escape anyway through "rat lines." But for al-Abadi and Masoud Barzani from neighboring Kurdish Iraq, the prize is still a great one to behold. For al-Abadi, his political security could be galvanized despite clinging on to the job of Prime Minister of a country which has endemic corruption, rising levels of poverty and little for the youth to look forward to. Al-Abadi is not a man weighed down by political trophies but he has at least tried to reconcile with Sunnis and bring them in out of the cold.

For Barzani, whose dream is to create a Kurdish state, the spoils of war are considerable. Although not in Kurdistan, but in Iraq proper, many believe that if the Kurds take Mosul, then the province which it is the capital of, could be part of a de facto Kurdish state in itself - which is the crux of why an ongoing spat has been reported on between al-Abadi and the President Recep Tayyip Erdoğan.

But it's not only these three regional leaders who have much to win or lose in Mosul. The Americans also see a Kurdish victory betrothed to Washington as the possibility of a new satellite state in the region which gets Israel status. Far-fetched? Certainly Hilary Clinton is anxious to back the Kurds as she recently said on the tawdry TV debate which some Trump supporters believed left him back in the race.Mosul is important for Clinton and Obama for other reasons. For Obama, his entire legacy as the first U.S. president who was mocked by Arabs for not having the gusto in Syria in 2013 to hit the regime when it overstepped his own "red line," dangles on a thread. If in the coming weeks, U.S. media coverage can give him the crucial positive story in the Middle East that he craves, it would undoubtedly be a win-win for both him and Hilary, who would no doubt bask in that glory.

Recent months have seen the Iraqi army, backed by a 60-nation air coalition led by the U.S. retake swathes of the country and many experts believe that despite Barzani's recent statement confirming his fighters' intent to liberate Mosul, it will in fact be down to Iraq's Shiite militias, with the Iraq army - as well as around 8000 new Sunni tribal fighters of al-Abadi's - both playing a remedial role. If this is the case, Clinton and Obama might want to prepare themselves for a media fandango which will play straight into the hands of Trump apologists. It's said that those same Shiite militias will carry out brutal acts of atrocities when they capture Daesh fighters and even with the locals who they have many scores to settle. War crimes by those victors might not chime well with lede writers in Washington who, as a belated act of petulance, might want to use the atrocities as a final eulogy of Obama's lack of impotency in the region. And Clinton won't be able to claim to the press that she was not part of the blueprint, as she did when Obama crossed his own 'red line' in Syria, when she is so up for the fight. How much longer can she keep jumping in the Obama ring when it suits her before scuttling out when the press points out annoying truths? Many journalists in Beirut are already looking at Mosul and doing a head count of colleagues who are behind her verses those in the Trump camp such is the gravitas of Mosul being a PR disaster. When taken, it will be the largest refugee relief operation ever in the region with something like one million people in dire need of help, including those who risked the minefields at night to leave. Refugee camps are expected to be erected along the Iraqi Kurdistan border about 20 miles from Mosul.

Whoever leads the battle of Mosul will write the history annals and will find fair weather friends in Washington who will no doubt up the ante of a recent promise to send Kurds $400 million for their army.

History has shown us that so much depends on timing. And Obama so badly needs a victory in Mosul as well as a neatly timed assault in Raqqa, Syria to salvage him from the scorn of those who write his memoirs.

But it has also shown us that western powers rarely trust the Kurds for very long before selling them out so Clinton better know what she's doing if she has given a nod and a wink to her friends in Irbil. They might be one step ahead of her.