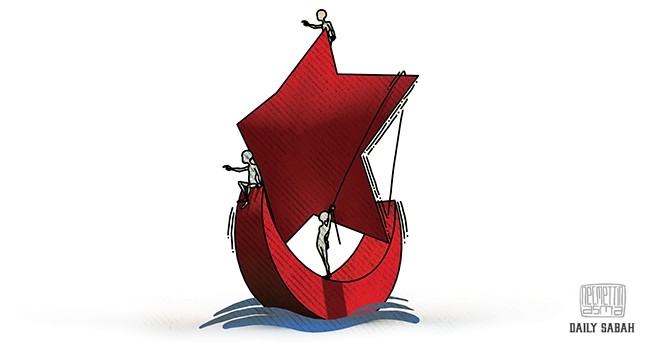 Debates in Turkey over a presidential system are actually not a new thing. Almost all second or third-generation Republican era political leaders indicated that a presidential or semi-presidential system would serve Turkey better. There were several reasons for this preference. The first was recurrent military coups by civilian and military bureaucratic tutelage, and their tinkering with the Constitution to narrow down the space for elected governments. Over time, a bizarre system of government took shape, which was meant to act as a sort of overseer of the elected but to allow for military coups once the elected overcome these obstacles.

It is not just that; Article 35 of the Turkish Armed Forces Internal Service Code, which says, "The duty of the Armed Forces is to protect the Turkish homeland and the Turkish Republic as defined by the Constitution," served as a legal pretext for successive military coups. The military's active role in the administration of the state dates back to the inclusion of the chief of staff (serasker) of the newly formed army in the state protocol by Sultan Mahmud II after the forced disbandment of the Janissary corps in 1826 as part of military modernization.

That notorious Article 35 was amended in July 2013. As you know, however, the Gülenist Terror Group (FETÖ), another vanguard movement nestled in the Turkish Armed Forces (TSK), staged an attempted coup against their own people on July 15.

Hence, constitutional amendments per se or the elimination of tutelary articles and bylaws inserted here and there have failed to prevent vanguard movements determined to take up arms against elected governments and Parliament.

Almost every elected government and leader after Mustafa Kemal and İsmet İnönü faced a coup. Thus, a supreme organ in the administration of the state came into being, which intervened in governments whenever its self-styled red lines were crossed, disregarding people's choices and decisions taken by elected governments and Parliament. Sometimes, the intervention resulted in the hanging of the prime minister and ministers, as in the May 27, 1960 coup. Sometimes, as in the Feb. 28, 1997, coup, the intervention was staged by mobilizing the media, business world, unions, universities, judicial institutions and NGOs. But they were staged in any case.

Of course, it's impossible for a culture of democracy to develop under such circumstances while the country is rotting from inside. The interest and confidence of citizens in politics waned. Vanguard movements have caused enormous damage to Turkey. Unfortunately, the West has supported the "good boys" behind such coups. Or as in the case of FETÖ's July 15 aborted coup, it was directly involved in it. We see the same bad habit in Gen. Abdel-Fattah el-Sissi's coup in Egypt and in the history of South America. Can anything good come out of this? The answer is no, as we see it. Today, confidence in the U.S. in the Middle East, including Turkey, and almost all over the world, is at zero level. This is not good for the U.S., either.

Getting back to Turkey, what those opposing the presidential system also admit is that there is a hitch in the system of government. First of all, it's quite difficult to say, despite appearance, that there is a parliamentary system in Turkey. The principle of separation of powers, the foundation of democracy, has been violated due to the intertwining of legislative and executive branches. The leaders of the 1980 coup created a stronger presidency endowed with substantive political powers by the 1982 Constitution to allow for exerting pressure on elected governments. After the constitutional amendments of 2007, a hybrid system that is more akin to a semi-presidential system with interlocked powers emerged.

As you may remember, military and civilian tutelary elites tried to get involved in the approaching presidential election in 2007. The Justice and Development Party (AK Party) was able, thanks to its parliamentary majority and the applicable constitutional rules, to nominate a presidential candidate, and Parliament was able to elect that candidate. The military issued a memorandum around midnight on April 27, 2007, to prevent this. The memorandum openly threatened the government. Evidently, the military demanded that the presidency, which was seen as the overseer of the establishment, be a matter of negotiation and an agreed-upon candidate instead of the AK Party's be elected. Although the ostensible reason for its opposition was the "headscarf-wearing wife" of the AK Party's candidate, the real reason was about which power would control this office. (If the AK Party's candidate, whose wife wore a headscarf, were elected, it would mean the end of the secular republic.) Sadly, there were many sharing that shortsighted view.

For the first time in history, the government did not step back in the face of a memorandum and responded with a counter-memorandum. In the snap election that immediately followed, the AK Party increased its vote from 34 to 47 percent and secured huge popular support. However, this could not prevent further interventions. This time the Supreme Court of Appeals prosecutor claimed that two-thirds of the deputies (367), rather than the simple majority (276) of them, needed to be present for the first round of presidential voting to take place. The AK Party had 363 seats in Parliament in 2002 and 341 seats in 2007, falling short of the required 367 seats.

Thus, to overcome the intervention of tutelary elites, the AK Party took to referendum a constitutional amendment that envisaged the election of the president by popular vote. The constitutional amendment received overwhelming support (68 percent) from the people. Since [the new president] Abdullah Gül was elected according to the old system, the new rule for the election of the president by popular vote was to come into force at the end of his tenure in August 2014. And as you know, Recep Tayyip Erdoğan was elected as the president of Turkey with 52 percent of the vote.

Consequently, the primary responsibility for these developments rests with the bureaucratic tutelage and its illegal, non-political and immoral interferences. The current system is crippled by various anomalies. The powers of an elected prime minister and an elected president overlap in many areas, leading to jurisdictional disputes. Moreover, the president is given quite extensive powers for an essentially parliamentary system, while having no political accountability. On the other hand, in a system that allows a party to come to power with 35 percent of the vote and appoint a prime minister, the president has to win 51 percent of the vote. This, in turn, means that with some exceptions elected prime ministers will take office by receiving fewer votes than elected presidents. In this case, presidents will always enjoy stronger legitimacy than prime ministers. Currently, problems are at a minimum, since both the president and the prime minister are from the same party. But considering Turkey's harsh political climate, it's clear that this situation poses a serious risk for the country in case rival parties hold these offices.

Turkey, which faced a coup and invasion attempt unprecedented in its brutality and scope on the night of July 15, has managed to get through this process under Erdoğan's strong leadership and with the help of the democratic awareness of its citizens. Not only AK Party supporters but also a great majority of citizens outraged by this treacherous invasion attempt waited for President Erdoğan to address the nation and breathed a sigh of relief after his address and his firm stand against the coup, eventually pouring onto the streets. Among those taking to the streets were people from every walk of life and political bent. As everyone would agree, it is crucial for a country like Turkey to have a strong government free from the fetters of coalitions.

Indeed, what led Nationalist Movement Party (MHP) Chairman Devlet Bahçeli to announce that they would support a referendum on a constitutional amendment that included a shift to a presidential system was what happened on July 15 and afterward. The logic here is simple and legitimate. If there are problems in Turkey's system of government today that should be eliminated, and if these problems create grave weaknesses in the current atmosphere of the Middle East, it's best to take the issue to the people to find a solution somehow. Everyone would present their argument and the people would make the final decision. Thus, a serious problem would be resolved.

In a democratic state, the people are the source of legitimacy. For a pluralistic structure to be reflected in state administration, a genuine separation of powers should be established. Some argue that Erdoğan wants the presidential system for himself. This argument becomes void, however, when we examine the current political realities in Turkey. Erdoğan's party received 50 percent of the vote in the Nov. 1, 2015, elections. Support for the AK Party stands at around 55 percent currently. And it works in harmony with Erdoğan. On the other hand, support for Erdoğan stands at 60 percent. Meanwhile, 78 percent of citizens approve of the way Erdoğan is handling his duties. The president has extensive powers under the present Constitution. Besides, the president is not accountable for his actions.

In sum, it is said that we are faced with a system that suits an authoritarian leader and even a wannabe dictator down to the ground, enhancing the powers of one-man, while rendering Parliament only a puppet. This argument is totally false. On the contrary, we want a system that has effective checks and balances, that establishes a clear separation between the legislative and executive branches, that avoids coalitions, that is impervious to vanguard movements and that maximizes people's power while providing a wider space for elected politicians.

Of course, it's the people, ultimately, who have the final say. I believe that people having the final word will bring serious relief. In any case, democracy will win.

Share on Facebook Share on Twitter
Previous in Op-Ed Alliance between Turkey, Saudi Arabia and Pakistan can gradually reduce... Next in Op-Ed Coalition's fight against Daesh terror in Mosul has revived an old...
DAILY SABAH RECOMMENDS