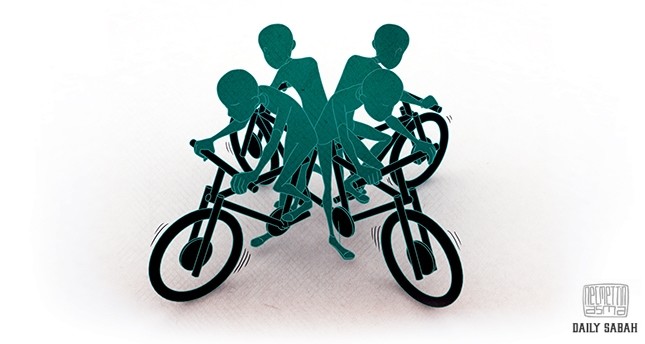 Turkey can keep the patched politics and find short-term solutions or it will turn its political experience to the bigger picture, which is the presidential system

The Constitution, which is the embodiment of the political system and is seen as a result of the social contract, is the political road map of the community. In modern societies, you can understand easily what people understand from politics and how it is applied in real life through looking at the Constitution. In Turkish politics, the experience of the Constitution has come about as a result of its modernization process. However, this experience accommodates an inherent conflict in itself.

The coup tradition that accompanies our constitutional experience means that the Constitution is not a legal text created by the will of the society. This tradition has turned the Constitution into the political idea of the military. Therefore, when the parliamentary tradition, which is defended in a conservative manner, is examined, it is able to provide a very undemocratic result. Here is the short summary of the Turkish constitution's evolution:

The Constitution of 1921 (reviewed by the first Parliament before the establishment of the Republic) stands in a privileged place with its democratic pluralism and the absolute legislative supremacy of its powers. It gave way to the Constitution of 1924 during the initial phase of the single-party period.

In contrast, constitutional changes that have come into existence from the second Constitutional period to the present day are quite far from the democratic construction format. The changes of the Constitution of 1909, which gave parliamentary property to Kanun-i Esasi (the first Ottoman Constitution), were realized as a result of the military coup in 1908.

The Constitution of 1924, within the unity of power, condemned Turkish politics to an authoritarian system and has prevented the existence of democracy because of majoritarian politics in spite of the transition to a multiparty system after 1946.

The Constitution of 1961 was legislated as a result of the military junta on May 27, but it was restricted by the Memorandum of 1971 because it was deemed to be too libertarian.

Although it has changed many times, the current Constitution of 1982 was prepared by the military after the military coup on Sept. 12, 1980. In summary, from another point of view, it can be concluded that our constitutional tradition, which is a reflection of a democratic political society, is the history of coups.

PATCHED POLITICS IN TURKEYThe impact of the military coup on Sept. 12 has not yet passed in Turkish politics. In order to overcome this trauma, tens of laws and the article of the Constitution have been amended but the need could not be fulfilled because of the absence of a holistic system change. The ruling Justice and Development Party (AK Party) has significantly contributed to the process of this renovation via European Union negotiations and the quest for democratization. On the other hand, in order to regulate the "civil Constitution," the parties represented in Parliament have discussed this for a long time. However, this initiative could not have created a tangible outcome. Despite it all, it needs to be emphasized that the changes that were made in the name of keeping the democratic system alive have made the system more fragile. The most important factor that caused this failure was the president's being elected by the people, the Constitutional Amendment in 2007. The former AK Party chairman and ex-Prime Minister Ahmet Davutoğlu, who received the most votes in the history of the AK Party (49.4 percent), and President Recep Tayyip Erdoğan, who received 52 percent of the vote, faced a crisis. This crisis is the counterpart of the problem of "double legitimacy" in Turkish politics. In order to overcome this situation, the president should be elected by the assembly by maintaining a symbolic state in accordance with the parliamentary system or by switching to a presidential system where executive authority is in the hands of the president in a real sense. Otherwise, two actors who have the same political opinion may experience this crisis. However, reducing the change to just the executive authority is only a solution for the visible face of the problem. The Constitution should be replaced fully and it should be supported by political parties and electoral law. Changing the political system on a piecemeal basis makes the system vulnerable to crises and weak against problems.

THE RETURN OF THE PRESIDENTIAL SYSTEMAlthough the presidential system is not situated in the political field as concrete proposals, it takes first place in the agenda of nationalist and conservative politics that are important traditions in Turkish politics. This traditionalist politicians' desire to consolidate the system through charismatic leaders has played a dominant role in this situation. Theoretically elected democratic leaders play a unifying role in politically divided societies. Therefore, this makes the presidential system a facilitating factor for Turkey. The most important criticism of this subject is that elected leaders will see themselves as a savior. The term of the leader is an important political issue not only for the presidency but also for parliamentary regimes. Despite the existence of Turkish politics in the parliamentary regime, Turkey has been leading through the leaders of the parties who are public figures for a long time. The important point here is the leader's duties, authority and responsibility. After these issues have been determined, the elected leader remaining within the limits can be a unifying figure not an authoritarian one. The most important example of the figure of the inclusivist leader is that the President could not be selected for a long time before Sept. 12. In the popular presidential elections, done for the first time in 2014, Ekmeleddin İhsanoğlu was a joint leader for the opposition parties of the Republican People's Party (CHP) and the Nationalist Movement Party (MHP). It is important for the development of the country's political culture. Public figures can be nominated by various political parties by the alliance and it is not seen as a crisis in modern Turkey.

The most important criticism related to countries that are ruled by a presidential regime is that military intervention is more common in moments of political crisis. The "protecting the country" reflex of the military has always been present in Turkey regardless of the form of government and these initiatives have been realized in the parliamentary regime. The July 15 coup attempt is the last and most unsuccessful example of this tradition. Here, the progress of political culture and the response of society and political parties have played an important role.Democratic politics in Turkey have substantially changed between the 1990s and today and important steps have been taken in the field of finance and the ethics of politics.

Despite the termination of the Kemalist guardianship in the process of democratization, the Gülenist Terror Group (FETÖ) who infiltrated state institutions, have caused dysfunction in the judicial mechanism.

If you ask me what we'll be seeing in Turkish politics with the presidential system in future, a dualist politics similar to American politics can appear; on the one side, the conservative politics that has exceeded a 50 percent voting share, on the other side, social democratic politics that include the different elements of the left. Political stability increased in 2002, after the AK Party's coming to power alone. Today, Turkish politics should make a selection between a stable and corporate structure and politics which is patched and vulnerable to the political crisis. Turkey can keep the patched politics and find short-term solutions or it will turn into its political experience to the bigger picture, which is the presidential system.