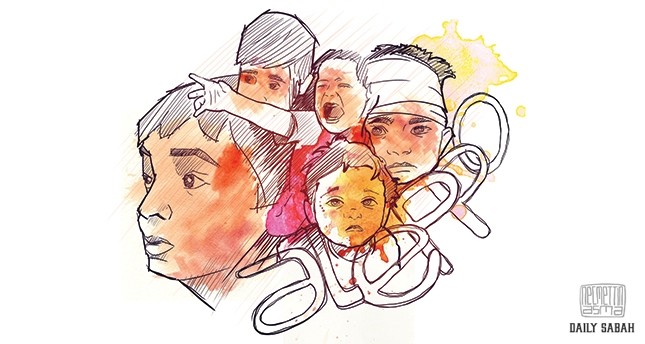 Syrian armed forces supported by Russian air force are adamant on leveling Aleppo to the ground since July 2016; when Syrian armed forces encircled eastern Aleppo. Once associated with Syria's commercial and manufacturing center; Aleppo currently is best known for being the venue of a humanitarian catastrophe where Russian war planes are targeting over heavily populated areas of the city in a regular manner. Eastern Aleppo home to 250.000 people is symbolizing one of the cruelest faces of longstanding war in Syria whereas Russian warplanes are pounding opposition-held areas of divided city. Based on recent heavily attacks of regime forces; the lives of thousands of civilians have significantly impaired and they are forced to live in the misery of insufficient basic food, medicine and fuel supplies which impede delivery of health services.

Aleppo is a significant key in Syria war swiftly evolving into a game changer after Syrian regime forces gained control of key Aleppo areas since losing area to the rebels three years ago. Reportedly, the regime has gained significant ground since 28 November, 2016 and now covering up almost %80 of ex-rebel held area in East Aleppo where rebels found fertile ground to grow up. When all the eyes are glued to developments in Mosul operation; serious war crimes committed by regime forces concertedly Russia and Iran ground forces has once more changed the focal territorial concentration of spreading war in the eyes of international community. Reportedly, civilians residing in East Aleppo has trapped under heavy bombardment having no access to basic food and medicine. Under heavy circumstances; civilians are trying to reach safely from eastern to western neighborhoods of Aleppo which caused to mount up the numbers of internally displaced people.

Aleppo reflects not only the urgent priority to save thousands of civilians' lives but also to be out of the woods for Assad regime. To put it more clearly, Aleppo is a key anchor point in Syria war for several reasons from the point of various stakeholders taking up positions. First of all; Aleppo is highly significant location for regime forces while they have no intention to yield the floor to numerous rebel forces associated with al-Qaida and other illegal armed groups. Since the struggle in war area has intensified; regime is objecting to shield illegal sub-state actors in Aleppo. As a matter of fact; when the cessation of hostilities were declared on February 27, 2016; Aleppo was exempted to mute the voices of rebel forces reverberating through one of the most strategic cities of the war. The strategic step even suspended the Geneva Peace Talks to stiffen defenses of Syrian regime forces. In a broad sense; gaining control over Aleppo by the regime forces is a golden shot due to the fact that neither sides was able to break the chain where most of the territory were contentious and owners of battlefronts are shifting routinely since mid-2016. Currently, Assad has holding a critical foothold and is so close to encircle the city and expel all the rebel forces under Russian air power. Second of all, Aleppo is highly critical location where expansionist geopolitical ambitions of Russia cleared out of dust and came to the light. Nonetheless; from the very beginning of the Syria war; Russia is appealing to denialist rhetoric for its interventions reaching up war crimes and covert aims breeds in Eastern Mediterranean. For instance, when Russia placed its cards on the table in Syria war in 2012; Putin emphasized his reluctance over the fate of Assad's regime. Nevertheless; four years later after his statement, two countries are escalated their military cooperation on the war in Syria and Russia is strongly watching out Syrian President Bashar Assad. When Aleppo has turned into a key battleground in July, 2012 Putin's entry into the Syrian war is primarily about shoring up Assad's regime and not fighting DAESH.

As a matter of fact, strategic vagueness of Russia has also paved the way for crystallization of disputes with Turkey and relationship deteriorated dramatically when different strategic agendas came to surface and caused large estrangement between two countries. In a way; both countries are failed to embrace striking paradigm shift of their political agenda bilaterally. To put it more bluntly; Russia has rejuvenated its aggressive stance in the Middle East and turned back to the battleground to expand its military base since its withdrawal from Afghanistan in 1989. Turkey's first major incursion into Syria called 'Operation Euphrates Shield' has opened a new page for constantly shifting regional dynamics in Middle East. Syria war caused to redeal the player's hand of cards and ex-active actors has turned back to the region stronger than before. Thirdly, situation of Aleppo has become more of an issue of Turkey because Aleppo is a success guarantor of Turkey's first military intervention [known as Operation Euphrates Shield] to be launched in order to stop the advancement of PYD forces in northern Syria jeopardizes Turkey's border security. Presidential spokesperson İbrahim Kalın stated "Turkey is targeting to clear al-Bab from DAESH terrorists and form a free zone of 5.000 square meters compromising towns of al-Bab, al-Rai, Azaz, Jarablus and Manbij". On the eve of the Al-Bab Operation; some important points has been raised up by pundits: The most prominent one is whether regime forces are able to regain the control of all enclaves that has been in rebel hands since 2012; how will shape course of the next stage for Operation Euphrates Shield while Turkey aims to occupy al-Bab? Besides, it is obvious that the Syrian regime is against FSA rebels taking over that city, fearing that they could use it as a base to flourish a fledgling anti-regime opposition. Another issue is if Turkey backed FSA forces are precluded to enter al-Bab; who will mount the operation to fight with an estimated number of 300 DAESH militants currently occupying the city. These are recent debates about the course of Aleppo operation and so far there is no concrete answer for the questions. Another issue that has been put forward by Régis Le Sommier; war reporter and deputy director of French weekly. According to his claim; mobilization of Syrian Free Syrian Army constituents by providing air, artillery and troop support; Turkey played into Assad's hands to help debilitate the rebel forces so that Assad are able to advance through Aleppo expeditiously. However; his claim is a rather contentious issue due to the fact that advancement of regime forces primarily based on two significant gains prior to Turkey's operation; one of them is recapturing of Nubul and Zahraa villages in February 2016 located in north-west Aleppo. Those villages are on the way of the main supply route from Turkey into rebel-held East. Other significant gain has shifted the course of the war in Aleppo is the fall of Castello Road in July, 2016 which is considered the only route of rebel bastions in Eastern Aleppo and only means of facilitating the floods of food, medicine and other vital supplies into Aleppo's besieged neighborhoods. So it is hard to claim that Turkey's operation has halted the rebel advancement in Aleppo.

Ambiguous situation in Aleppo with recent gains of regime forces aroused a sudden attention of international community from Mosul operation. For the first time; strong criticism has raised up synchronously against Russia's brutal assaults on the populated areas of Aleppo by several Western governments; United Nations and civil society organizations such as Amnesty International which aims at scrutinizing human rights violations all over the world. In addition; Aleppo has been hit by suspected chlorine attack several times; caused to kill hundreds of local residents of Aleppo including women and children since 2012 which would amount to a war crime. Yesterday; Syrian regime has announced to halt its attacks on Aleppo to let the evacuation of civilians; however; the announcement is a highly controversial while comparing to the previous ones of Russia. Based on previous experiences; when Russia declared a temporary pause in the air strikes; civilians were not able to escape due to the fact that they were lack of any means to travel inside Aleppo, so very few of them took the offer and managed to fled their homes. Even they announced its suspension of airstrikes beforehand; it has been reported that Russia continued to hit some neighborhoods incessantly. So the current decision to suspend its advance to allow some 8,000 civilians to leave the city should be scrutinized studiously by the international community.

The ambiguity that Russia nourishes in Middle East has created a risk society and caused to preliminary fracture of Syria. Although Putin's oscillating policy towards Syria marked the beginning of deterioration of Turkish-Russian relations; the policy also spurred Turkey to expedite ratifying its foreign policy and invigorated its interest concerning Middle East; once gained a paramount position in Özal's term in the office. Since Özal passed away; Turkey's interest towards Middle East has swiftly dwindled away and suspended. While AKP government came to the power; Turkey's foreign policy vision has been ratified and revived whereas earlier periods Turkey was wary of any direct and indirect intervention of Middle East politics. Currently, compatible with abruptly changing feature of Middle East politics shaped by Russia's interventionist appetence; Turkey is giving weight to Middle East region under a newly designed pro-active and multi-lateral role. Now, the relationship between Russia and Turkey are under construction and both countries are striving to mend the fences by a motivation focusing on boosting trade and energy projects. Within the framework; Turkey's prime minister Binali Yıldrım paid a visit to Russia to discuss over the issues such as lifting the embargo on exporting Turkish agricultural products; removing visa requirements and reviving trade between two countries. However, even though rapprochement policy between two countries is making large progress after serious breaking down of relationship; Turkey's presidential spokesman İbrahim Kalın feels free to criticize Russia to carry out crimes against human rights and catches international community's attraction once more against war crimes implemented by Russia in Aleppo operation. It seems that the course of diplomatic relationships between two countries will be determined by the situation in Aleppo to a large extent. Specifically, when contents and stages of probable operation in al-Bab by Turkey backed FSA forces are clarified; the relationship between two countries gets back on the rails and gains a stable feature in the medium term.