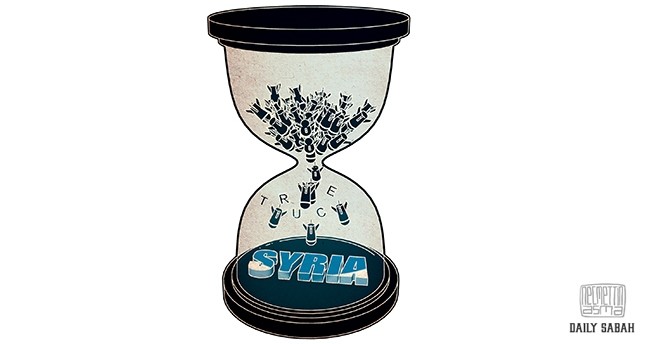 There are still a number of hurdles toward getting any move forward with Russia-backed peace talks. The priority has shifted though from the moderate opposition forces, who insist that if Assad's fighters cannot respect the cease-fire, then they will not even attend, which would scupper any hopes of success in Geneva later in February

It is looking increasingly unlikely that Russia's own peace initiative in Syria – which crucially places Iran and Turkey as key players – is going to amount to much, given that the opposition is unlikely to be part of talks. Peace talks, by definition, cannot succeed unless all the main players attend them, as many analysts argued the same point in 2014 when Iran was invited by the U.N. to attend its own Geneva talks, only to be uninvited days later. Russia's recent bold move to be a broker of an alternative forum, which excludes the U.S. – genius for so many reasons but mainly that they have mixed and confused objectives in Syria – was smart and welcome, if for no other reason that it placed importance on the two most significant non-Syrian entities in the war, i.e. those countries that had invested the most in the war and stood to win or lose the most, even though those two countries had reasonable relations with each other, but were proxy enemies in the war itself: Iran and Turkey.

Both Iran and Turkey can be the vanguard of peace and make a deal work, but both need to make sure that a cease-fire holds, which is really the crux of the problem now as opposition groups are complaining that Assad regime allies are not keeping to it – and thus have given the oppositions a reason to boycott it.

Turkey's relationship with Russia is a real test tube experiment and is being put to the test. Abandoned by the West, Ankara sees Russia as a future ally, both geopolitically and financially and perhaps even militarily if the U.S. let Turkey down over a much-needed extradition of the Gülenist Terror Group's (FETÖ) leader Fetullah Gülen. For the moment, there is much hope for this relationship to galvanize itself further but President Recep Tayyip Erdoğan's administration will expect Russia to act now and convince Bashar Assad's government that they need to take total responsibility for all of their allies fighting on the ground and to ensure an absolute cease-fire is kept. The Russia talks penciled in for Kazakhstan could set an extraordinary precedent in that they could present the U.N. with a blueprint for its own Geneva Peace talks to be held in February which have already received a positive spin from both John Kerry and the Syria's Assad.

Both men are able to see a different dynamic to the U.N. talks, in that there is a great many changes which are notable to previous ones. The presence of both Iran and Turkey would be important, but also a number of other factors are giving a feel-good spin to the agenda; the fact that the rebels are now in a negotiating position of weakness (rather than strength, like in 2014), they feel, will make the possibility of a tangible outcome more realistic. The rhetoric, although repeating itself still on the removal of Assad, is less about regime change and more about being able to trust the Assad coalition (Russia, Hezbollah and Iran). If it cannot be trusted to keep its word on a cease-fire, then how can it be trusted to keep its word on anything else?

Russia understands this and made a bold move this week to remove its armada of ships and a lot of its military on land in Syria as a well-timed gesture to calm the madding crowd. But the aging aircraft carrier's presence in Syrian waters was largely a PR stunt when it arrived just a few weeks ago; in reality the ship is plagued with technical gremlins and only has 15 fighter jets on board (some of which had problems landing on it) and so did not contribute so much to the war effort as many expected. But at least Russia sees the need for important gestures.

The problem with the peace talks now – both the Russia inspired one and the U.N. one which will follow – is that there is little incentive from either side to take them seriously though, especially not from the Assad regime. If Turkey is going to be playing a major role in them, Ankara needs to understand that it needs to stretch its diplomatic resources to the limit both with Russia and Iran – but also with its own "oppositions" which it backs.Recently, with the fall of Aleppo, Turkey complained that the way it was carried out was not what Ankara had previously agreed with Moscow when President Erdoğan visited St. Petersburg earlier in 2016 to patch up the relationship with Putin. Turkey is also worried about the Kurdish terrorists crafting their own state out of a huge swathe of northern Syria and so to take a leading role now would be crucial to Turkey's peace, as it wrestles with a post-coup chaos and terrorist threat on its own soil as a direct result of Kurdish terrorist strength increasing and the oppositions in Syria now on their back foot. Recently a former U.S. ambassador to Syria stated plainly that Assad has won the war now in Syria and the sooner the moderate opposition forces – as well as their sponsors – accept it the better. The crucial role now for Turkey is to convince them that they have not lost everything though as this will only induce a "fight to the end" reaction, which means a gorilla war will evolve – thus more car bombing and other such terror attacks in both Turkey and Lebanon can be expected. If the opposition forces are not backed into a corner and they can accept that holding out for regime change is no longer viable as a negotiating tool and that they can be reintegrated into a new political apparatus in Syria, there is a chance there to be taken, which Turkey can profit from perhaps even more than Iran, as part of that deal, woven into the text, will no doubt be guarantees that the Kurdish terrorists must not have their state.

There are a lot of hurdles ahead and another great one is getting the Assad regime and its regional allies taking the talks seriously in the first place as many would argue that there is even less and less for them to garner from negotiations when they are taking more on the battlefield anyway. Recently Hezbollah's chief Hassan Nasrallah said in a speech that after the battle of Aleppo, that still there was much to do in the war in Syria as it was still not over. But then he added quite firmly that the fall of the city to the Assad forces marked a milestone in the war in that the West and the opposition fighters should now forget about regime change in Syria.

Perhaps this speech did not help the peace process and would be seen as gloating over the opposition forces' defeat. Or perhaps Nasrallah knows the Iranian position on Syria and the respective peace talks already which is that Assad will most certainly not offer any great concessions that he may have offered in previous talks. What is essential now is for the U.N. and EU to step in and outline the humanitarian and restructuring program which could help the rebels swallow the bitter pill of defeat and accept a lucid reality that Iran is expanding its Shiite ideology in the region in Iraq, Syria, Yemen and of course Lebanon. For the West, the Gulf Arab countries which backed the opposition fighters and of course Turkey, a peace in Syria only for the moment looks like a prize only Turkey will benefit enormously from. But Ankara has time to convince both Saudi Arabia and Iran that they are all being held back from trade and economic development by funneling money into the black hole of opposition fighters, whose obsession of removing Assad is no longer relevant.