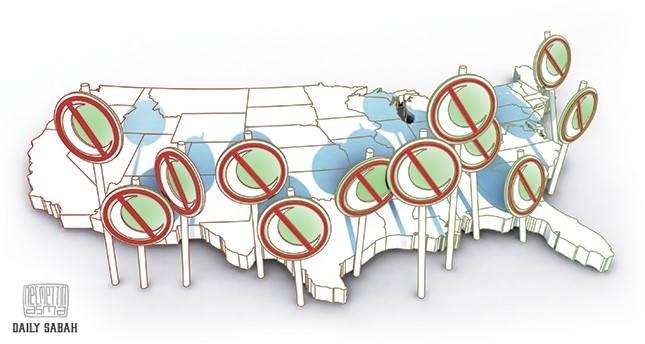 After Trump's discriminative policies, the U.S.'s motto of ‘being a country that unites everyone coming from different cultural, traditional and religious backgrounds,' has become merely a distant memory in the past

Having vowed to declare comprehensive immigration reform, U.S. President Donald Trump has laid out his first policy paper, temporarily barring travelers from Syria and six other Muslim-majority countries based on two rather unwarranted justifications of "protecting America from terrorism" and "retaliating against the alleged act of execution of Christians in the Middle East." The U.S. immigration policy reform is one of the hottest political debates in decades and is a key determinant for the fates of the estimated 11 million unauthorized immigrants residing in the country. Trump has pledged to focus primarily on domestic politics in his first term and to deliver on his promises. His first executive order was about an immigration-related issue, which has ended up having a rather substantial effect on hundreds of thousands of people from banned countries already living in the U.S. under a green card or employee visa or temporary student visa.

Why did Trump's hardline discourse during the election campaign not have a negative effect on his potential constituents? Trump gave initial signals of applying border fortifications and the erection of walls to divert the U.S.-targeted immigration flow appealing to an idiosyncratic discourse full of anger and hatred for asylum-seeker-producer countries located in the Middle East region. He was carrying a big stick but he was not walking softly. He submitted his bid in a discriminatory way against immigrants, minority groups and women and most probably took advantage of the state of constant anxiety embedded in American society derived from growing socio-economic inequalities, the poverty trap and security risks. He basically took advantage of the whole process of a society-based pendulum where fermentation of a newly evolving society is characterized by risks that hinder the prediction of even the short-term future. German sociologist Ulric Beck called this specific society type "society of risks," therefore, Trump's politics should be analyzed with the notion of "liquid fear" created by the Polish sociologist Zygmunt Bauman who frames the upsurge across the globe as symptomatic of the pervasion of fear in societies of risks.

As soon as Trump's immigration curbs came into effect, a global reaction emerged and an unprecedented global backlash occurred as thousands of people swarmed to the streets and chanted anti-Trump slogans. Trump was also harshly criticized by the leaders of European countries and the Arab League – whose members are staunch American allies such as Saudi Arabia, Egypt and Jordan – in the eyes of the international community. Nevertheless, Trump's executive order on Friday took effect immediately, running against travelers with passports from the seven banned countries and dragging America's immigration system into deadlock. As various news agencies stated the critical number of people at airports where Middle Eastern passengers were barred from entering the U.S. and redirected the flights headed for their home countries despite holding valid visas. The most outstanding news regarding the executive order was about a Yazidi refugee woman who meant to meet her husband in the U.S. but was sent back to Iraq by flight crew last week despite being fully vetted.

The point is Yazidis have been massacred by Daesh terrorists, their villages destroyed, faced starvation and dehydration and women have been enslaved in northern Iraq since 2014. The dramatic situation of the Yazidi community living in Iraq makes them one of the most significant persons of concern among Iraqi asylum-seekers with a well-founded fear of persecution as the victims of Daesh slaughter. The Yazidi community is trapped in the middle, Trump stopped them from seeking asylum in the U.S. just because they are members of a pre-Islamic religion. On the other hand, they are targeted by Daesh in its campaign to cleanse Iraq and its neighboring countries of esoteric communities whose doctrines do not fit into its Islamic beliefs and practices.

Establishing new vetting measures in asylum law to eradicate the radical terrorist organizations in the U.S. also brings Trump's newly declared executive order into question in terms of the most fundamental human rights violations called the "non-refoulement principle," which prevents people from being forcibly returned to territories where they could be exposed to persecution. The law has become the corner stone of international refugee law.

Therefore, Trump's executive order is both against international refugee law and human rights in the first place and it is discriminating against people who are seeking asylum within the legal framework. Consequently, the failure to respect the rights of people seeking asylum is a breach of the U.S.'s international obligations as a failure to respect the rights of nationals.

The most significant point that should be underlined is Trump's baseless archaic explanations. It is as if he is eager to launch a crusade against Islam and he is appealing to the ratification of lingering immigration reform as an excuse. Vigorously advocating remnants of the crusades, Trump says major changes are underway in the U.S. political system, which he previously claimed was broken. His executive order suspending immigration from seven predominantly Muslim countries is one of the major indicators of the deconstruction of the "broken domestic politics."

As Bauman argued, the state of constant obscurity causes notable fear throughout all levels of society and entails the deconstruction of society's intrinsic structure by means of politics. As the international refugee pundits put forward, Trump's newly declared executive order is a manifesto of betrayal of the fundamental American values of embracing people fleeing persecution. To put it more explicitly, abandoning refugees to their fate is a deconstruction of American societal values. As Bauman added, there is no solid structure around us that people can rely on and invest their hopes in. The state of continuous uncertainty triggers new circumstances and entails a swift accommodation of current structures to the new circumstances.

Trump made strong commitments to not allowing the dismantling of the network of security that was particularly felt by people lower down in the social hierarchy, the middle class, which is swelling in size, and people living in poverty or at risk of falling into poverty. Under those circumstances, as Bauman laid out, living in a society of risks entails a strong man and a strong power that is not constrained by political correctness and can take responsibility of the people's future and eliminate the potential risks in their lives, therefore Trump appeals to his constituents, albeit with discriminatory discourse.

BEING MUSLIM LEADS TO TWOFOLD VICTIMIZATION

Reportedly, a U.S. federal judge issued an emergency order to halt Trump's immigration ban, however there are still some uncertainties about the future resettlement number of asylum seekers in the U.S. who are displaced by war, political and religious oppression, being member of a particular social or political group and natural disasters. By stoking racial and religious hatred, Trump's discriminative policies will shred the fabric of American society in the long run. Trump is fueling the state of constant uncertainty that affects all levels of society and underlies the political economy and overall dynamics of a country.

The most disadvantaged people in the newly marbling dynamics of the American political system are people forcibly uprooted by various conflicts and persecution in the Middle East region, so the victimization of these people is doubled simply because their religious identity is rather unjust in both the domestic and international politics of the U.S. as an asylum receiving country. It seems that Trump will ramp up tensions and plunge his country into deeper chaos if he fails to call for an embrace of the Muslim community.