Turkey and the Gulf States: Sustainable cooperation is needed 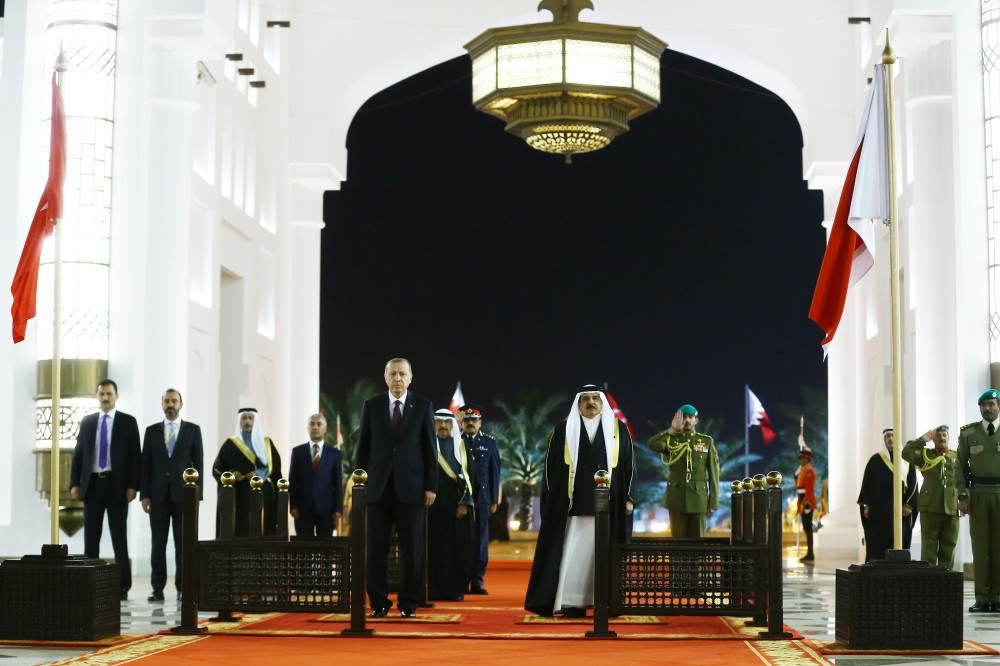 President Recep Tayyip Erdou011fan, who visited Bahrain on Monday as part of his official visit to the Gulf states, is welcomed by Bahrain's King Hamad bin Isa Al Khalifa at the official ceremony.
by Muhittin Ataman Feb 15, 2017 12:00 am

To make the region stronger and politically more powerful, Turkey and the Gulf states should shoulder the responsibility and start taking steps to develop a close mutual cooperation

The Gulf States have been facing substantial challenges since the beginning of the Arab revolutions and insurgencies. These challenges are also directed at the Sykes-Picot Agreement, the symbol of artificial borders drawn by the colonial powers. For much of the second half of the 20th century, many leaders feared that any secession in a regional country would have a domino effect across the region. The increase in the number and influence of non-state actors such as ethnic, sectarian and religious movements and organizations throughout the Middle East and North Africa are indications of popular discomfort with the traditional regional system.

The Arab revolutions are blamed for the disintegration of post-colonial states such as Iraq, Yemen, Libya and Syria. Almost all regional states with artificial borders fear that the new wave of change may open their territorial integrity and political independence to discussion. Syria, Iraq, Egypt, Libya and Yemen have fallen apart not because they are artificial constructs created by colonial powers but because they were ruled by autocratic governments that were exclusionist, personalistic and totalitarian regimes. That is to say, significant segments of the population, often defined in religious or ethnic terms, had no real stake in society and the state.

Even though, the main problem with state authorities is about whether they are native or alien to the traditional regional structure and cultural values, the Gulf States face substantial threats from regional states and from non-state actors. Violent non-state actors represent an existential threat to the conservative regimes, and particularly to Saudi Arabia's ruling al-Saud family. For instance, until very recently Saudi Arabia had been successful in mobilizing national governments and non-state actors as instruments of its soft power strategy. However, with the pace of the Arab insurgencies, Riyadh cannot continue its traditional policy of utilizing petro-dollars to mobilize resources. Therefore, the Gulf States have to play the real realpolitik game, establish regional alliances and balance all the regional threats.

In this context, they need a country like Turkey to overcome regional threats and control developments. Turkey and the Gulf States are the few islands of political and economic stability left in the Middle East. In the wake of the Arab revolutions, Turkey and the Gulf States tried to control the pace of the regional changes. While Turkey supported popular movements, actors that have the highest potential to contribute to the normalization of the region, the Gulf States responded in a reactive manner. Their policies differed and in some cases conflicted in 2013 and 2014. For instance, the two sides supported conflicting sides in Egypt during the military coup. While Turkey supported the elected government of Muhammad Morsi, the Gulf States, with the exception of Qatar, supported the coup-maker el-Sissi.

With the administrative change in Saudi Arabia at the beginning of 2015, bilateral relations between the two countries began to normalize; then Bahrain and Kuwait followed the new Saudi King Salman to normalize their relations with Turkey. Oman was already consistent in terms of following a mediatory and peaceful role in the region. However, the United Arab Emirates (UAE) continued to follow an anti-Turkish policy throughout the region, and even mobilized its financial resources to extend its anti-Turkish attitude at the global scale.

Even though, there are still some problems between Turkey and the Gulf States – resulting mainly from the Gulf dependence on Western global powers and the mistrust toward Turkey for the latter's support for popular movements in the Arab world – the two sides are dependent on one another to secure their national security and territorial integrity. Potential problems and political differences between the Gulf and Turkey should not prevent their mutual rapprochement. For the last several years, the priorities of every country in the region have changed according to developments on the ground. Turkey has also altered its regional priorities from supporting revisionist movements in the region into protecting regional political, economic and social stability. For several reasons – some of them mentioned below – there is an urgent need for the Gulf and Turkey to develop sustainable cooperation.

First of all, Turkey and the Gulf need to invest in the security sector and to improve their military cooperation. As the only stable regional countries, besides Iran and Israel, they must secure their national security and neutralize regional threats. There is a need for cooperation against Iran's regional expansionist policies and its destabilizing effect on both the Gulf States and Turkey. The Gulf States are encircled by Iranian expansionism in Iraq, Syria, Lebanon and Yemen as Iran increases its leverage over the Shiite minorities in the Gulf States. While cooperating against Iran and trying to normalize it, the Gulf and Turkey need to work together to prevent Iran from deepening sectarian conflicts in the Muslim world. They must refrain from forming another sectarian pole in the region and Turkey should encourage the Gulf to pursue a sectarian policy, which is a zero-sum game. Otherwise, in the case of a regional war based on differences in belief systems, every country will lose.

Second, the two sides need to improve their economic relationship in order to diversify their economic partners and to decrease their dependence on the global powers, especially the Western ones. The two sides have complementary economic structures and therefore have the potential to increase their mutual trade volume. While the Gulf States' economy is dependent on the export of oil and natural gas, Turkey's economy is dependent on importing these natural resources. On the other hand, while the Gulf is a net exporter mostly of manufactured goods, Turkey is an increasing economic power whose economy is dependent on export-led growth. As an indication of the interdependence between the Gulf and Turkey, Turkey and Bahrain have signed four agreements in the fields of diplomacy, economy, energy and defense during President Recep Tayyip Erdoğan's visit.

Lastly, Turkey and the Gulf States should take initiatives in managing, defusing and if possible solving regional conflicts. Thus, they may prevent global powers from taking the lead and exploiting the regional circumstances against regional powers. President Erdoğan's visit to Bahrain, Saudi Arabia and Qatar is intended to improve the multidimensional relationship and create a regional network of initiatives for dialogue. Turkey attaches great importance to sustainable cooperation with the Gulf. This latest visit to three Gulf countries is another step taken by Turkey toward establishing a lasting cooperation with the Gulf.