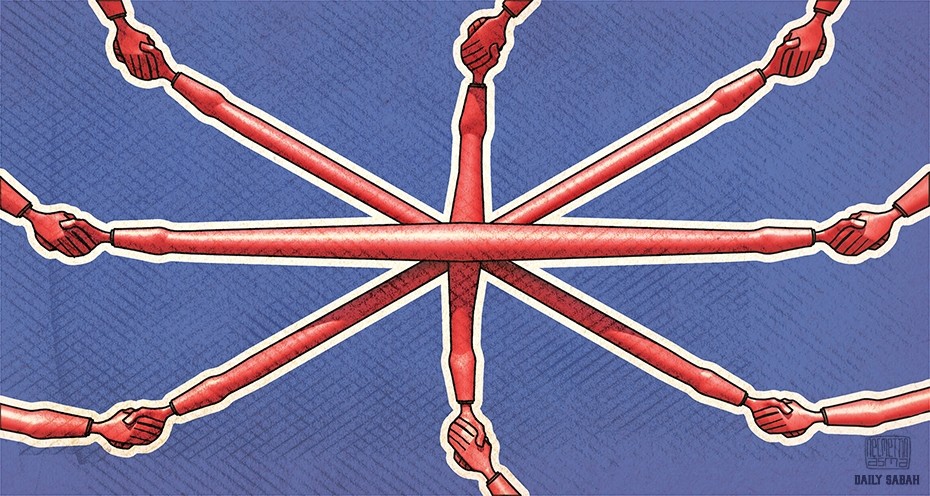 I am writing this review about the U.K. Parliament's report released on Turkey on a rented college computer because I could not bring myself to check my laptop on my way to Britain. Just like the obliging porters' readiness to find a solution to my laptop-less state, the Parliament report prepared by the committee chaired by Crispin Blunt — nobody does surnames, or Christian names for that matter, like the Foreign and Common Wealth Office (FCO) — is an exercise in text-book British diplomacy. It reveals the conditions of its production and is aware of itself as such, comparing British sophistication — and possibly sophistry — with continental Europe's much clumsier approach to Turkey. "We empathize before we criticize," the report says and as anyone who has been exposed to British English for any period of time knows that it is a language of big "buts."

The report starts by condemning the PKK attacks and the coup attempt, and highlights cooperation in trade, defense and security. The fact that Turkey is hosting more Syrian refugees than any other country is mentioned several times in the report, and the U.K. government has been encouraged to pressure the EU to keep its end of the bargain and provide more aid. As with this suggestion, there is an underlying sense in the report that the U.K.'s influence in Europe is waning, and that the country would do well not to alienate markets such as Turkey, to which they may have to turn when Brexit is complete. The report also chides the foreign office for not being able to tell, definitively, whether or not Gülenists were behind the coup attempt. "FCO strikes us as knowing too little for itself about either the Gülenists or their role in the coup attempt," the report says. Their Gülenist sources for the report are Dr. Yüksel Alp Aslandoğan, the executive director of the Alliance for Shared Values, and Mr Özcan Keleş, chairman of the Dialogue Society. Perhaps it is time to send out a Lawrence of Gülenists, maybe. Elsewhere, the report declares that, "The inadequate funding provided to the FCO has led to a worrying weakening of its independent analytical capacity," giving us a glimpse of how austerity effects the intelligence services. As such, the report is just as much about the condition of the British state as it is about the Turkish one.

British politician's tendency to talk about "values" is evident in the report, and it turns out the foreign office and the British embassy in Ankara cannot agree on whether or not "we" and the Turks share common values. While those who are actually in Ankara and in close contact with the Turkish people — like Richard Moore whose Twitter sessions with ordinary Turks have won over hearts and minds — and the government speak of "shared values," the report advises the FCO to favor the term "shared interests" or risk losing its own reputation as a patron of liberties and freedoms worldwide. We are well aware of how many troops, aircraft and munitions the U.K. has devoted for that purpose in the past decades. The arms industry, in fact, gets its own section in the report. The committee seems anxious that the U.K. should be able to continue to sell weapons to Turkey, but that it should also have a say on how they use them. Anyone who watches the news from Yemen — if you're lucky enough to find reporters/TV channels reporting it — know how thorough the U.K. is in knowing where and how their weapons are used.

In the section on democratic rights, the report reverts to Guardian-speak and defines Turkey several times as "once held up as an example to the region," hardly conceding that it became that model under the Justice and Development Party (AK Party) rule. It then goes into Elif Shafak mode and talks about how "deeply divided" the country is and that it has "profound social and cultural divisions." It also says that Turkey has to decide whether it will be a "repressive or recovering" state — which made me chuckle at the subconscious, or perhaps conscious, perception of Turkey lying in its deathbed.

The report says the U.K. must in no way take a side on the referendum. There is no direct reference to continental Europe banning "yes" meetings while giving the "no" demonstrations free reign, however it is clear that the committee is advising the British government to stay away from such activity to preserve the understanding that U.K. is somewhat more sympathetic to Turkey's interests compared to Europe. This is something the man and woman on the street in Turkey is well aware of. They are equally aware of the fact that the U.K.'s pro-Turkey position is meant to anger the EU, which it has chosen to abandon anyway. So with no EU family members to tease and goad, will the U.K. still "sympathize" before it "criticizes"? The report seems to suggest so. "I am pleased to say that they appreciate it and we appreciate their appreciation," says Alan Duncan, again, in a rhetoric that Turks of a certain age who watched "Yes Minister" on Turkish state television would be familiar with. However, the report is also aware that, despite all the "sympathy" Turks may receive from the U.K., in Turkey there is "historic suspicions around British policy." You don't say, but let us set that aside for now.

The report recognizes that there is "intense competition between different factions for control of the state in Turkey," and describes the several groups that live and strive side by side. I believe this is called democracy and freedom of association. People with different ideologies wanting to gain power through elections and actually turning up to vote on election days in numbers European countries could only dream of is surely a sign of a robust democracy rather than a failing one. Also the British Council — which closed down its operation in Istanbul some years ago — claims the "two halves" don't interact, but has clearly never walked down İstiklal Street in Istanbul the whole time it was actually situated on it.

Following the methodology of empathizing and then criticizing, the report discusses the pros and cons of the proposed changes to the Turkish Constitution. It quotes Professor William Hale who says that there is broad agreement on the need to revise Turkey's current Constitution, which was enacted under military rule in the 1980s and includes restrictive terms. Mina Toksöz, from Chatham House, provided evidence for the report said: "The wider popular support for an executive presidency is based on the perception of a repeatedly dysfunctional parliamentary party system that in the past led to military coups. This view is reflected in the support given by the Turkish Chambers of Commerce to emergency rule following the July coup attempt. The government economic policy team also welcomed the executive powers under emergency rule as an opportunity to pass the politically difficult pension, labor market and other structural reforms." The importance of trade runs throughout the document as it does here, and the majority of criticism toward the constitutional change is that it will give more power to Erdogan — the sole item that the "no" campaign seems to be running on. After raising similar concerns throughout the report, the last analysis is that this "power grabbing" theme is a red herring as the Constitution would only make a de facto situation de jure.

Alan Duncan, who seems to have understood the current atmosphere in Turkey, has been quoted saying: "The coup attempt is the main issue in the psyche, mentality and attitude of the Turkish government and, indeed, the Turkish people at the moment ... If you don't understand it, you're never going to understand them or be able to have a proper relationship with them." In the section on "The Status of Democracy in Turkey" the same Alan Duncan says, "A regiment of the army driving tanks up Whitehall, shooting people on Westminster Bridge, trying to kill the queen and the prime minister, bombing Parliament while it was in session and taking over the BBC. That is what happened in Turkey," — the kind of thing ordinary Turks have been posting on social media to raise awareness about what happened on July 15. The reporting committee also had a moment of self-criticism: "The cease-fire between the Turkish government and the PKK collapsed primarily due to a complex and mutual rise in tensions between them, rooted largely in the developments in Syria. This conclusion represents a correction to our Third Report of Session 2015–2016, in which we were too unequivocal in placing the primary responsibility on the Turkish government for the end of the cease-fire."

The report contains many more such gems that reveal as much about the failings of British policy-making as it tries to diagnose the ills and "offers help" to the Turkish one. I look forward to seeing the tables turned, and Turkish Parliament offering advice to Britain on such things, such as how not to cave into European demands, and how not to alienate allies by targeting their industries with "security measures" that in no way make the U.K. a safer place.