Changing Syrian policies and related alliances in the Mideast 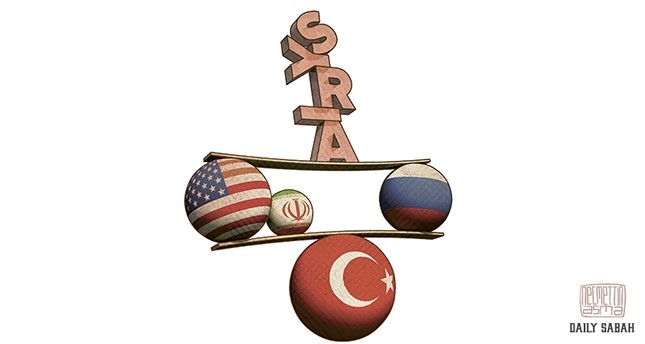 The occasional ups and downs in the region have caused the regional actors to change their policies on Syria. That's the reason behind the quickly changing alliances

Turkish-Russian relations are experiencing another resilience test these days. Caught in the middle of the U.S.-Russia escalation of tensions over the situation in Syria, Turkey resorts to maneuvering in an effort to gain favorable positions both with the U.S. and Russia.

Turkey was one of the first to welcome a U.S. retaliation strike on the Syrian regime's Shayrat air base on Apr. 4 after a chemical weapons attack on Khan Sheikhoun in Idlib was blamed on the Assad regime. At the same time, it has rendered support as well to Russia's key initiative for the Organization for the Prohibition of Chemical Weapons (OPCW) to carry out an independent investigation into the attack in order to establish who was behind the tragedy. The idea was endorsed by the leaders of Turkey and Russia in the course of their phone conversation on Apr. 13 that focused on the recent developments in Syria.

A heinous gas attack on civilians resulted in 100 people killed and 500 others, mostly children, affected by chlorine gas. The attack is alleged to be carried out by the Assad regime and it triggered a U.S. retaliation strike on the regime air base in Shariat on Apr. 4. The U.S. administration claims to be fully convinced that the Assad regime is behind the attack and prompts the world community to take a concerted effort to remove him from power. This strongly differs from the position of Russia, which refuses to recognize the Syrian regime as the attack perpetrator and calls for an unbiased international investigation into the tragedy. Russia strongly believes as well that Bashar Assad should stay in power, while the U.S. is pressuring the country to cut ties with him after a chemical attack on civilians.

No doubt these positions are uncompromising and undermine the U.S.-Russia fragile cooperation in Syria, as well as their relations in general, which have reached their lowest point in decades. President Putin admitted on Apr. 12 that the Russian-U.S. relationship has worsened under President Trump as Foreign Minister Lavrov met with U.S. Secretary of State Tillerson. The current deterioration of the situation in Syria poses additional challenges for U.S.-Russia relations' anticipated reboot with the Trump administration coming in to office. The long awaited visit to Moscow by Tillerson on April 11-12 has hardly produced an approximation of the U.S.-Russia position on Syria, as was admitted by both Tillerson and Lavrov at the joint press conference. An optimistic appraisal of their efforts tweeted by President Trump the next day that "things would work out fine with U.S. and Russia" hardly gives grounds to believe that the U.S.-Russia relations from now on will proceed smoothly. According to the Kremlin's spokesman Peskov, "it's too early to talk about a positive shift in the Russia-U.S. relations."

In his turn, Assad stated after the Lavrov-Tillerson meeting in Moscow that a gas attack his regime is accused of perpetrating was a "100 percent fabrication" and "there was no order to make any attack, we don't have any chemical weapons, we gave up our arsenal a few years ago." Nevertheless, last year the U.N.-appointed investigation panel found out that chemical weapons had been used by the regime forces and opposition fighters in 2014 and 2015, though no concrete steps were taken after.

Turkey is a hostage of the U.S.-Russian friction and conflicting approaches to the Syrian crisis resolution. An immediate neighbor and party to the Syrian peace process, Turkey has to separately team up with the U.S. and Russia for the benefit of its national interests, a demanding task to accomplish. By instantly voicing support for the U.S. cruise missiles strike on Apr. 4 and reiterating its demand for Assad to leave office, Turkey stood by the U.S. as a long-term partner and a true ally. Still, by doing this it has de facto acknowledged its disagreement with Russia's position of unequivocal support to the Assad regime.

The Turkey-U.S. relations are well established and duly grounded both bilaterally and multinationally. The countries consider themselves strategic partners in the Middle East, but the U.S. backing of the Democratic Union Party (PYD) and its military wing, the People's Protection Units (YPG), the Syrian branches of the terrorist PKK group, is increasingly damaging these relations. While Turkey considers the YPG a terrorist organization, the U.S. sees it as a cooperation partner against Daesh.

Turkey enjoyed high expectations from U.S. Secretary of State Tillerson's visit to Ankara on Mar. 30 in anticipation for a change of the U.S. position on the PYD and the YPG, but that did not happen. "What we discussed today were options that were available to us," was the way Tillerson evasively summed up their discussions.

On the other hand, Turkey is intensely developing relations of strategic cooperation with Russia recently. It considers Russia an important ally, but by no means an alternative to its cooperation with the West and NATO. The countries' approaches to certain matters of regional importance continue to remain different, if not conflicting.

Russia is the Assad regime's ultimate supporter and strategic ally, and it unconditionally believes in his staying in power. This strongly differs from the position of Turkey, which supports the tough U.S. stance that Assad must go. Russia's interest in the presence in Syria of the YPG and the PYD groups is quite upsetting to Turkey as well. Turkey's mission in Syria will not be successful if they are not removed, the Turkish leadership believes.

Polarization of the American-Russian positions on Syria will most probably continue, with Iran increasingly becoming a destabilizing factor. The Trump administration's rhetoric toward Iran is bitter and hostile. According to Trump's administration, Iran is the world's "biggest state sponsor of terrorism." These comments by U.S. Defense Secretary James Mattis came a day after the U.S. imposed new sanctions against Iran in response to its ballistic missile test in the early days of February.

At the same time, Iran is a powerful Middle Eastern player enjoying exclusive bilateral relations with Turkey, on one hand, and with Russia on the other. Brought together, they produced a tripartite equilibrium last December that was secured for the start of a cease-fire in Syria and further on launched the Astana process on a peaceful settlement in Syria. While experiencing occasional ups and downs, the process contributes to the value added to the Geneva peace talks carried out under the U.N. auspices. As well, since its launch in January it has become an efficient element of the Turkish-Russian cooperation in Syria.

According to the Kremlin's press service, "During the phone conversation on Apr. 13, the presidents of Turkey and Russia have reiterated their intention to further strengthen the truce in Syria and support the Astana and Geneva formats of the Syrian peace process."