PYD fight against Daesh not an epic 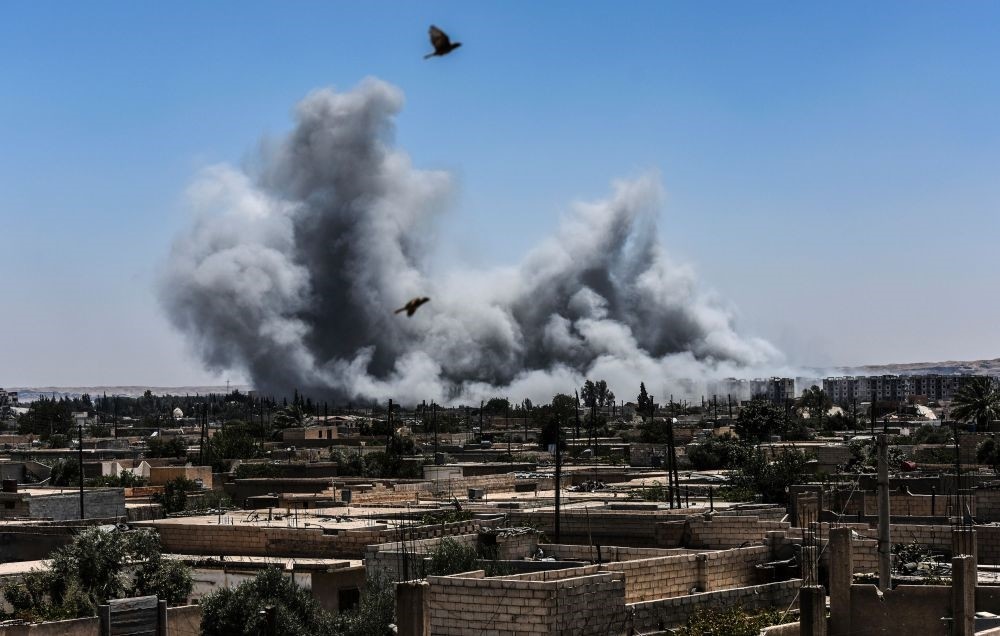 The PKK-affiliated PYD's fight against Daesh terrorists is not an epic, instead it is a cover for the dramatically redrawn political map in northern Syria with the aim to create an ideologically pure state of Syrian terrorists

As the Syrian civil entered its sixth year, explicit economic and social deconstruction of the political map of northern Syria has occurred. Even the borders of the north have been reshaped dramatically under the administrative auspices of the PKK-affiliated Democratic Union Party (PYD). Having been carried the PKK's – a separatist group that has staged a decades-long insurgency against the Turkish state and is listed as a terrorist organization by the U.S. and EU – objectives in the region, the PYD has extended its political and social interests and advanced from Afrin to Jazeera motivated by the declared aim of creating an uninterrupted geostrategic line and controlling a contiguous, de facto buffer zone that they justify as a democratic self-administration project. In order to receive the full support of powerful international actors in the region such as the U.S. and Russia, it has hushed its self-rule project based on rather sporadic cooperation with the West in obliterating Daesh and its traces from the region as a military lynchpin. Due to the fact that the PKK views northern Syria as a strategic base to deploy and shelter its militants to launch attacks in Turkey, Turkish authorities object to the unification of the de facto cantons that stretch from Jazeera canton in the east to the Afrin canton in the west. However, their territorial control was suspended by Turkey's Operation Euphrates Shield, which was motivated by liberating the Arab-majority city of Manbij in August 2016 from the PYD's People's Protection Units (YPG) militia, under the umbrella of the U.S.-supported Syrian Democratic Forces (SDF), eventually taking al-Bab at the end of February 2017. Based on the valid concerns of Turkish authorities that any incursion reaching west of the Euphrates by the YPG is as red line, Turkish troops have been successful in crippling the PYD's expansion west of the Euphrates. Thanks to the operation, the 90-kilometer Azaz-Jarablus line was saved from both Daseh and the PYD and a terror-free corridor was formed to ensure security on Turkey's southern border.

Perception operation in favor of PYD does not work anymoreSince the SDF was formed under the auspices of the U.S., a large-scale perception operation was launched to legitimize the SDF presence internationally. Former President Barack Obama's administration claimed that the PYD is not an offshoot of the PKK so they are not the same organization. Moreover, the U.S. also claimed that the SDF is a mixed Syrian force composed of various fighters from diverse ethnic backgrounds, but the reality is both non-PKK trained and non-Kurdish commanders do not have any noteworthy authority while the YPG commands and controls military operations. Hiding behind the so-called full-scale conflict with Daesh, Washington has been channeling arms to the YPG since the battle to save Kobani was launched in 2014. At that time, Ankara had cried out against shipping weapons to a terrorist organization that could possibly later be used against Turkey. Therefore, Turkey approved of channeling arms to the YPG indirectly via the Iraqi Kurdistan Regional Government (KRG) peshmerga forces as one of Turkey's closest allies in the region. The strategic decision was in Turkey's best interest while the PYD has risen for its regional desire aligned with the PKK.

The reality is the PYD's battle against Daesh is not an epic one as reflected in various international media. It is just a cover in the dramatically redrawn political map in northern Syria and the buffer zone designed with an aim to create an ideologically pure state of Syrian terrorists. Nevertheless, it will be one of the thorniest issue between regional powers in the future political trajectory of the region with a fledgling terrorist state lying primarily east and west of the Euphrates. It is known well that the Turkish-backed Free Syrian Army (FSA) and KRG peshmerga forces had an indisputable role in capturing Kobane rather than YPG forces. Furthermore, it was reported by various international news agencies that when FSA forces buckled down to capture al-Bab from Daesh militants; Daesh and the YPG did not enter into a hot conflict even though they were next to each other in Manbij and Afrin since the very beginning of Operation Euphrates Shield.Giving heavy weapons to a terror organization might have asymmetric effects in the regionEven though the U.S. and PYD leaders have promised many times that the heavy weaponry the U.S. is providing to the YPG in Syria would not get in the hands of PKK guerrillas, it is clear that Ankara has a right to its overwhelming concerns regarding what will happen to the weapons after such a slippery battle ground. Most especially, providing heavy weapons to a very well-known terrorist organization might have asymmetric effects such as attracting new fighters and consolidating the PKK's power in the not so distant future. Therefore, U.S. governmental authorities should make wise decisions, especially since U.S.-Turkish relations have been crumbling on a knife edge for a while. The military and political situation of the PYD also matters for the collective security of the region as a whole, and the unbridled state-like structure of the PYD could possibly succumb to a strategic rift between social, economic and political actors active in the fight.