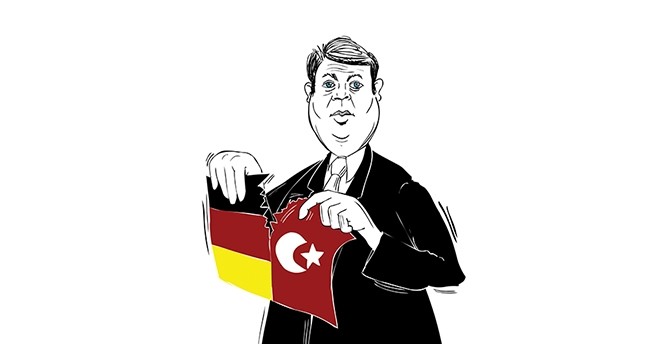 The crisis with Germany assumed a new dimension after the incredible threats made by German Foreign Minister Sigmar Gabriel. Declaring that Germany "cannot advise anyone to invest in a country without legal certainty," Gabriel added that German export credit guarantees would be reviewed. He also said that travel warnings for German citizens about Turkey would be intensified and emphasized that it is important to revise the EU's financial assistance to Ankara.

Chancellor Angela Merkel also made remarks in support of Gabriel's statements. In an important side note, Gabriel expressed that he had consulted with the Social Democratic Party (SPD) leader Martin Schulz and other opposition parties about his positions and received their support.

Why did Gabriel make these statements? Gabriel got tough on Turkey, so to speak, after a group of suspects were detained following a meeting on the island of Büyükada in the Sea of Marmara off mainland Istanbul, with some of them subsequently arrested.

On the other hand, Gabriel also remarked on investigations and trials regarding the July 15 coup attempt and went on to say: "Unfortunately that coup attempt took place, but the practices after that incident deviated from international legal norms." Also Bruno Kahl, the head of Germany's Federal Intelligence Service (BND), previously had said there is no evidence that shows Fetullah Gülen was behind the July 15 coup.

These statements amount to a double standard, to put it mildly. While Germany dismisses Turkey's rightful demands about the Gülenist Terror Group (FETÖ) and PKK terrorist groups, which it virtually protects, saying it cannot interfere with independent German courts, when it comes to Turkish court decisions, it accuses the government of interfering with the judiciary. It considers itself a judge and prejudges the outcome of ongoing trials in Turkey.

What are Turkey's demands?

Moreover, both the coup attempt on July 15, 2016, and the innocent people massacred by PKK militants are an internal matter for Turkey. In other words, Turkey's demands from Germany regarding the issue are not about Germany's internal matters unrelated to Turkey. Turkey demands the extradition of criminals and terrorists in accordance with international agreements. However, Gabriel not only intervenes in trials in Turkish courts against a terrorist group that killed 249 citizens and bombed Parliament, he also keeps silent about Germany becoming a safe haven for FETÖ members. The same is true for the PKK and other groups. As the lamentable progress of the long-running trial in Germany of the last National Socialist Underground (NSU) member, who is being charged with murdering Turks among others, is pretty obvious, one should be more careful to avoid making arrogant remarks.

Turkish officials were swift to respond to Gabriel's statements. Presidential spokesman İbrahim Kalın said in response: "We think that those unfortunate statements are about internal politics aimed at the approaching elections in Germany. This has become a kind of fashion in Germany. They are trying to score points. They need to rid themselves of this abdication of reason and think rationally. Many innocent citizens of ours have been treated as spies. They are in an effort to cover up the NSU murders. We have shown them to German authorities again and again. Germany still continues to be the top place where FETÖ fugitives and traitors who betrayed this country go. How can German authorities turn a blind eye to them? When we put our files regarding these matters before them, they say, there is judicial independence here. Well, why don't they respect the judicial independence in Turkey? This is disrespectful to Turkey. First, they should respect our judiciary. Secondly, we strongly condemn the remarks that German citizens traveling to Turkey are not safe."

Foreign Minister Mevlüt Çavuşoğlu also said that threats and blackmail would find no answers in Turkey, adding that Germany behaves against the spirit of friendship by harboring members of FETÖ and the PKK.

Germany will hold parliamentary elections in next September. As we have previously seen in the Netherlands and France, Turkey and President Recep Tayyip Erdoğan became tools for internal politics. In a dangerous trend, Europe is succumbing to populism. Mainstream political parties try to make up for their failure in finding rational solutions to problems by resorting to populist discourse. In France, however, mainstream political parties were completely pushed aside in recent elections for the first time since World War II. While new French President Emmanuel Macron's new movement won a victory, ultranationalist Marine Le Pen's party consolidated its rise.

In fact, Merkel and her Christian Democratic Union (CDU) seem to be the ideal team for Germany. I would say that Merkel is affected by this surge of populism and faces pressure in regard to improving relations with Turkey. Merkel is aware of the importance of Turkey and relations with it. On the other hand, Schulz has long scored points through an anti-Erdoğan and anti-Turkey position. We will see if any improvement on this occurs after the elections.

But the souring of Turkey's relations with both Germany and some other European countries, as well as with the U.S., cannot be attributed solely to elections. Yes, it is a factor, but not the only one.

With its frail economy, crisis-ridden politics and inadequate infrastructure, Turkey had been dependent on foreign countries. As a member of the Western bloc and a NATO ally during the Cold War, it had been perceived as an outpost, a giant base to be used on demand. Due to its high debts to the International Monetary Fund (IMF), frequent economic crises and military coups, it could not realize its potential for its own sake.

The importance of economy

Over the last 15 years, however, that picture seems to have changed. The Turkish economy, which is currently the world's 17th largest, is expected to rank 11th by 2050. Meanwhile, the Netherlands will go down by nine and Germany by four places. In addition to China, India will also overtake the U.S.

Naturally, Turkey is quite important, not because of its growing economy and young population, but because it is a pivotal country situated at the confluence of energy corridors and neighboring the Balkans, Caucasus and Middle East. The restoration of the Silk Road will further strengthen its key position.

In short, Turkey is taking firms steps to evolve from a dependent country to an actor in its own right. And this, in turn, shows that the country approaches the point at which it is no longer possible to control it from outside. This is obviously an unwanted change and is understandable to a certain extent. After all, we do not live in a rose garden.

Turkey demands an equal relationship with its allies now. And everyone knows that this is a legitimate demand. Still, there are occasional attempts to stall Turkey's progress, as observed during the July 15 coup attempt. Thus it becomes clear why FETÖ and the PKK are welcomed as a lever and trump card for this purpose. In fact, it is no longer possible to hide this situation.

It is not realistic to expect any change in situations like the U.S.'s shipment of 629 trucks of military aid to the People's Protection Units (YPG), the PKK's Syrian affiliate Democratic Union Party's (PYD) militia, and in Germany's attitude on Turkey until a new balance is reached.

But the plausibility of this expectation does not alter the fact that what they do is wrong. For by repelling the July 15 coup and internal invasion attempt, Turkey has shown that it cannot be controlled from within and that it will not allow civil strife. A rational actor would not prefer terrorist organizations to a secular, democratic and legitimate Western country that is thriving and open to cooperation. Turkey is a country that is governed rationally, that can talk to, work and cooperate with both the East and the West.

Who knows, maybe an initiative intended to prevent the row from becoming more toxic and return to rational ground in recognition of the ongoing change could appear. I just hope this option, which seems to have a lower probability for the moment, will prevail in the end.