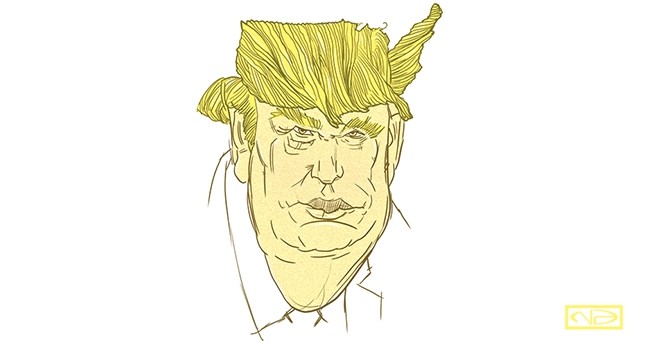 While there is an ongoing political turmoil at the White House, Trump is also vehemently in trouble with the constant accusations for Russian involvement in U.S. policies

Elusive goals will eventually lead to convulsive ecstasy. U.S. President Donald Trump once proudly admitted that he did not pay a dime in federal income taxes for years by simply exploiting tax loopholes that are lawfully accessible to any tycoon.

Whether it was tax evasion or tax avoidance, Trump has done it and has not been held accountable. However, running a state is utterly different from managing a business venture, as being a president is totally different from being a CEO. Additionally, unlike business taxes, political tax evasions have fatal and catastrophic repercussions, and their political loopholes are tightly limited.

Amid the nonstop political turmoil in Washington, Trump is vehemently criticized for his son's involvement with a Russian lawyer during the campaign period. Natalia Veselnitskaya, reportedly known as a Kremlin-connected Russian lawyer, managed to meet with Donald Trump Jr. during the 2016 campaign after luring him with damaging information about his father's competitor, Hillary Clinton.

Primarily, Trump Jr. reiterated that the meeting was about the adoption of Russian children. However, he released his emails revealed that he was offered incriminating information about Clinton. The White House still insists that the president had no knowledge of the meeting, despite being in Trump Tower that same day.

These latest accusations dealt another blow to an already turbulent president, putting him under further skepticism of possible collusion with Russia, or at least turning a blind eye to Russia's meddling in the U.S. presidential election. Russia's involvement in the election has been on the agenda since Trump's inauguration, and the firing of FBI Director James Comey was to some extent Trump's concession on Russia.

For the first time, Trump signed a bill without cameras. A bill that contains a new package of sanctions on Russia was issued in December, the last month of former President Barack Obama's term. Congress had been debating the legislation for the past eight months before passing it, leaving Trump little chance to challenge or decline it.

It is crystal clear that Trump was reluctant to impose new sanctions on Moscow, but with nearly unanimous Congress consensus, he was no room to maneuver. Moscow promptly reacted by expelling some 755 American diplomats from the U.S. Embassy in Moscow and from other American diplomatic missions in Russia.

Undoubtedly, the bill's endorsement effectively handcuffed Trump at the moment he was pitching boosting strategic cooperation with Russian President Vladimir Putin. Congress's near unanimous approval of the legislation is an irrefutable sign that the overwhelming majority of members of Congress do not trust Trump's approach toward Russia. That is why they intended to impose key limits on his leeway for action by passing this new package of sanctions.

The question is will this tit for tat policy negatively affect the two powers' prospect scenarios for the Middle East?

Trump's meeting with Putin on the sidelines of the G20 Summit on July 7 lasted more than two hours after being scheduled for 30 minutes. Secretary of State Rex Tillerson said there was "positive chemistry" between the two presidents and that the focus was principally about moving relationships forward and disregarding the past.

It is not clear what range of issues the two leaders talked about, but the Middle East was definitely the crux of the entire meeting. Both leaders discern that the Middle East has become a fiery cauldron in which the global order is either rationalized for a new era or melts down entirely. Syria is the first test.

Recently, Washington halted its support to rebel groups fighting Syrian regime forces, but continues to support the terrorist PKK-affiliated People's Protection Units (YPG) militia in northern Syria on the pretext of its effective role in rooting out Daesh from Raqqa. According to the Washington Post, Tillerson advocates Bashar Assad's removal as he said recently that Assad "must leave and go home." One wonders how Assad might go home when the U.S. cuts its alleged support to the opposition that is supposed to topple him and replace his regime.

The irony stems from the fact that Trump's stated objectives coupled with field practices boost the chances of these scenarios. De-escalation zone is literally a euphemism for soft partition where each party claims responsibility for its region and shares a piece of the cake.

Profoundly, the new Middle East playbook includes a three-tiered panorama of imposing an inevitable de facto partition of sovereign Middle Eastern states, establishing fragile autonomous entities based on sectarian or ethnic orientations and generating unrivaled need among the new entities for U.S. support so that they can survive and combat neighboring adversaries.

Instead of empowering real influential regional powers, international powers rely on non-state militias that could eventually lead to an inevitable partition of the warring countries. In other words, Syria, Iraq, Libya and Yemen are incrementally tottering down the path of partition that will end up ultimately producing de facto fragile federal statelets.

In Syria, Assad attempts to claim control over the entire country, terrorist militias demand greater autonomy and opposition groups reiterate that Assad cannot stay and his regime must go. Radical groups still pose imminent threats by wreaking havoc across the nation and spoiling any agreements.

Conflicting statements from Washington and Moscow make political analysis of the trajectory of the whole area uncertain and preposterous. The fluidity that engulfs the whole region turned phrases like long-term strategies and Middle East policies into trivial clichés.

There is almost a new strategy every morning. Recently, the U.S. and Russia sought greater cooperation. They succeeded in establishing a cease-fire last month between Syrian regime forces and rebels fighting in the southwest. Tillerson reiterated U.S. support for the de-escalation plan.

Presumably, peace talks in Geneva will continue under the auspices of the U.S. while Russia, Turkey and Iran will maintain talks in Astana, Kazakhstan. These peace talks manifest the widening gap between the real standpoints between regional and international powers and that conditions had not yet been established for unified policy alignment to end the ongoing bloodshed in the Middle East.

The West should negotiate insightful resolutions for the ongoing conflicts to provide protection for their interests and provide wide-ranging latitude for local and regional self-determination. Ongoing floundering strategies of unwinnable wars help nobody but the radicalization of reformers and absence of sanity and the murder of humanity.

If carnage and spilled blood alone fail to sway the West, then graver and catastrophic images are still to come from these devastated countries. A stepped-up, sincere effort against dictators in tandem with empowering sincere, regional partners should provide greater prospects for the whole world.