From Astana to where? Continuing diplomatic ambiguities in Syria 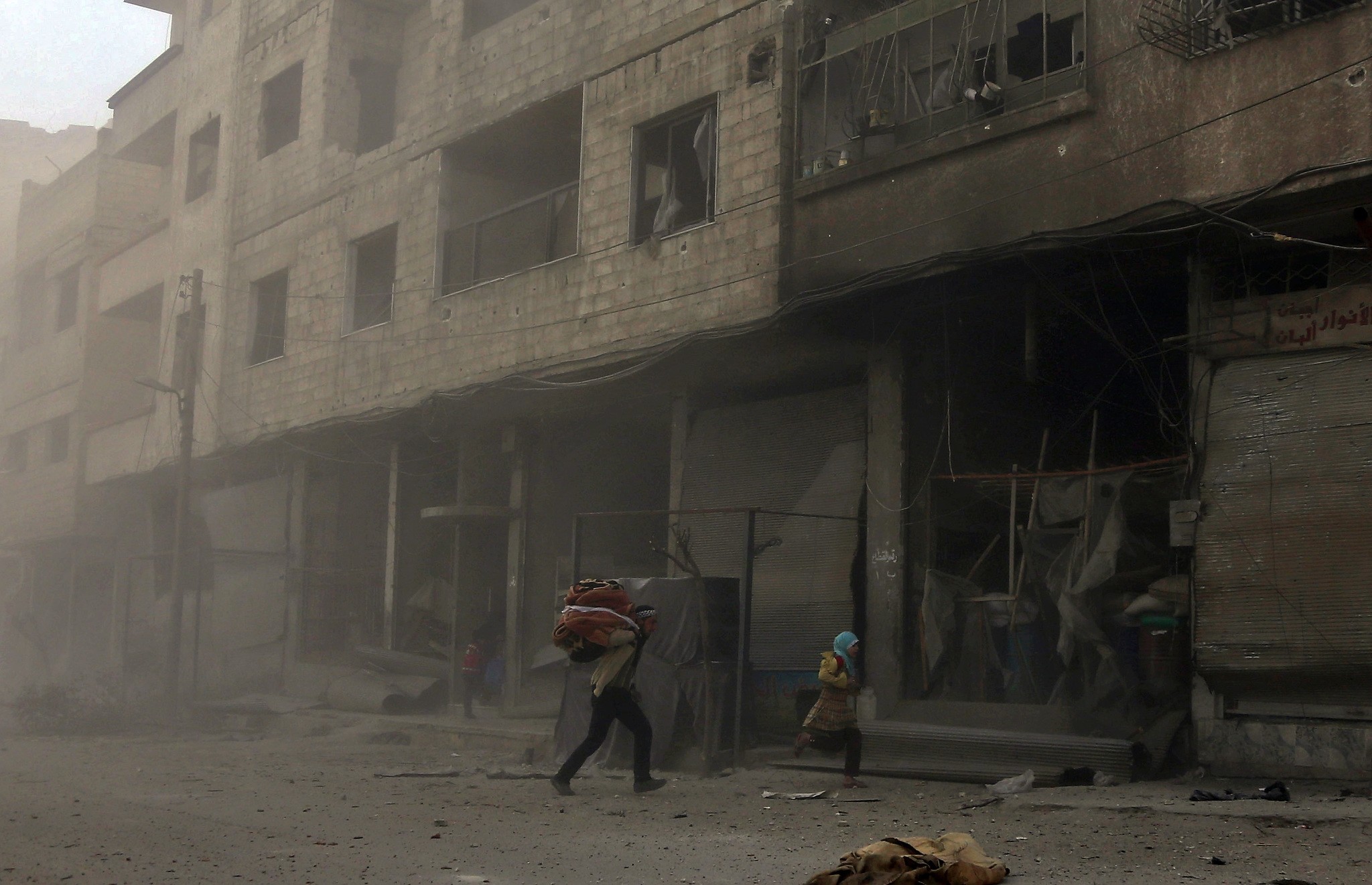 Syrians run from cover in Hamouria during regime shelling in the Eastern Ghouta suburb of Damascus, March 6.
by Talha Köse Mar 09, 2018 12:00 am

The fast-changing power balance in the Syrian field makes rational calculations and predictable policies futile. The realities on the ground necessitate a periodic reassessment of the policies on the ground for all parties. None of the actors can think about a long-term strategy, thus each of the actors returns to their red lines when they face difficulty on the ground. The Astana talks between Turkey, Russia and Iran were a very important pillar of stability efforts in Syria. The Astana process helped to reduce the tension between these major players in Syria, but each of these actors interprets the logic of the agreement differently. The differences of opinion between the parties lead to occasional skirmishes in the field. Expecting the parties to trust each other may be too idealistic at this stage but they at least expect more predictable moves from their counterparts.

First of all, we can consider the Astana process a diplomatic success because it reduced the tension between the three major actors in the Syrian field and allowed them to focus on a broader plan for the stability of Syria. Indeed, the Astana process envisages all the parties, including the Bashar Assad regime, to abandon their maximalist claims over the future of Syria.

The Astana process also made the possibility of regime change via armed opposition almost impossible, which may be considered a significant loss for the opposition groups. Turkey, Russia and Iran re-evaluated their positions with regard to Syria and decided to focus on their fundamental priorities, rather than struggling to gain a victory with high unpredictable costs.The reality on the ground, however, is quite different. The Assad regime continues to devastate Eastern Ghouta, despite the U.N. Security Council (UNSC) resolution which called for a 30-day cease-fire in the opposition-controlled Damascus suburb. The Astana process gave an advantage for Assad to focus more on particular areas to suppress the opposition cruelly. Assad thinks this bloody campaign will also frighten the other opposition strongholds, that is why he continues his attacks despite the UNSC resolutions. It seems that the Assad regime did not abandon its maximal claims over opposition-controlled areas of Syria. Russia and Iran are also unwilling to put pressure on Assad to change its bloody campaign.

Eastern Ghouta was not included in the Astana agreement but, the level of humanitarian tragedy and civilian devastation contradicts the overall logic of the agreement, which aimed to bring stability to the country.In line with the agreement with Russia and Iran, Turkey initiated Operation Olive Branch to contain its borders from the terror threat of the People's Protection Units (YPG) and Daesh. Turkey's operation specifically targets the terrorist organizations along its borders. Turkish authorities also try to create a secure zone to allow the return of at least a fraction of more than 3.5 million Syrian refugees in Turkey to return to their country.

Iran seems to be disturbed by Operation Olive Branch and Turkey's efforts to deploy troops to monitor de-conflict zones that were agreed on in the Astana agreement. Iran's long-term plans in Syria and efforts to strengthen their military presence especially in the southern and western parts of Syria is not a surprising act. Iran constantly uses the pretext of an Israeli threat and their national security to strengthen their military presence and militia formation in Syria. It seems that the reduced pressures over the Assad regime due to the Astana agreement recalled Iran's maximalist claims again.

Iranian authorities want to keep Turkey as a minor actor in Syria and they seem to be unhappy about Turkey's success in Operation Olive Branch. The tension between Turkey and Iran may increase as Turkey's operation continues to be more effective. Iran misses no opportunities to create hurdles for Turkey in Syria despite the agreement between the two neighbors, whereas Russia wants to keep its position and bargaining power in Syria at a higher level than its counterparts. Rather than competing with Turkey and Iran, the Russian side wants to use its upper hand in Syria as leverage in superpower politics.

Keeping both Turkey and Iran on its side with its Syria policy and maintaining the Astana process is a smart strategy for Moscow but there are serious hurdles ahead. If the Assad regime and Iran do not abandon their maximalist claims in Syria and try to rebut the terms of a tacit agreement, we can see more unnecessary tension between these two actors and Turkey. The YPG and its main sponsor, the U.S., will be the main beneficiary of these tensions. The Astana process does not guarantee a long-term agreement between the parties if they do not focus on a long-term political deal and if they do not abandon their maximalist claims due to their contextual gains they may find themselves in a disturbing deadlock.