Why the opposition keeps losing in Turkey, explained in one tweet 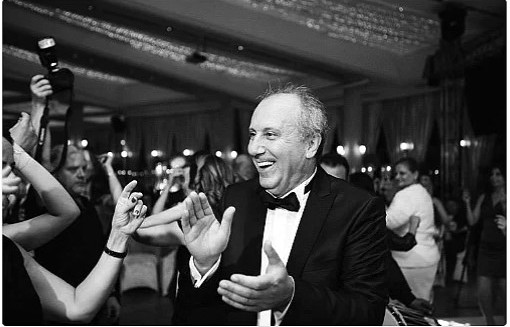 On June 24, Turkey's ruling Justice and Development Party (AK Party) and President Recep Tayyip Erdoğan celebrated yet another election victory since the party's formation in 2001. In fact, on June 24 two elections were held on the same day, making it their 14th win since the November 2002 elections, when they first participated. AK Party and Erdoğan's victories in the past 16 years also mean that Turkey's opposition, namely the strongest rival against AK Party the main opposition Republican People's Party (CHP), has lost 14 times consecutively.

But how can a party win 14 elections in 16 years and how can a main opposition party, the oldest party in the country, keep losing for more than a decade-and-a-half and not surpass a 25 percent vote share?

There can be several explanations, ranging from simple to complex, as to why the ruling party keeps winning. For example, the ruling party's triumph can be attributed to the fact it has been very successful in delivering the socioeconomic demands of people or more simply, populism has coincidentally translated into votes in the elections.

On the other hand, why the opposition keeps losing, is also a crucial question to ask. Is it a failure of campaign strategy? Is it a failure of rhetoric? Or is it a failure in coming up with a charismatic leader?While these questions may be answered with a combination of reasons in any other country, in Turkey's case the answer is that: The opposition party has positioned itself as the sole owners of the "political truth" with its ideological camp at a sociological and political distance from the majority of voters – these are among the reasons as to why the CHP keeps losing in Turkey.

This "distance" between the CHP and the public, which is often seen as leverage by the members of this "elitist ideological camp" that looks down on the majority of the people, can be exemplified in a tweet shared by an account with about 1.5 million followers that was widely shared [criticized] one day before the elections. What did the tweet, which was later deleted by the account owner, say? Shared with a photo of CHP's presidential candidate Muharrem İnce wearing a tuxedo, laughing and clapping at a party, the tweet said, "Tomorrow night we will celebrate just like this, wearing our nice outfits and champagne in our hands. Beauty, cleanliness, comfort, nobility is coming. The shoe smell is leaving the country."

While this does not represent, of course, the official position of the CHP, or perhaps the stance of many of the followers of CHP, unfortunately, it is because of this very attitude that, very simply, the CHP has kept losing.

The pro-Western, secularist and elitist political camp that has led the CHP since its formation has failed to embrace the social and political realities of the country and kept burying its head in the sand. One of the main indicators of this distance is that the people have chosen the center-right parties and given them the longest chances to rule since Turkey transitioned to the multiparty systems. The Democrat Party, Justice Party, the Homeland Party and finally the incumbent AK Party governments are clear examples of the sociological reality of Turkish voters.

The CHP has, on the other hand, positioned itself on a center-left spectrum. However there is some reality about Turkish voters being mainly center-right, and although the CHP does not have to position itself in a way that would contradict its values and principles, it does show that in terms of ideology and rhetoric the party needs to acknowledge its electoral audience.

The center-right and moderately conservative [and nationalist] characteristic of Turkish voters is not a new phenomenon that emerged with AK Party in the early 2000s. The center-right/moderate/nationalist pole versus the pro-Western, secularist, center-left dichotomy has existed since the 1950s and onward. In fact, these dichotomies can be expanded to urban/rural, educated/non-educated, middle-class/poor rivalries which have been in competition in shaping the country's democracy since the beginning of the multiparty systems.

On the one hand, the agents are on the periphery of the country; on the other hand, the agents of the political elite are in the country. The periphery has seen democracy as its sole tool to achieve power in governing the state and ultimately building a democratic culture. The elitist "core" on the other hand, has traditionally used the regime, combined with bureaucratic and military elite to maintain its power and leverage over the state and its apparatuses.It could be suggested that such rivalry for political power, which mostly resulted in the triumph of the periphery through democratic means, has led to several disruptions to the development of Turkish democracy via military coups; i.e. the 1960 coup, 1971 memorandum, 1980 coup, the Feb. 28 post-modern coup, et cetera.

Yet, the times when the people did not resist the military coups and gave in to their consequences are over, and this was evident with the people's stance against failed coup attempt on July 15, 2016. The people, with the advantages of advanced communication, technology and information, have taken ownership of their democratic rights and are able to defend their political positioning more effectively. They no longer fail to resist to the discourses of the political elites of the pre-2002 era.

The main opposition's ideological camp, however and unfortunately, has not yet left the era of looking down on what was once the "periphery" of Turkish politics. The voters of a party, which has won 14 elections in a row, are still seen as the "shoe smell" or the ignorant and backward in society.

The opposition supporters are afraid to leave their cozy and posh neighborhoods of their tight circles.Thinking that the world does not exist beyond their few neighborhoods in Istanbul and few provinces in the western coast of Turkey, they fail to realize that they are only burying their heads in the sand. This is, precisely, what also caused the hype ahead of the June 24 elections and why the opposition candidate was seen as a hope for their win. Their failure to see actual Turkey, combined with the push by their Western political allies and media to eliminate Erdoğan as a rival, has led them to continue looking down on a majority of the people labeling them as "shoe smell" leading to their ultimate loss, once again.

"Turkey is no longer the Turkey of the past" is a cliché phrase nowadays. Yet, it is precisely this phrase that the opposition keeps failing to see or knowingly ignores. With the developments in the past decade in many realms, the voters have advanced themselves in preserving their democratic positioning and knowing who could have a higher chance in bringing them the progress needed on individual and societal levels.

As such, despite the CHP candidate's populist and rather conservative rhetoric during the election campaign, the voters' memory has not let go of the party's "ideological camp" that sees them as "backward," "shoe smell" or several other derogatory phrases used for them.

In addition, voters saw that the main opposition's campaign was solely about "getting rid of Erdoğan." In fact, if a miracle happened and this idea was removed from their campaign rhetoric, one would wonder if they would have had any other arguments to talk about. This sole "action" [Erdoğan's removal] was what was being promised by the main opposition, and also led to the unification of the other opposition parties with the CHP. This promise of "action," which united several ideologically dissimilar parties, did not also rise from a concrete vision.

Hypothetically speaking, if the CHP candidate had won and Erdoğan was removed from power, this would have meant they had achieved their campaign pledge. What their vision was for the country and for the people, however, would be an unknown to be discovered. This is another reason why the "periphery" did not let go of Erdoğan, the man accustomed to winning, as the voters know what he has achieved in the past 16 years for the country and can see vision in his promises.

Without "genuinely" understanding the sociocultural and sociopolitical foundations the "periphery;" without understanding the moderately conservative formation of Turkish society; without successfully establishing a collaboration between this conservative mind and secular Turkish democracy; without coming up with tangible social and economic promises; without having a strong stance against terrorist groups threatening the country; without putting Turkish society first and seeing the West above society's values – and ultimately without providing a vision that would unite people on one common cause – the cause of carrying Turkey to the future together – the CHP will go many years without the trust of voters and will keep losing many elections to come.