The June 24 elections' message to the world 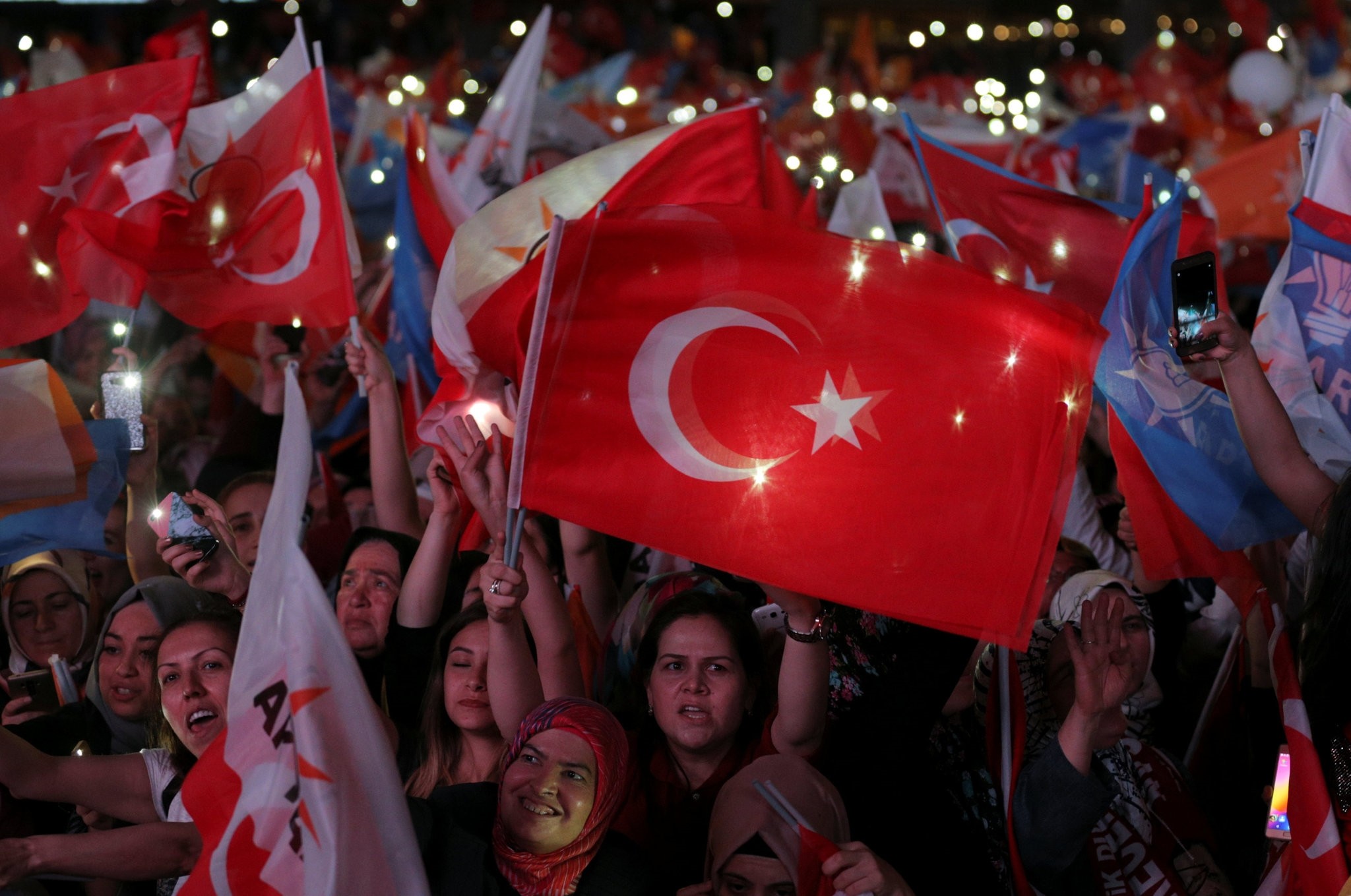 AK Party supporters wave flags to celebrate the June 24 results in front of their party's headquarters, Ankara, June 24.
by Markar Esayan Jul 05, 2018 12:00 am

Turkey's presidential and parliamentary elections on June 24, which were eagerly awaited across the world, took place in an atmosphere of tranquility and democracy. Early election results became clear by 9:00 p.m. local time and opposition candidates accepted defeat. The Supreme Electoral Board (YSK), which has the powers of a high court, stated it will announce the official results the following Thursday.

Objections would be reviewed and decided within the electoral districts where they were raised. These are routine democratic processes in every election. Especially within electoral districts that saw narrow vote margins, candidates or parties object the results as a formality. But usually this does not change the outcome.

Turkey has an established, well-functioning, rather secure electoral system with an advanced technological infrastructure. Every party has polling clerks at each ballot box. There is a ballot box committee chairperson who controls them, a person in charge of the building controlling these chairpersons, a YSK representative overseeing the latter and finally district and provincial election boards overseeing all of these. Sitting atop the system, the YSK ensures nationwide coordination and decides on the objections.

A near record, 90 percent of approximately 60 million voters went to the polls. This turnout represents an amazing democratic maturity, especially when compared to the weaknesses of participatory democracy in the world in general and the West in particular. The center is robust but peripheral parties also made it to Parliament in line with their strengths.

Turkish people approved the presidential government system in a referendum on April 16, 2017 with 51.4 percent of the vote. Unfortunately, before that vote, Europe and the U.S. shed their neutrality regarding the exercise of this democratic right by openly supporting the "no" campaign. Though referendums are one of the pinnacles of democracy, they meant to say, "We know better than your people."

It was an unprecedented attitude. For example, Britain has not faced such a reaction during the Brexit referendum. When Brexit was approved by a narrow margin, no one brought Britain's referendum into question. Similarly, regarding the state of emergency decision, a constitutional right, unlike France, Turkey received much criticism though it underwent a coup attempt and a series of terrorist attacks.

The meaning of the state of emergency in Turkey

Turkey was exercising a legitimate right by resorting to national will to reform its government system. On the other hand, the state of emergency was declared as a measure against the putschist Gülenist Terror Group (FETÖ) elements that infiltrated state institutions and terrorist groups like the PKK and Daesh.

During the recent elections, President Recep Tayyip Erdoğan and the Justice and Development Party (AK Party) were not allowed to conduct a campaign for Turkish citizens living in Europe and eligible to vote. Of course, the exercise of this right must be in line with the laws of the related countries. Turkey cannot violate the laws of another sovereign country.

While Erdoğan and the AK Party were denied this right, the Peoples' Democratic Party (HDP), the Republican People's Party (CHP) and even the PKK were allowed to hold events. So, this means that conducting a campaign is not unlawful. In doing so, these countries took sides in Turkey's elections, breaking the rules themselves.

The European Parliament formalized this partiality by not sending observers to the Turkish elections. It was out of a secret goal to create legitimacy for the controversy on the results planned by the opposition, especially in the event of closely-contested race. Foreign media tried to manufacture perception through partiality, in blatant disregard of media ethics. We have watched and noted down all this with disbelief.

It was obvious that they did not want President Erdoğan and the AK Party to win the elections. Indeed, statements made during and after the July 15 coup attempt remain vivid in memory. Turkey will never forget this attitude by various organizations and its so-called allies and friends.

Certainly, we also want to see some actors come to power and others go away in European countries or in U.S. parties and leaders we like or abhor. But we have not attempted and will never try to influence the outcome of elections there by placing ourselves above their citizens. For we respect democracy. How a country is to be governed should be decided by its people with the ballot box. Once the decision is made, we just have to respect the results.

Strangely, however, when it comes to Turkey this rule does not hold. And this represents a type of derailed relationship. Turkey should not be approached with such arrogance, the people's decision should not be disdained or ignored. We watch the rise of racism in Europe with concern, but do not think of meddling with their internal affairs.

President Erdoğan won the latest elections receiving 52.6 percent of the vote, getting 11 million more votes than his closest rival Muharrem İnce in such a difficult election. All opponents within and outside the country should accept this. Otherwise, the atmosphere would be poisoned. The AK Party came first in 64 out of 81 provinces, the HDP in 11 and the CHP in six.Thanks to the presidential government system, the 10 percent electoral threshold was effectively removed, with nearly 100 percent of the electorate being represented in Parliament. Can there be a more optimal democratic outcome? Both stability in government and fairness in representation are ensured.

Decline in the Nation's Alliance

Though it ran alone, the HDP received unofficial support from the Nation Alliance. The CHP wanted to include the HDP in the alliance, but other members of the alliance objected. Because the HDP has already proved it is the PKK's political arm, defended violence, attended terrorists' funerals and threatened people with the PKK. Not wanting to lose the votes of nationalist and Kemalist supporters, the CHP and others secretly supported the HDP in an organized manner.

The HDP saw a serious decline all over the southeast and the east, which had suffered much at the hands of the PKK during trench terror. Vote share decrease to 14.55 percent in Şırnak, 13.26 percent in Hakkari, 13.02 percent in Muş and 8.54 percent in Mardin.

Apart from its impacts on elections, this tendency is valuable in terms of national unity and integration. We can safely say that the CHP enabled the HDP to pass the threshold. The HDP managed to enter Parliament through votes from the CHP supporters in western regions. So, it's clear now that the CHP and HDP are one and the same party. The CHP has virtually become another HDP. Considering the HDP's function, it is a shame for the CHP.

Of course, these evaluations exclude voters. We think that voters will hold their parties to account at the first opportunity when they grasp the situation. What is positive for Turkey is that Kurds, who have gone through PKK terror, have begun to leave the HDP. In western regions, however, "white Turks" who have never faced the PKK's violence and pressures supported the HDP in part due to their "hatred of Erdoğan," ignoring the HDP's ties with the PKK.

In all cases, democracy has won. Turkey gave a clear message to the world. Coups and perception operations are not an option in Turkey anymore. Turkey is an independent, sovereign and strong nation. Its people have democratic maturity. From now on, these facts must be kept in mind when maintaining relations with Turkey.