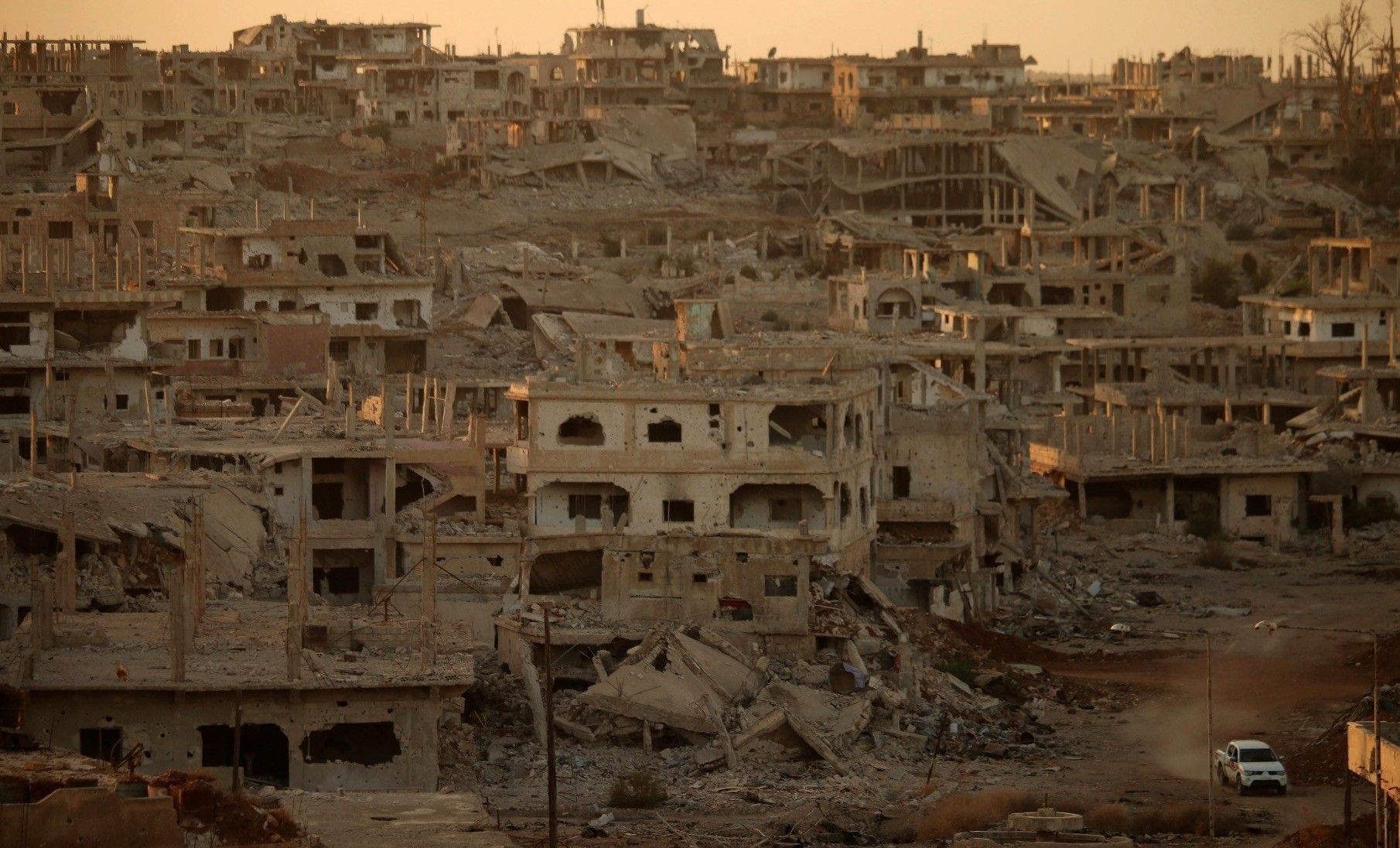 A truck drives through a street damaged during deadly clashes between regime and opposition forces, Daraa, southern Syria, Nov. 16, 2017.
by Bashdar Pusho Ismaeel Aug 13, 2018 12:00 am

Increasingly resurgent Syrian President Bashar Assad is in a quest to reclaim all Syrian land from opposition forces as opposition strongholds continue to buckle. These victories, usually the result of fierce bombardment and blockades leading to eventual evacuation agreements with opposition forces, are seemingly underpinned by wider agreements between Russia and the U.S. that have emboldened Assad.

Following victories around the suburbs of Damascus, the regime forces quickly shifted focus further south with the national flag raised in the symbolic town of Deraa. Victory was made all the sweeter for Assad, as Deraa was the place where peaceful protests in 2011 soon morphed into violence and a full blow civil war that has lasted almost eight years.

The latest victory for Assad is the region of Quneitra that borders Israel and the disputed Golan Heights. With the end of de-escalation zones in these areas, opposition forces quickly realized that with no U.S. or foreign support in sight, they were no match for Syrian forces heavily augmented by Russian and Iranian firepower.With pockets of opposition and Daesh forces to clear in the south, Assad and his Russian backers will then have the last opposition stronghold of Idlib in sight.

While Assad may well be in the ascendancy, this does not signal a looming military or political end for the Syrian civil war. Any battle for Idlib is likely to turn into a protracted and bloody saga that may cause flee of civilians towards Turkish borders. Then there is the question of large swathes of territory under the PKK-linked People's Protection Units' (YPG) control east of the Euphrates that serves as yet another complex flashpoint.

Unless various sides can strike elusive political deals, then any Assad mission to wrest control of both these areas will not be easy. On the other hand, political reconciliation and peace talks are often determined by the military reality on the ground.

Assad's forces are not as overstretched as before so can focus significant firepower on one area.It remains doubtful that an increasingly confident Assad and his allies will make significant concessions over Idlib when they failed to budge to opposition demands when at much weaker points in the war.

In reality, Damascus may find it easier to negotiate some kind of agreement with the PKK-linked YPG over territory east of the Euphrates than finding an acceptable agreement with the plethora of opposition forces that are scattered across Idlib.

As always, the future political and military direction of Damascus is largely defined by Russia and to a lesser extent Iran and the U.S. After all, victory for Assad would never have been possible without significant Russia support and their direct intervention in 2015.

Russian influence has been clear both in the sky as Russian warplanes relentlessly target opposition forces but also on the ground where Russian mediation was key to the evacuation agreements signed with opposition forces.

After such hefty political, financial and military investment in the Syrian war, neither Russia nor Iran are about to end their support for Assad or loosen their strategic geopolitical goals in Syria.

The U.S., whose primary focus has been on eradicating the threat of Daesh, is now more focused on ensuring that growing Iranian influence is checked than challenging Russia on the fate of Assad.

In the recent meeting between Russian President Vladimir Putin and U.S. President Donald Trump in Helsinki, Finland, it appeared they fostered some kind of deal over Syria.

With Trump accepting that Assad stays in power, the agreement centered on distancing Iranian forces from the Israeli border and effectively making Syria a Russian protectorate.

It seems more palatable to Washington to have a stable regime in Damascus in a permanent state of peace with Israel guaranteed by Russia than supporting a lost opposition cause in Syria that would suck the U.S. deeper into the war.As de-escalation zone agreements were ripped up, the lack of a U.S. outcry or support for rebels signaled Trump's endorsement for Russian plans to take over borders areas with Israel and Jordan.

As for Israel, concerns about the growing Iranian presence on its doorstep have led to a number of airstrikes against predominantly Iranian targets in Syria. The increased hawkish stance of Israel suggests that they are ready to ratchet up air strikes on Iran as well as Assad, a scenario that Russia would naturally seek to avoid.As long as Iranian influence is checked, Israel, like the U.S., can live with an Assad regime that does not threaten its borders.

Although Trump has signaled his intention for a swift withdrawal from Syria, he must do so without leaving a trail of instability and new front lines in Syria that adversely affect U.S. regional interests.

For example, Washington has backed the Syrian Democratic Forces (SDF) that have been the key to defeating Daesh in Syria, but now finds itself in an uneasy mediator role between Turkish forces and the SDF.

It remains unclear what the end strategy looks like for the U.S. The U.S. presence east of the Euphrates gives it a seat at a present and future table with Syria, but in reality Russia remains the key player in determining how the next episode of the Syrian war pans out.

Military success never preludes political acceptance but opposition forces or the long-suffering people may have to accept after seven years of violence, displacement and utter destruction, that Assad is here to stay.

Russia, the U.S. and to some extent Israeli dealmaking, puts Iran in a tough corner. Iranian support for Assad forces has been instrumental in keeping him in power but Putin and Assad have to make some tough choices of their own to cement their gains in Syria.

If Assad retains strong ties with Tehran and allows strong Iranian influence, Israel is unlikely to remain a bystander, while also reaching eventual reconciliation with Saudi Arabia and neighboring powers much more unlikely.

It appears that Assad and Russia may decide on protecting their goals in Syria rather than appeasing Iran. With new sanctions and economic troubles, Iran has problems of its own that it must resolve. All the signs point to Russian financial support for Tehran that has led to a number of deals with Russian firms in the Iranian oil sector.

Tehran may have no choice but to accept some concessions in Syria if it can safeguard its economic stability by working closely with Russia. However, one way or another, Iranian influence in Syria is here to stay.