Instability in Syria escalates as US continues to back the YPG 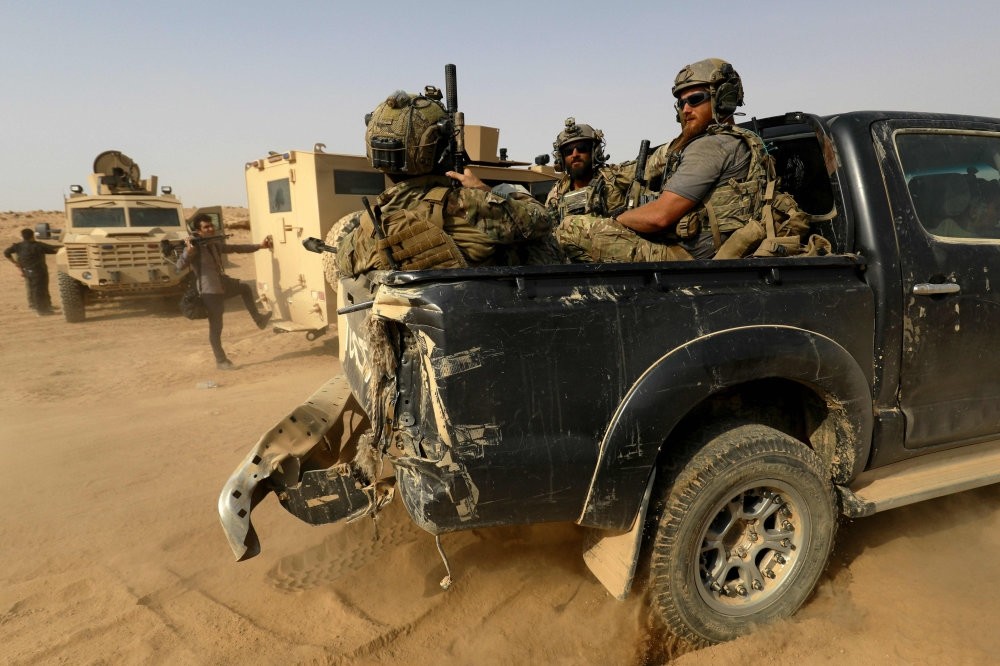 For Turkey, the division of Syria into three areas and a proxy terrorist group gaining statehood in the north is not an option. Preserving the country's united structure is the most natural, reasonable, rational and ethical solution for Syrians

Washington has made successive statements about the PKK and its Syrian affiliate, the People's Protection Units (YPG). These statements were followed by Turkey's responses. To begin with, news agencies reported that the U.S. launched joint patrols with the YPG in northern Syria. Concurrently, Turkish troops were responding to harassing fire from the border area. President Recep Tayyip Erdoğan, Foreign Minister Mevlüt Çavuşoğlu and various Turkish spokespeople repeatedly said that Turkey would not allow any fait accompli in northern Syria via the PKK and YPG. Perhaps an advantage, James Jeffrey, former U.S ambassador to Ankara, was appointed as U.S. Special Representative for Syria. Meanwhile, the U.S. put bounties on three PKK leaders.

Turkey said it viewed this move as a much belated yet positive step while voicing its concerns. Chief among them was the separation of the YPG from the PKK, with the U.S. turning the YPG into an army and making headway in this regard. According to Washington, the PKK is a terrorist organization, but the YPG is not. Turkey knows this ridiculous strategy will never work. Yet, the U.S. went ahead and built its strategy on this flimsy foundation. It was apparent from the very beginning that this foundation would collapse.

The bounty on the PKK leaders was interpreted as an effort to strengthen this frail foundation. Indeed, Jeffrey said in a statement a day later, "We do not define the YPG as a terrorist organization." Thus, Ankara's prediction came true. In other words, there is nothing new on the eastern front, or maybe there is, but it is impossible to discern at the moment.

Erdoğan's recent messages about a possible operation east of Euphrates are clear. The only thing that can prevent it is the immediate implementation of the Manbij deal, which would restore lost confidence. The next step would be to implement the same model east of Euphrates as well. In fact, Ankara's participation in this strategy is an indication of Turkey's well-intentioned effort to repair ties with the U.S.

For this to occur, however, the U.S. needs to abandon its YPG-based strategies that have no basis in real life or on the ground. The most toxic issue in bilateral relations is the continuing U.S. cooperation with the YPG, the Syrian offshoot of the terrorist organization founded by jailed PKK leader Abdullah Öcalan. For decades, the PKK has been managed from the group's base in the Qandil mountains and carrying out terrorist attacks against Turkey, a NATO ally.

Of course, there are major differences between the Syrian policies of the two countries. Turkey has defended Syria's territorial integrity from the outset. It wants self-determination for Syrians in a free, democratic atmosphere. With the help of coalition forces, this vexed problem could be solved for good. For Turkey, the division of Syria into three areas and a proxy terrorist group gaining statehood in the north is not an option. Preserving the country's united structure is the most natural, reasonable, rational and ethical solution for Syrians.

Encouraging a permanent division of Syria would not only prolong and normalize the civil war but also perpetuate ethnic and sectarian conflicts. In reality, many world powers want the conflict to continue. This divisive strategy may have been chosen for Israel's security, but it would be another big mistake. That a two-state solution for the Palestine issue has completely dropped off the agenda indicates that efforts toward a different regional design are gaining momentum. No one is claiming that Israel's security is irrelevant. Ankara has demonstrated that it is ready to contribute and help with peace processes, especially in Palestine.

However, major divergences in the region over both Syria and Palestine and other thorny issues make a solution impossible. Valuable lessons from a past that unfolded in extremely painful ways seem to have been cast aside. Painful political and demographic changes unleashed by the Arab Spring appear to have rendered the experiences irrelevant. Changes in the attitudes of Egypt, Saudi Arabia and the United Arab Emirates (UAE) have led Israel to think it can devise different formulas like moving Palestine and forming a Palestinian state in Sinai.

At that point, Turkey's principled approaches that insist on experience draw reactions. Even in the U.S., Jewish intellectuals who argue for a two-state solution are met with harsh criticism. Amos Elon does not exist anymore; nor does Tony Judt.

How correct it is to let Syria go through a prolonged and bloody civil war first, with deep distrust among social groups forming, and then say, "This country cannot stay united anymore?" Legitimization of the YPG is an indication of that mentality. Similarly, is it not a contradiction to wait so eagerly for the Muslim Brotherhood in Egypt to get marginalized and designated as a terrorist group after being toppled through a brutal military coup? The same is true for Hamas. While there is an effort to legitimize the PKK/YPG, there are also attempts to marginalize political movements.

Turkey would never consent to Kurdish people living in inhumane conditions in Syria, Iraq or Iran, with their rights of representation denied. In fact, Ankara has launched comprehensive democratic initiatives at home to prevent such situations. It would be unjust to compare the welfare of Turkey's Kurds with those in those three countries. President Erdoğan has taken numerous democratic steps in this regard and if the reconciliation process had not been poisoned, conditions would have been almost ready for the PKK to lay down its arms. Erdoğan said in a recent speech at his party's parliamentary group meeting: "I am a Turk but not a Turkist. If I practice Turkism, then my Kurdish brother will be entitled to Kurdism," showing that despite all the bloody efforts by the PKK and its supporters, this determination is still there.

To sum up, Turkey has developed the sanest approaches to the Palestine issue, Israel's security concerns, a peaceful a transition in Syria and for the plight of Kurds in the region. This is the greatest guarantee for Europe's security, the global leadership of the U.S. and the peace for all in the region. The recent Istanbul summit showed that Germany and France have also taken this stance. We are only a step away from restoring peace in Syria, eliminating radical groups and initiating a hopeful process in the Middle East, if the U.S. removes its roadblocks.

As I always say, the world is not a bed of roses. Romantic and unrealistic approaches have no place in politics, but it is equally necessary to not discredit peaceful and balanced solutions as fancy. A two-state solution in Palestine, the territorial integrity of Syria and the promotion of civil politics in the Middle East should come to the fore again. Besides, I see that the peoples' preferences on all these issues are also inclined in this direction. The region is ready, more than ever, for ethical and realistic solutions. Every side must be willing to consider lessons from past mistakes made.

Surely, the democratic health of the U.S. is the most influential factor in the world. When the U.S. sneezes, the rest of the world catches a cold. The self-confident, moral and democratic leadership of the U.S. is needed worldwide. The U.S. duly fulfilled this mission during World War II by assuming responsibility and won moral legitimacy for global leadership. Now, we see this legitimacy being eroded. Committed enemies of the U.S. and radical groups are overjoyed, but responsible parties cannot risk a collapse. The U.S. losing legitimacy amid so much technological, military and economic dominance would be bad news for the world. And only the U.S. public, its democratic institutions, politics and media can prevent this.

With that, I am not addressing a specific political actor in the U.S. The current president, the new Congress or whoever comes to power in 2020 will and should face these problems head-on.

After all, we are seeking a new balance that everyone can accept. Its widespread acceptance will determine its duration as well.