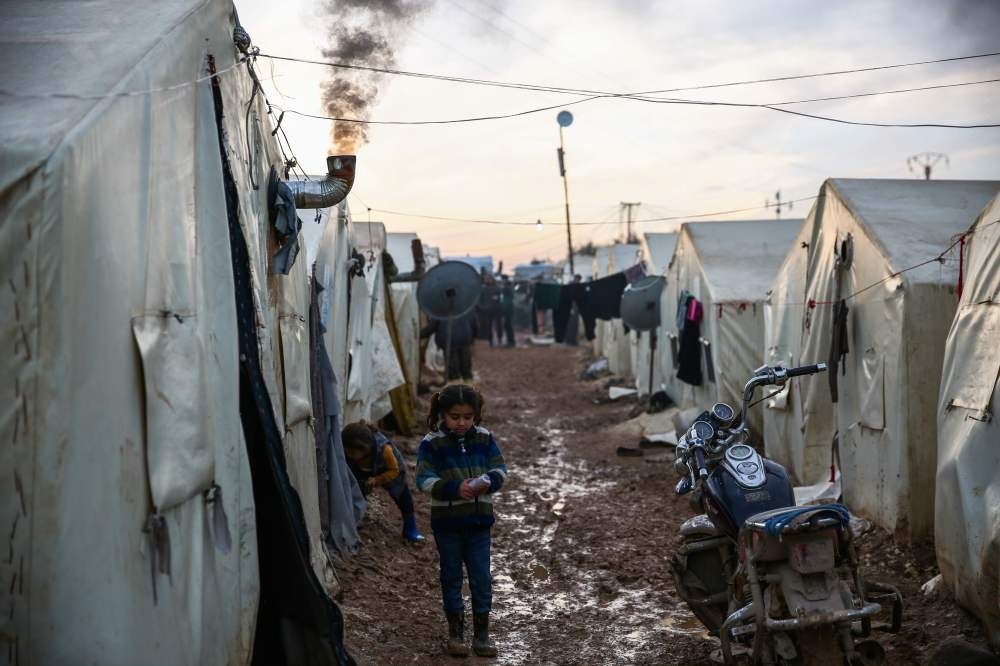 A Syrian girl stands in the mud outside a tent at a camp for the displaced near the village of Shamarin, near the border with Turkey in the northern Aleppo province, Jan. 11.
by Maria Beat Jan 18, 2019 12:00 am

The safe return of Syrian refugees can be provided with the formation of a safe zone, as recently agreed by Presidents Erdoğan and Trump

Filled with death and destruction, war and hostility have made millions of civilians homeless and forced them to seek refuge in strange, distant lands. A great many of them never get a chance to return, and their offspring grow up in foreign countries without a bond with native traditions, culture or often language.

We call these people refugees or migrants without thinking that displaced civilians seeking shelter far from home have become a common phenomenon nowadays. A full and absolute clarity still waits to be given by international agencies and the United Nations particularly on what is meant by the term "refugee" or "migrant." Lack of it makes the plight of those seeking shelter and asylum dire, their status obscure and protection procedures varying on a case-by-case basis.

With the war in Syria in its eighth year and the influx of refugees still ongoing, the EU continues trying without success to get its members to agree on migration issues and draw a long-term plan on how to manage the inflow. As a result, a crisis erupts every time a boat with asylum seekers from Africa or the Middle East arrives on Europe's doorstep. The most recent example this January has become the case of 49 migrants rescued by nongovernmental organization (NGO) boats in the Mediterranean but stranded at sea for no less than three weeks, while a handful of EU countries were arguing which of them would let the passengers disembark.

The Arab Spring, the fall of regimes in the Middle East and the civil war in Syria have brought chaos and degradation of living conditions that prompted a massive inflow of migrants to Europe and created a worst refugee crisis in the world, according to the United Nations. Its disclosed data reveals that some 7 million Syrians are displaced internally today, while 5 million have found refuge in foreign countries.

Turkey, Syria's immediate neighbor, has given shelter to more than 3.5 million refugees, the highest number of displaced persons hosted today by any country of the world. Syria's other neighbors, Lebanon, Jordan and Iraq host 1.5 million, 670,000 and 250,000 people, respectively. Germany, the largest EU economy, hosts 600,000 Syrians, which is by far the highest number of refugees accommodated in continental Europe.

The EU appeared unprepared to and helpless before the growing influx of refugees and, in the effort to ease the migration pressure, in March 2016 it made an agreement with Turkey that became known as the refugee deal. It's envisaged inter alia that the EU would send back to Turkey all Syrians who reached the Greek islands illegally after March 20, 2016, while accepting the legal arrivals. As of 2018, Germany has received 5,500 migrants from Turkey, from the Netherlands close to 3,000 and from France around 2,000 due to the high bureaucracy and red tape in Greece.

For Turkey, the deal has, in return, envisaged an opening of a visa-free entrance to the EU for Turkish nationals, a topic that instantly became the subject of continuous reservations and is still waiting to be implemented. The deal's financial part has also run into difficulties, and Turkey continues waiting for its effort full remuneration in line with the terms.

Since 2011, Turkey has received a constant inflow of displaced Syrians fleeing conflict. Nearly half a million of them came from the areas controlled by the People's Protection Units (YPG), and half of them were Kurds. The number of refugees may well exceed 5 million by 2028, and Turkey has spent more than $32 billion from its national budget on their accommodation and integration. More than 95 percent reside in urban centers and at least 560,000 refugees are registered in Istanbul.

They are assisted with adaption by municipalities and civil society groups and, in no small part, it results from the commitment of the Turkish government to meet the protection needs of the Syrian refugees. To ease their integration into society, authorities run professional upgrading and retraining programs to help the refugees find employment, provide for the family and eventually become self-sufficient. Nearly 500,000 Syrian children are enrolled in Turkey's public education system now, according to UNICEF, and another 230,000 study at accredited education centers providing curricula in Arabic.

The core of the programs is the financial support combined with elementary and vocational training, and social behavior skills that ensure the success of a Turkish system of integration. It's different from practices of the EU countries largely focused on mere health assistance and language support, food and clothes, and temporary shelter leaving the migrants out of the social medium of the hosting country. This often prompts the newly arrived to seek affiliation with paralegal associations and results in their radicalization and involvement in criminal activities. France and Germany make quite an example in this regard.

A broader scaled Turkish practice ensures safety from outbursts of ethnic conflicts, public looting, vandalism and social misbehavior witnessed in the EU countries and generating antagonism of locals toward the refugees in certain parts of Germany, France and Greece.

The end of exile

Turkey plays an important role in resolving the refugees' crisis by hosting a large number of displaced persons, while facing the challenges that come with doing so. While emphasizing religious and cultural affinities with the Syrian refugees, the Turkish government adheres to the position that "they will not stay here forever," as President Recep Tayyip Erdoğan has said, while adding that "to help Syrian refugees return to their homes" is in part an aim of the Turkish operations in northern Syria. "We know that many Syrian refugees in Turkey want to return home if a secure environment is established in their region of origin," elaborates Yasin Aktay, a chief adviser to Erdoğan, "however, others prefer to stay in Turkey until the whole country is secured."

In May 2017, Turkey jointly signed the Astana peace process with fellow guarantors, Russia and Iran, a memorandum on the zones of de-escalation in Syria that envisages inter alia an "establishing of suitable conditions for repatriation of refugees." As a follow-up, representatives of the International Committee of the Red Cross (ICRC) and the United Nations refugee agency, UNHCR, took part in the Astana round of talks in November 2018.

According to Russian sources, more than 600,000 displaced Syrians have returned home, largely to Aleppo, starting in 2017. Around 85 percent of them moved back from temporary locations in safer parts of Syria, while the rest came from Lebanon, Jordan, Turkey and Iraq. Up to 1.5 million more displaced Syrians may be expected to return from abroad in the near future. The Syrian regime claims to be ready to host up to 330,000 repatriates by providing accommodation in 75 towns and settlements in the regions relatively undamaged by the hostilities. In August 2018, the Russian Defense Ministry announced a launch in Syria of a coordinating center to assist the refugees with repatriation. "If we help to those coming back home, the migration pressure on the EU countries may go down," said Russian President Vladimir Putin when meeting with U.S. President Donald Trump in Helsinki on July 16, 2018.

Since March 2017, following the completion of Operation Euphrates Shield, 140,000 Syrian refugees have returned home from Turkey. Still, the mass repatriation is hardly possible without Syria's reconstruction, requiring enormous effort. By some estimates, $400 billion will be needed to rebuild postwar Syria, and the Western community is reluctant to allocate the funds before a new constitution is adopted and a democratically elected government takes office. Though both are on the international agenda, the process is slow and impeded by the still ongoing hostilities in certain parts of Syria. Still repatriation to the liberated regions continues and is about to gain increasing momentum.

In the meantime, Syria's reconstruction is hardly a priority for the U.N., which concentrates its effort on political settlement in Syria. In turn, the U.S. doesn't consider the current situation in Syria favorable for the refugees' return.

As for the EU, it's openly reluctant to help Syria with reconstruction until assurance is given that democratic elections will be held. Still, some countries are concerned that further hostilities will drive more refugees to the continent and are ready to soften their position.

Russia considers the U.S. position on the refugees return "destructive," as Russian Foreign Minister Sergey Lavrov mentioned last August, and sees its refusal to engage in the Syrian infrastructure reconstruction as an "attempt to impede by force the repatriation of Syrians." In the meantime, Lebanon is currently hosting more than 1.5 million refugees and supports a speedy repatriation of Syrians unconditional of the Syrian political settlement, according to its Foreign Minister Gebran Bassil.

The establishment of a safe zone in northern Syria, that Erdoğan announced on Dec. 15 and as agreed upon with Trump, would further foster the refugees' return to the liberated regions, Turkey believes.