Algerian protests: A second wave of the Arab Spring? 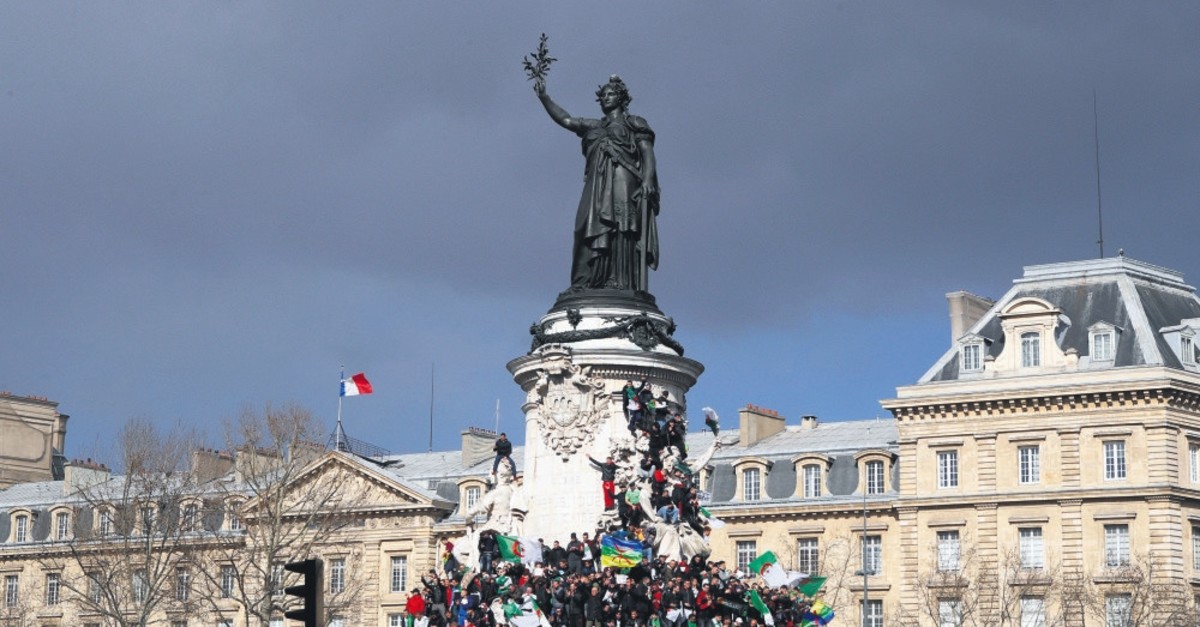 Demonstrators stage a protest to denounce President Abdelaziz Bouteflika's bid for a fifth term at the Place de la Ru00e9publique in Paris, March 10, 2019.
by Ali Abo Rezeg Mar 18, 2019 12:09 am

The protests growing in Algeria should serve as a trigger to change the Arab peoples' declining economic, political and social conditions

Hundreds of thousands of Algerians in several provinces of the country are still taking to the streets to demand that their overaged President Abdelaziz Bouteflika does not enter the upcoming elections set to take place in April this year.

Bouteflika, who has been governing Algeria since 1999, reportedly suffered a stroke which made him, for months, unable to communicate with his own people. Even the announcement of his intention to rerun in the presidential race came via a letter handed over by his aide after he was not able to deliver a usual speech to his nationals.

Footage showed young Algerian men, women, elderly people and children taking part in the protests along with politicians and renowned figures. A handful of Algerian veteran fighters, who took part in the Algerian liberation movement against the French colonizers, were also seen participating in the protests, most notably, Algerian female icon Jamila Bohayrid.

Some commentators argued that these protests – coinciding with the months-long Sudanese protests – have constituted a second wave of the Arab Spring.

However, being a second or a third wave of the Arab Spring should not be the main ground for discussion while analyzing the Algerian protests or even the Sudanese ones. What matters here, as far as I see, is whether these protests have something to do with the ideas and principles of the Arab Spring, or most specifically, the belief in peaceful change as the only means to improve the Arab masses' economic, political and social conditions.

Since the early stages of the Arab Spring, Arab dictators have been adopting policies not only aimed at suppressing the civil and peaceful protests but to deter the Arab youth to not even take it as a way to achieve the long-awaited for change. This led to the death of hundreds of thousands of people in Syria, Yemen, Libya and Egypt.

By taking to the streets, the Algerian people sent a loud message that they have yet to be deterred by the atrocities committed by these regimes. They also asserted that these regimes and their "deep state" establishments bear the full responsibility for turning these peaceful protests into civil wars after not wisely responding to the demands for change.

Another indicator that the Algerian protests are consistent with the Arab Spring is that the demands of Algerian protesters were not focused on alleviating poverty or increasing employment. This demonstrates that hunger is not the most critical reason that sparks revolutions in the Arab world, where people there have been thirsty for democracy and the rule of law.

It was true that "bread" was a part of the main slogan Egyptians were chanting during their protests in early 2011, but, at the same time, they were calling for freedom and social justice. It was the same with Libya and Syria, whose peoples were had good standards of living before the outbreak of their revolutions.

The Algerian people's demands have also been focused on living a free and dignified life in a country that cares about their rights; most specifically, the right to political participation. Another important dynamic is on display when the Algerian people felt that the current regime has become very disrespectful to their national spirit and political awareness. This was seen in the regime's insistence on the candidacy of a man essentially on his deathbed; something Algeria's former Prime Minister Ali Benflis called "an insult" to Algerians.

It was the same disrespect Hosni Mubarak showed Egyptians when his men led the fraud campaign in the latest elections conducted months before the revolution. The same disrespect Moammar Gadhafi showed when he told Libyans in a speech, "Who are you to rise up against me?," and the same disrespectww that Bashar Assad's regime showed after massacring a child for writing a pro-freedom word on a wall in Daraa province.