Turbulence continues to spread in Georgia 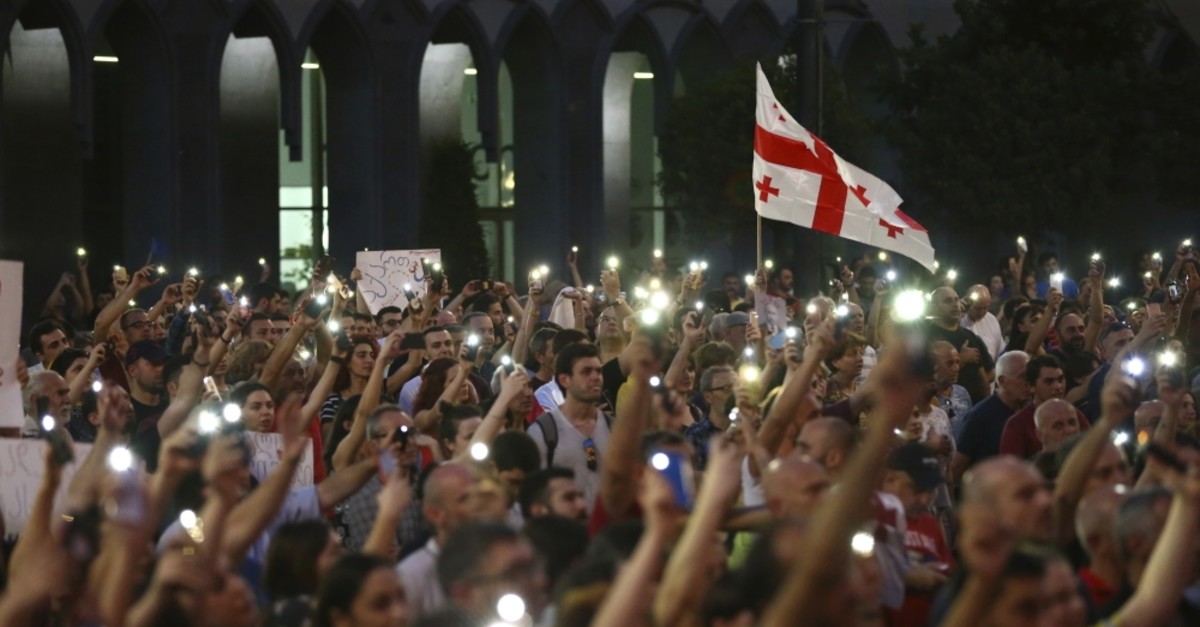 Opposition demonstrators with a Georgian national flag gather outside the Georgian Parliament building in Tbilisi, Georgia, June 23, 2019.
by Maria Beat
Jun 27, 2019 12:19 am

The turmoil in Georgia is a crisis of the ruling power flavored with anti-Russia sentiments. It's revealed that the people of Georgia are far from happy about how their country is ruled and how the national elections are held, and that they remember very well that 20 percent of Georgian territory, lost a decade ago, is the result of its war with Russia.

During the 10 years since the 2008 military conflict, Russia-Georgia relations have remained strained, while tourism exchanges and exports to Russia of Georgian wines and mineral water got a boost. Official contacts have recently started to resume as well through diplomatic channels particularly. All were the promising signs of a coming warm-up of Russia-Georgia relations.

However, suddenly, after hardly having improved, relations experienced a major setback that sent them to the lowest possible level after the 2008 military conflict. On June 20, a Russian parliamentarian, attending a meeting of the Interparliamentary Assembly on Orthodoxy (IAO) as its president, took, by invitation of the Georgian side, a chair position at the Georgian Parliament.

It instantly instigated massive indignation and sparked violent anti-Russian protests in Tbilisi. Their instant outburst and intensity plunged the ruling regime into shock and forced the resignation of Parliament Speaker Irakli Kobakhidze the next day, the very person who initiated the meeting in Tbilisi under the chairmanship of a Russian national, the IAO president.

Sparked as anti-Russian protests, the unrest boosted the long-brewing discontent with the ruling power and quickly turned into a massive action of civil disobedience. "It's a conflict between a citizen and the ruling power, and it's the citizen who is to gain victory eventually," said Grigol Vashadze, the Georgian opposition leader and its nominee at the 2018 presidential elections.

After a violent night on June 20 when police resorted to tear gas and rubber bullets to disperse crowds, unrest continued but with less violence. Protesters demanded a change in the elections system from the outdated mixed majoritarian-proportional into the party-list voting – better meeting today's realities. Moreover, they demanded the resignation of Giorgi Gakharia, an all-powerful Interior Minister blamed for the brutal suppression of the protests on June 20.

Finally, on June 24, unable to restore order for several days, the government succumbed to protesters demands for a switch in the party-list voting system, while ex-Prime Minister Georgi Kvirikashvili voiced his support that the protesters' demands be fully met. The protesters have won the battle, but not in full: Giorgi Gakharia didn't resign, and protests continue.

Wars leave deep wounds that are not easy to heal, and the 2008 Georgia-Russia conflict is an example. The territorial loss Georgia suffered remains an irreplaceable damage for the country that keeps dumping its blame on Russia and calling it an "aggressor country."

On a personal basis, relations between the people of Russia and Georgia remain friendly and immune to political interstate squabbles. Recently, Georgia has turned into a major tourism destination for the Russians thanks to its traditional hospitality, picturesque scenery coupled with inexpensive and quality accommodation, tasty food and cheap wine. In 2018, nearly 1.5 million Russians visited Georgia as tourists which is 12 percent more than in 2017. In the first quarter of 2019, their influx has grown by 25 percent in comparison to the same period of 2018. In 2018, according to Georgian statistics, Russian tourists have spent 632 million euros compared with 279 million euros spent by EU nationals.

After years of imposed embargo, Russia has finally opened its market for Georgian wines and their sales average around 10–12 million bottles a year to account for 1 percent of the market. Another export item is Borjomi spring water that became the Russian market leader in 2017 with sales turnover reaching 190 billion rubles. The controlling stake in the Borjomi company belongs to business affiliates of Russia's all-powerful Alfa Group.

At the country level, Russia has recently softened its hostile rhetoric toward Georgia in an apparent attempt to civilize relations with a neighboring country. A meeting of the countries' deputy foreign ministers has taken place, while last winter there were hopes about a potential gas contract to be signed between Gazprom and Georgia's authorities. Russia's mass media has started giving balanced coverage of events in Georgia and stopped portraying ex-president Mikheil Saakashvili as an imbecile good for nothing but chewing his tie.

Nevertheless, when parliamentarian Sergei Gavrilov, a Russian communist and the IOA president, took the place of the Georgian Parliament Speaker to chair the assembly meeting – the very place from which Georgian independence was once proclaimed – his action provoked a powerful outburst of violent anti-Russian protests ranging with hysteria. While acting in line with the IOA rules of procedure and in order to carry its scheduled meeting, the Russian parliamentarian unintentionally sparked the worst public unrest in Georgia in years.

Disorganized and spontaneous, the protests have shortly transformed into action against the ruling power and the national agenda outweighed the anti-Russia sentiments by bringing into focus the long-awaited decisions on issues kept on standby by the party in power.

The impotence of power

The image of a nation leader fades easily when progress slows down and the future stops looking bright. This is what's been going on in Georgia for the last couple of years, while the Georgian Dream party government has increasingly been losing its popularity and mass support.

Having come to power on the wave of public discontent with the policies of the Saakashvili government and bright hopes the people of Georgia associated with them, the Georgian Dream party has largely failed to deliver on their election promises and meet the expectations of its electorate. The growing discontent revealed itself in the course of the autumn 2018 presidential elections when the Georgian Dream, the party in power, nearly lost to the candidate of the opposition block in the first round. Having miraculously recovered, it gained a victory in the second one and brought to office, as the country president, its candidate Salome Zhurabishvili to enjoy nevertheless a rather ceremonial authority curtailed in line with the newly introduced modifications into the Georgian constitution. According to them, the actual power in the country is now in the hands of the prime minister and the government. Their ability to cool down public unrest has currently revealed itself as questionable.

As of now, the protests continue and their main place of action is the square in front of the parliament that brings together in the evening thousands of young activists from various nongovernmental organizations and university students. Hardly politically motivated originally, these people have eventually become a factor of Georgia's political life and enjoy, by now, clear support of Georgia's opposition.

In the meantime, confusion is apparent within the close circle of oligarch Bidzina Ivanishvili, the Georgian informal ruler. One of his close supporters, Kaha Kaladze, the mayor of Tbilisi and a former player of the Milan football club, has publicly admitted that they made a "terrible mistake" by inviting to Georgia, Russian parliamentarian Gavrilov, while ex-Prime Minister Georgi Kvirikashvili, once a top-manager of the Ivanishvili financial empire, has called on the ruling authorities to meet the protesters' demands including early elections in the parliament.

By now, the protesters' demands have been partially met, and the next elections are vowed to be held by the party lists exclusively to ensure a multi-party presence at the next Georgian Parliament. An introduced zero threshold is no less important as well. It ensures that some 10-15 parties will be represented in the next parliament to make coalitions and establishing de facto a multi-party democracy and a coalition government.

For the young Georgian democracy this is a major gain and the country people have been striving for it for years. Weird as it is, the long-awaited compromise on reforming the election system has finally occurred by the impact of an outburst of the anti-Russian hysteria provoked by the incident at the Georgian Parliament. Still, it's early to consider the crisis resolved, and the protesters continue while the interior minister remains in office.

Russia enjoys a reputation of being tough when its security is concerned. It's considered the act of physical abuse of its citizen, communist and orthodox parliamentarian Gavrilov, as hostility and aggression and the outburst of the anti-Russian sentiments as an insult. President Putin instantly signed a ban, effective from July 8, on-air communication with Georgia by the Russian and Georgian carriers, while the travel agencies were recommended to "abstain" from selling their tours to Georgia under the pretext of concern over the Russian citizens' security.

The unfortunate development shocked the Russian establishment while revealing once again that close and fiduciary relations get ruined easily but recover slowly and painfully.