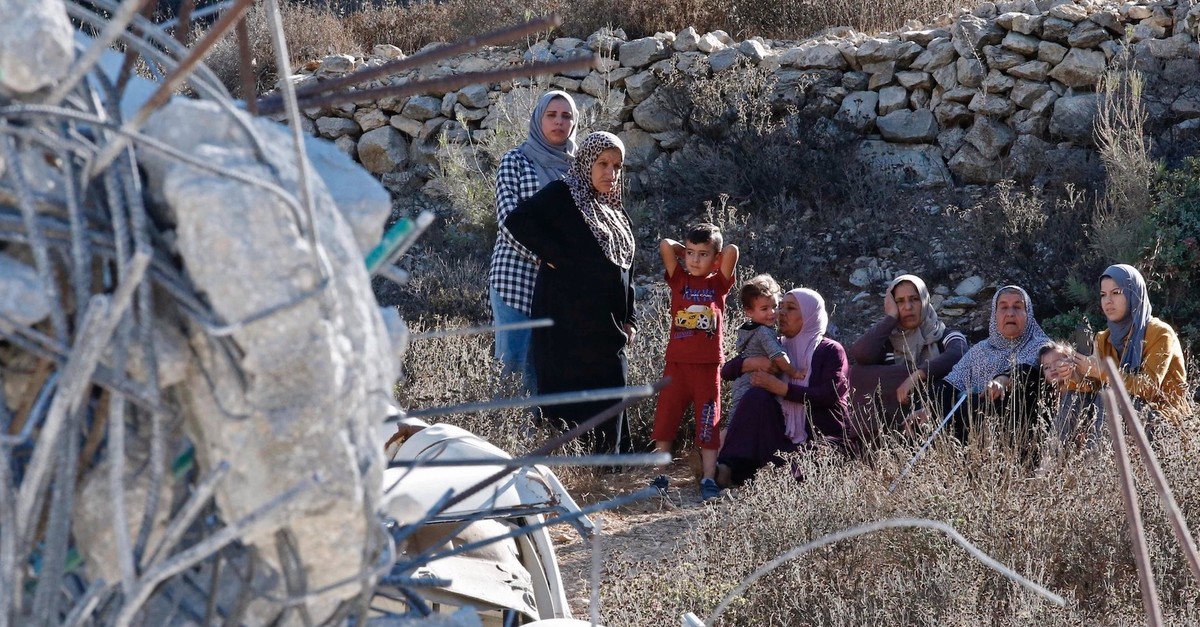 Palestinian women look at the rubble of the house of a Palestinian family after it was demolished by Israeli authorities in the Israeli-occupied West Bank, Oct. 3, 2019.
by Najla M. Shahwan Oct 09, 2019 2:06 am

A week before the Israeli elections, Israeli Prime Minister Benjamin Netanyahu made a speech as a last-minute election pledge – a "historic move" perfectly designed to win more right-wing voters promising the Israelis to apply Israeli sovereignty over the Jordan Valley and the northern Dead Sea.

Netanyahu, standing in front of a blue-shaded territory map, called it a "one-time opportunity" to redesign Israel's borders and promote the right wing's plan for a "Greater Israel," with support from Washington.

Netanyahu added that other Israeli settlements will follow if his Likud party emerges victorious after the Sept. 17 elections.

These recent statements of annexation reflect the real policy of the Israeli right-wing and the religious parties who were calling for settlement expansions and the annexation of all the settlements in the West Bank.

This move violates international law and these plans are contrary to the Oslo Accords as the annexation of the settlements will sweep the West Bank, preventing a Palestinian territorial continuum needed to reach a mutually agreed-upon two-state solution in the future.

Crisis in the Jordan Valley

The Jordan Valley comprises 30% of the West Bank area in the Palestinian territories – stretching from the Dead Sea in the south to Bisan in the north, from Jordan in the east to the West Bank hills.

Of the total valley surface of 2,400 square kilometers, approximately 1,200 square kilometers are controlled by Israeli settlements. Some 46% of the land has been annexed as military occupation zones, and only around 4% of the valley remains accessible to Palestinians for agriculture.

Around 65,000 Palestinians and about 11,000 illegal Israeli settlers live in this area, which is referred to as Area C. Most settlement areas are currently around Jericho as well as in 24 Bedouin townships and villages.

The Jordan Valley has the potential to play a vital role in the Palestinian economic development, as it is a major component of a viable future Palestinian state. This unique area offers opportunities in nearly all major economic sectors and has comparative advantages in the fields of agriculture, tourism, transportation, logistics and potential for industrial and agribusiness development as well.

Moreover, the Jordan Valley is the only large region of the Palestinian territories not densely populated; therefore, it will support the substantial urban development, including new cities, necessary to sustain large-scale absorption of population growth.

Since 1967, Israel has devised and implemented systematic and strict measures aimed at ensuring absolute control over the region, isolating it from the rest of the West Bank.

Israel seized vast swaths of fertile agricultural lands in Jordan Valley to be used by Jewish settlements, thereby depriving Palestinian farmers from the right to make use of their own lands.

Besides, Israel uses a closure system that restricts movement in and out of Jordan Valley and these measures have a significant impact on the livelihoods of Palestinian farmers who live and cultivate their lands in this area.

Palestinians are under the jurisdiction of the Israeli Civil Administration for planning and permit purposes. In 70% of Area C, Palestinian building is entirely forbidden and in the remaining 30%, construction is theoretically possible but getting building permit is practically impossible.

Palestinians can build freely only on 1% of Area C – most of which is already built over. Due to the severe Israeli restrictions, Palestinians have no choice but to build without permits, which led to the demolitions of around 698 residential units from January 2006 through September 2017.

The demolished structures were home to at least 2,948 Palestinians. From January 2012 through September 2017, 806 nonresidential units, including agricultural structures, were also demolished.

This land is highly fertile and rich in natural resources as it benefits from a warm and year-round tropical climate and is suitable for growing diverse agricultural products.

Most importantly the region has the capacity to provide the regional and international market with off-season agricultural products on a large scale. Furthermore, the Dead Sea could provide opportunities for many industries based on valuable mineral extraction such as saline elements, phosphate, magnesium, sodium, calcium and bromide.

Israel exploits almost all of Jordan Valley and the northern Dead Sea for its own needs and adopts hard measures as an overall goal to tighten Israel's grip over the valley and further the de-facto annexation of this area to Israel's sovereign territory while exploiting its resources.

Israeli politicians have made it clear on several occasions that the strategic valley would remain under their control no matter what.

To justify its occupation of this area, Israel claims that it is vital to its security; however, in reality, it is an economic treasure stolen from the Palestinians starting in 1967.

A report by the World Bank calculated that the Palestinian economy would be boosted by $918 million a year if it could exploit Dead Sea minerals in the southern Jordan Valley, and a further $704 million a year could be added if it had more access to farmland and water fully controlled by Israel.

It seems Netanyahu's irresponsibility is pushing him to do anything for his political survival, including extinguishing Palestinian rights, the prospect for peace and prior agreements.