Why do Armenians insist on calling it genocide? 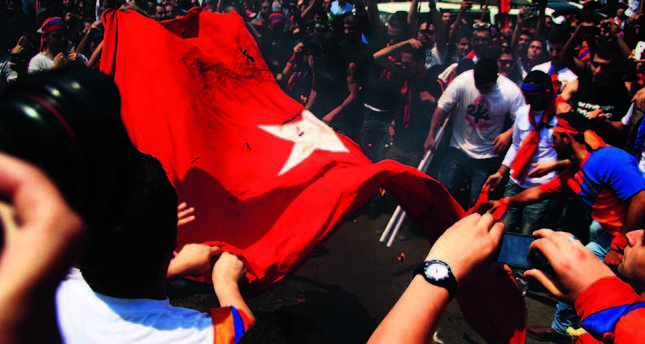 Genocide became the cement of the Armenian diaspora's identity. It became the diaspora's homeland, a new space in which imagined victims take refuge in defining who they are by determining whom they are against

Armenians originally termed the events of 1915 "aghed," (catastrophe) or "yeghern" (pogrom), while some scholars have also used "darakrutiun" (deportation) and "aksor" (exile). After 1965, due to a number of reasons, especially the concerted efforts of the Soviet Union, the Armenian diaspora under the leadership of the Armenian Revolutionary Federation (ARF), redefined the events of 1915 as genocide.

Some Armenians insisted on the redefinition of the events as genocide, while some extremists committed high-profile terrorist attacks and assassinations of Turkish diplomats. Along with aggressive lobbying toward the recognition of events as genocide, Armenians narrowed their own options of reconciliation but provided a new arsenal for outside forces to be used as leverage against Turkey and Armenians at the same time.

Those countries that want Turkey to do something for them play the "genocide card." As a consequence, the Armenian issue has become an international bargaining chip. The European Union countries and especially the U.S. use the "recognition issue" to get concessions on a number of matters. If the Armenians did not frame the issue within the concept of genocide but rather within aghed, there might have been much better prospects for reconciliation between the two sides.

For instance, it was possible, but not easy, to bring some Turkish intellectuals together around the concept of the Great Catastrophe to organize an online apology for the mass killings of Armenians during World War I.

Many of these intellectuals would not have signed on if it was framed as genocide. This indicates that the word genocide stops all kinds of dialogue.

In other words, the term genocide leads to a prosecutorial tone of accusation against the Turks, where as catastrophe opens more room for contemplating what happened. Marc Nichamian, a French-Armenian scholar, offers a powerful argument about the negative implications of this shift from "catastrophe" to "genocide."

He says, "We have to prove that it is genocide. But the opposite is true as well, and that is what is terrible. It was genocide, and we need to prove it for that reason. We need to enter into the endless game of proving it... There is not genocide without denial. More than that, the essence of genocide is denial."

In fact, this shift did not help reconciliation but rather further radicalized historiographies, and genocide became the refuge of the contemporary Armenian identity.

The paradox of the situation is that as a result of genocide, Armenian identity becomes dependent on the politics of the Turkish side. It constantly requires recognition from its "enemy," the Turks. When that recognition is not forthcoming it consumes all the energy and resources of the community. Since the Turkish state and many scholars reject the depiction of the events of 1915 as genocide, it deepens anxiety and leads to a crisis in the definition of being an Armenian. Why did this shift in terminology take place? Why do Armenians today insist on the recognition of their sufferings as genocide but nothing else? Genocide allows scholars to read causes of the 1915 events from their consequences. It turns the historical debate into a moralist narrative that seeks to rewrite the chain of events according to a predetermined concept.

Memory is situated in emotion and solidarity. The Armenian memory of 1915 hinges largely on a trauma that is represented as genocide.

Trauma survives, restructures itself, and becomes the core of identity through memory. Armenians seek to express their loyalty, anxiety, and rage in terms of genocide. Genocide captures all these diverse feelings while providing an essential social glue to establish the borders of Armenian nationalism and unite the Armenian people. Yet, they carefully avoid facing or discussing the decision of the Armenian elite to collaborate with Russia. Genocide as a cover The Armenian diaspora insists on the use of genocide alone to describe what happened. In a sense, the study of WWI and the entire Armenian history in the Ottoman Empire is reduced to the concept of genocide.

Why is this the case? First, genocide keeps emotions in the debate and especially solidifies a genocide-centric Armenian identity. In other words, genocide marshals powerful emotions among Armenians to form powerful political bonds and create a sense of community.

Genocide becomes the cement of the Armenian diaspora identity. According to a prominent Armenian scholar, genocide is a new religion for Armenians and there is a competition for the position of high priest in this new faith. It becomes a diaspora homeland, a new space in which imagined victims take refuge in defining who they are by determining who they are against.

It projects a unified victim group (Armenians) under the guise of genocide and prevents Armenians from acknowledging their own history by ignoring internal diversity and intra-power struggle within the Armenian communities, while at the same time reducing hostility among Armenian political parties.

For instance, the ARF, which was established in 1890 in Tbilisi and still dominates the diaspora with its nongovernmental structure, is a political-communal organization that went through several transmutations and used the genocide discourse for a number of reasons. It hid successfully behind the politics of the genocide debate to avoid facing its own past, especially its close political cooperation with the Committee of Union and Progress (CUP). ARF also sought to control the various Armenian communities under the genocide banner and to police the intellectual debate on genocide and the history of the Armenian community in the Ottoman Empire. It also transformed itself into a secular church to protect and perpetuate genocide as a new religion. Those who would deviate from the ARF version of history were and are disciplined through excommunication.

Second, genocide homogenizes the Armenians as victim and the Turks as perpetrators. Genocide also privileges victims' memory and ignores the memory and suffering of Turks. It allows Armenians to attract the sympathy of world public opinion by claiming a unique victimhood. This also forces scholars who disagree with the Armenian genocide narrative to become more careful in developing counter arguments so as not to be treated as denialists. In other words, genocide censors and sanitizes the counter argument and morality rests with the accuser.

Third, genocide allows Armenians to use anti-Islamic and anti-Turkish images and consolidate the image of the "terrible Turk" or "bloody Turk." It uses Islamophobia along with Turcophobia to dehumanize the Turks as a "genocidal people." It justifies not only Armenian violence against Turkish diplomats but also the occupation of one-fifth of the territory of Azerbaijan, and the killing and ethnic cleansing of Azeri Turks from the Karabakh region. In fact, the Republic of Armenia further invested in the cause of genocide in order to mobilize diaspora communities to justify its ethnic cleansing of Azeri Turks.

By insisting on the label of genocide, the debate in fact radicalized some Armenian youths and morally armed them to use violence. The perception of being a victim inadvertently justifies and provides moral ground to become a victimizer. For instance, in the 1980s, the Armenian Secret Army for the Liberation of Armenia (ASALA) killed 46 Turkish diplomats, including several high-ranking ambassadors, to force Turkey to recognize the events of 1915 as genocide, pay reparations and cede territory for Armenia. These organized killings and several shock attacks, like the one at Orly Airport in Paris in 1983 that resulted in the killing of eight people and the attack on Esenboğa Airport in Ankara in 1982 that resulted in the killing of nine, brought the Armenian issue to the attention of the Turkish public within the context of terrorism. Indeed, before these attacks, the Turkish public had forgotten the events of 1915 and there was no debate about what happened to the Armenians in eastern Anatolia. In other words, forcing the Turkish state and the public to remember and face the history of 1915 through these high-level attacks helped to create a more defensive and dismissive literature about the events of 1915. The key term that was framed to discuss and remember what took place became "Ermeni Mezalimi" (Armenian atrocities).

In the centennial commemoration of WWI, the Armenians coin the ethnic cleansing of the Armenian communities from Anatolia genocide, while the Turkish collective memory appears to be different from that of the Armenians by glorifying the battles won and celebrating its triumphs while ignoring darker episodes during WWI. The Armenians, on the other hand, want to turn the centennial commemoration into a public mourning of what they lost. Unfortunately, there is very little hope to move beyond these two diametrically opposed narratives and build bridges between them.

Gerard Libaridian, the most thoughtful historian of the Armenian diaspora, aptly sums up the problems of both sides. He says, "The entrenched position of each side is now part of their [Armenians' and Turks'] respective identities, identities that not only define the boundaries of the ethno-cultural self-definitions but also the socio-political context within which they see their present and project the future." Indeed, there is very little hope if they do not free themselves from the cages of identities to understand what took place. Thus, neither of these identity-based narratives provides a satisfactory historical account that attempts to understand what happened and why.

*The longer version of this essay will be published in "Middle East Critique," June 2014). * Professor, the University of Utah