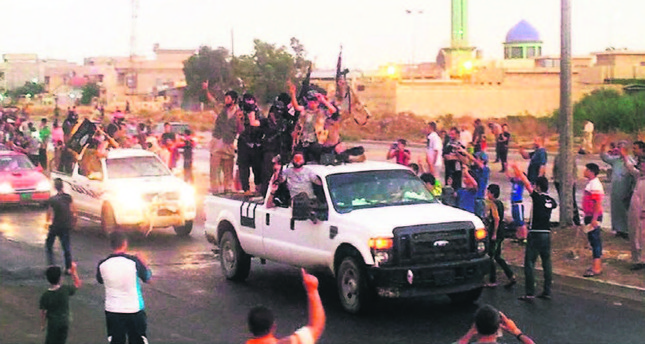 by Ceyhan Boya Jun 30, 2014 12:00 am
Last week some Turkish media organs showed a picture of ISIS fighters, next to whom were the flags of the numerous countries they came from, exposing the significant number of European nationals among its ranks. According to these reports, this was clear evidence that ISIS was indeed the pawn of foreign powers and that these young European men were agents of their states tasked with further destabilizing the region.

There is no denying that ISIS, and other violent organizations, are being used by a number of states, in what is referred to as the "regional balance of power" in international relations. The abundance of crude oil in the Middle East guarantees that the region will be a battlefield for rivalries between states, from West to East, all eager to protect and extend their own interests. In this global competition, we can safely assume that groups like ISIS are directly, and indirectly, funded and supported logistically by a range of countries, including Western ones. However, suggesting that its European fighters are agents of these states is a misreading of the situation and also neglects the developments relating to a number of second and third generation Muslims, including converts, in Europe.

The experience of Muslims in Europe differentiates itself from experiences in majority Muslim countries. The same can be said for countries such as the U.S., Canada and Australia. European Muslims originate from across the globe and are of different ethnicities. If Muslims, as an entire body, are considered a "minority," as is often done politically and in the media, this minority is a mosaic with many different pieces. The main thing gluing the different parts together is an overriding Muslim identity. Consequently, in the West, the milieu and the way in which Islam is experienced are also very different. Pakistanis, Algerians, Turks, Moroccans, Kurds, converts etc. find themselves living in the same neighborhoods, worshipping in the same mosques, joining the same Sufi fraternities, and sharing other religious and life experiences, discovering their cultural, even ritual commonalities and differences. This serves to valorize that which binds them together even more: Islam.

This shared experience creates a cosmopolitan, or universalist, form of Islam. Particular to Europe, it entails a number of new necessities for the growing Muslim community. With issues of language and new problems being encountered, immigrant elders can no longer cater to the religious and spiritual needs of these new cosmopolitan Muslims. As a result, a rich and diverse set of Muslim intellectuals, academics, community leaders, imams and religious organizations has emerged. Among the first group is Tariq Ramadan, who highlights the centrality of Muslims in Western Europe as the future of Islam in the world, English as key language for global Islam, Western Europe as a pilot project for global Islam and Western Europe as the "mirror" against which globalized Muslims construct identities as embodiments of this universalist Islam.

If that is the beautiful and promising side of the Muslim experience in Europe, there is also a negative one. Among the new organizations, groups defending literalist and simplistic understandings of religion, benefiting from major funding from countries such as Saudi Arabia, have managed to make gains on the back of this cosmopolitan approach to religion. Their preachers, able to offer easy answers to those seeking them, are able to attract some converts, but also second or third generation Muslims who, through this heightened sensitivity to the Islamic rather than the cultural, have found the Islam of their parents to be too folkloric or too "diluted" by culture. Also, in their simplistic rigidity, they find mainstream Sunni Islam to be too influenced by Sufism, a broadly accepted spiritual science which they reject. These "Salafi" groups open the door to new transnational networks, linking them to groups abroad.

As one may observe by watching any of ISIS's well-funded and well-directed promotional videos, as well as adhering to this simplified interpretation of Islam, ISIS advocates a united Muslim world beyond nationalistic borders. Such an aim is very much in line with the idealism that is produced by the European Muslim experience, which should be seen as religiously legitimate, and not a sign of extremism. However, through this lens, the struggles of the Muslim world also become universal, and consequently, European Muslim sympathy and militancy goes transnational. Highly mobile, children of immigrant families act both in avowed opposition to and alienation from their home country and government, and in avowed identification with a broader Islamic cause in the name of the global Muslim community.

ISIS's multi-ethnic transnational and violent militancy, despite being based in the Middle East, epitomizes, in its most radical form, the "de-territorialized" Islam of Europe. It is no surprise to see European, American and Australian fighters in their ranks, disproportionally represented, and even less surprising to know that English is one of the main languages of communication within the organization. Is it not ironic that here"jihad" is being exported from West to East? As the policies of many Western and Middle Eastern countries are seen to be increasingly aggressive and insensitive vis-à-vis Muslims and Islamists, and as Islamophobia increases in the West, there is broader resentment and reaction. In some contexts, Western Muslims, and even non-Muslims, become attracted to certain strains of Islamic discourse and practice, not for religious reasons but for its political appeal. Thus "Islam" emerges as a powerful signifier not only to challenge a failed status quo in the Muslim world but also racism and inequalities in the Western one.

The extent of the above should not be exaggerated. As highlighted, the experience of the vast majority of European Muslims is a fruitful and positive one. Recent events involving ISIS in Iraq and news relating to European Muslim fighters, especially in Turkey and the Middle-East, has largely failed to diagnose the causes of their involvement, revealing a gap in understanding in regard to the religious experience of their co-religionists in Europe. Thus, the individual involvement of European Muslim men is wrongly assigned to that of agents of the "bigger picture," that which rightfully sees the workings of various states battling for power and interest in the continued tragedy unfolding in Syria and Iraq.