An insight into France: The Algeria national football team 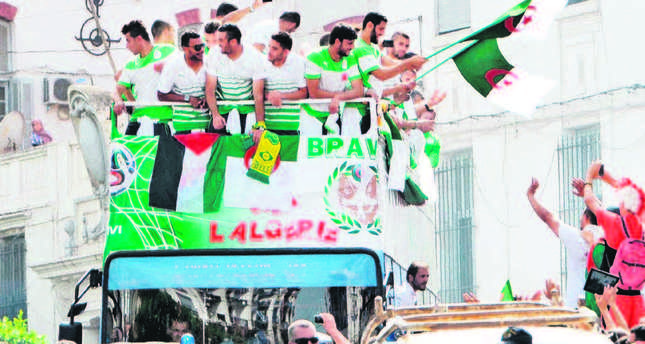 by Ceyhan Boya Jul 08, 2014 12:00 am
The Algeria football team won the hearts and minds of not only the Arab and Muslim world, but all who have a penchant for the underdog. Statistically the least favored team at the start of the tournament, the Algerians managed to qualify for the second round while putting gutsy and technically-adept performances, a first in Algerian footballing history.

Even after their elimination, they continued to win the hearts of their admirers when they announced that they would be donating $9 million (TLc20 million) of their World Cup prize money to the needy in Gaza. Their "spiritual victory" put the media spotlight on Algeria and increased the feeling of national unity being enjoyed in the country. However, the media failed to realize that this victory reflected more the failures of France than the successes of Algeria.

Sixteen players of the Algeria squad are French by birth, or second-generation immigrants; they have been raised and educated in France. Interestingly, all of them have been trained through the national French football youth system, wearing the shirts of France throughout their young careers. In 2010, FIFA relaxed its rules, allowing for players that had previously played for one country to switch their allegiances to another. The legislation prompted a professional exodus from France of which no less than 25 players appeared in World Cup 2014: Three left for Cameroon, three for the Ivory Coast, two for Ghana, one for Argentina and a mighty 16 for Algeria. Beyond a professional career choice, which might have very well increased their chances of playing in a World Cup, their moves reflect a much deeper malaise in French society and served to highlight the issues second-generation immigrants have when representing their country at international level.

Who could better explain this malaise than France's star striker Karim Benzema? Another French Algerian, but, more prominent than his counterparts, he has continued to play for the French National team. The French press has repeatedly criticized him for not singing the French national anthem at matches. This criticism is muted when he scores crucial goals for the side as he did in this World Cup. In 2011, he told So Foot magazine, "Basically, if I score, I'm French. And if I don't score or there are problems, I'm Arab."

The issue seems to worsen when it comes to "Beurs," a popular term used to describe the French of North African descent. Fuelled by memories of France and Algeria's intertwined but bloody modern history, colonization and the struggle for independence, football has not escaped the wider debate regarding integration and assimilation. It is also reflective of the "Beur" struggle for equality. French Algerians have a long tradition of social unrest with riots in some areas of Paris so frequent that the international press overlooks much of them. Algeria's qualification for the last-16 play-off has brought the issues of identity, allegiance and social inequality back to the fore when French Algerians took to the streets in loud celebrations across France, meeting harsh reaction from local administrations and police, who went as far as banning "foreign flags" in city centres. As could be expected, the situation escalated and celebrations were replaced by conflict and tension on the streets with police clampdowns and counter protests that saw the burning of the Algerian flag.

However, France continues to seek the blame elsewhere. Unsurprisingly, Islam has not escaped the list of culprits. As I was listening to an interview of the academic and writer Tariq Ramadan on French radio discussing the recent events, the radio presenters were complaining about the collective and public acts of prostration on the pitch by Algeria's Muslim players. According to the broadcasters, this public show of faith was increasing the polarization between Muslims and non-Muslims in France. "Would it not be better if it was kept for the private realm?" asked the disgruntled commentator. As was argued by the interviewee, all players should have the right to express their personal convictions, just as Catholic players do, without criticism, when they make the sign of the trinity as they enter the pitch.

Algeria's national team manager, Vahid Halilhodzic, threatened to leave a press conference after he was bombarded by questions in regards to whether the Algerian players were fasting for the month of Ramadan. Fasting is a personal choice, relating to ones religious understanding and consciousness. The team manager was therefore right to react harshly to journalists who should have been focused on football rather than the extent to which players adhere to Islamic practice. However, the press was eager to add a religious dimension to their reports on the Algeria team.

Maybe the best answer to these overly curious observers came after Algeria's elimination from the competition. The team was given a hero's welcome on their open top bus in the streets of Algiers where they proudly displayed Algerian flags but also a Palestinian one. Islam Slimani, one of the players who made his mark on the pitch during the tournament, announced the collective decision to donate the $9 million in prize money earned this World Cup to the Palestinians of Gaza. The explanation was simple and touching: "They need it more than us." Not only was this a highly humanistic act in sympathy for an oppressed people but it also served to highlight the most recent military attacks by Israel and illegal settler violence directed at a largely defenceless Palestinian population. With this act of transnational solidarity with fellow Muslims, and generous charity, the team continued to rise in the esteem of its supporters whilst exemplifying the spirit of the month of Ramadan.

France has once again failed its Algerians, but its Algerians have not failed France. Algeria's national football team has epitomized the great talent and potential that exists in France's second-generation immigrant community, mirrored across Europe. Beyond their hard-work and great sporting achievement, these young men have also upheld some of the highest of human ideals: solidarity, compassion and charity. The latter reinforced by their faith, an asset to both their country of birth and their country of origin. Unfortunately, the French state and media struggle to see the immeasurable value of these young people, products of their own country, and prefer to make them the subject of polemics. If the choice to play for Algeria is purely professional, as some have suggested, then France has even more reason to hail their success. But it does not, and where France has failed, Algeria has come to benefit. The rest of us will continue to appreciate and admire them for their entertaining football, moral standing and generosity.