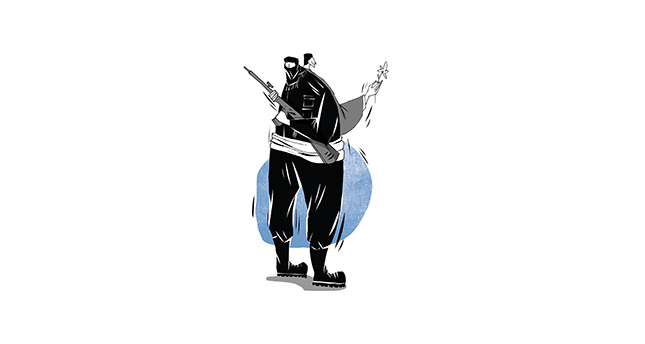 While the U.S.-led global coalition is running a fight against the Islamic State of Iraq and al-Sham (ISIS) in Iraq and Syria, some states carry out a seemingly just, but in reality, a sneaky war against mainstream Islamic circles in domestic politics.

ISIS's aggressive campaigns in Iraq and Syria and cruel killings that went viral online have provided a legitimate ground for joint action on a global scale. Accordingly, along with governments, millions worldwide have supported the global coalition against the infamous ISIS, including millions of Muslims. Needless to say, ISIS has so far served mostly to the defamation of Islam. It was due to this that Muslim circles in many countries declared that ISIS has nothing to do with Islam except causing the destruction of lands populated by vulnerable Muslim communities that have long suffered from authoritarian governments, foreign invasions, civil wars and absolute insecurity.

Nonetheless, while an evil brought millions together worldwide, some countries have put into place a wicked agenda of making use of global concerns to actualize local agendas. As a prime example of this, Kosovo, the second largest Muslim populated country in Europe after Turkey, launched a witch hunt on Islamic circles in the country.

Kosovo, in order to show its full support and commitment to the global fight against ISIS, happily extended the fight to its domestic politics. Having taken advantage of the global concern, Kosovo has securitized Islam and hence framed Islamist circles in Kosovo as supporters of ISIS. The government, accordingly, detained people with vague and fuzzy claims of "arresting the potential recruits of ISIS," "pre-empting domestic terrorism" and "stopping the Islamist jihadist fighters going to Iraq and Syria." Therefore, the government has, supposedly, contributed to both global and domestic security by preventing both the potential terrorists from leaving the country to fight against the US-led global coalition, and the jihadists from returning from Syria and Iraq as terrorists to blow up public places in Kosovo. Prime Minister of Kosovo, Hashim Thaçi, wrote in The Guardian on Sept. 30, 2014 that "[a]s prime minister, I reject suggestions that we are a safe haven for radicals – we are taking decisive action to destroy jihadi networks." It was in this scope that Kosovo's police have so far arrested 45 suspected militants and Muslim clerics who are supposedly pro-ISIS and sponsor and advocate the jihadist war declared by ISIS.

However, what happens on the ground is completely different. Although all of the mainstream religious circles, including the official Islamic Community of Kosovo (BIK), have denounced ISIS's acts in the name of Islam, most of the arrested people, particularly imams, are among mainstream circles. Accordingly, one of the arrestees, Dr. Shefqet Krasniqi, the imam of the Grand Mosque in Pristina, for example, is a fierce denouncer of going to Middle Eastern countries to join the on-going war as fighters. However, he was arrested incomprehensibly on charges of preaching extremism, indoctrinating youth in radical Islamist lines, encouraging people to travel to Iraq and Syria to join the war and helping to recruit for ISIS.

Yet the arrests have been rightfully denounced by political and intellectual circles as being politically motivated. The government, accordingly, was blamed of taking extremism as a pretext to frame every single religious demand and demand holder and as a consequence the government was showing that it is "a loyal ally to the international community." British colleague of mine of Albanian descent interpreted these acts confirmingly: "The government is in crises and it is either trying to distract attention or prove that it is anti-Islamic enough to stay in power – this is what many are saying."

While this is happening in Kosovo, unfortunately, the Turkish media has remained uninterested in the issue and has been busy debating whether the Justice and Development Party (AK Party) government supports ISIS or not. The Gülen Movement's media group was an exception, to which we will touch on below. Due to the political turmoil in domestic and international politics, the AK Party government has seemingly been unable to intervene in Kosovo's suppressing of mainstream religious circles with which the AK Party has close relations. Whatever the excuse is, this is a negligent standing, because Turkey undeniably bears a responsibility toward the Muslim affairs of Kosovo. It has acted accordingly so far. The Turkish International Cooperation and Development Agency (TİKA) and Directorate of Religious Affairs (DİB) missions in Kosovo have built intimate relationship with both the BIK and other moderate religious circles and have shown concern for protecting Ottoman and Turkish Islamic practices and artifacts from the Salafists in the country. For instance, the Grand Mosque, the imam of which was arrested for being a radical Islamist, was restored by TİKA. The Grand Mosque's now imprisoned imam, Dr. Shefqet Krasniqi, met Ahmet Davutoğlu and urged for Turkey's further involvement in Kosovo to prevent radical groups from gaining an upper hand over the more traditional moderate Islam.

However, due to international and domestic claims about Ankara's alleged supporting of radical Islam abroad, Turkey has been unable to officially counteract Kosovo's misuse of a global concern. Shockingly in Turkey, an opposition block, the Gülen Movement mischaracterized Kosovo's suppression of religious circles to further discredit the AK Party government. As part of Kosovo's fight against so-called Islamic radicalism, one of the biggest pro-Islamic religious associations in Kosovo, the Association for Culture, Education and School (AKEA) was closed in late September 2014 with the alleged claims of radicalizing Islam and spreading radicalism in the country. AKEA has long been supported by Turkey's diplomatic and humanitarian missions in Kosovo in order to enhance the Ottoman-inspired societal bond between Kosovo and Turkey. AKEA is among the rare groups that embraces the Ottoman past of Albanians and turned to Turkey. Their Islamic agenda, therefore, had nothing to do with extremism or radicalism, but reviving Ottoman forms of affairs between Muslim communities in Kosovo. However, Today's Zaman and the Cihan News Agency of the Gülen Movement, with reference to Turkey`s backing of AKEA, reported on Sept. 25, 2014 that TİKA, the Yunus Emre Institute and DİB offices in Kosovo were funding ISIS and the Nusra Front in Kosovo. The evidence they put forth was the arrest of Krasniqi and the closing down of AKEA. What the Gülen Movement is trying to do is obvious – leaving Turkey in a tight spot domestically and internationally at the expense of helping Kosovo in its sneaky fight against moderate Islam. Yet it is striking to see how quick they forget that their activities in Kosovo were also supported by Turkey's mission, and in unprecedented manners.