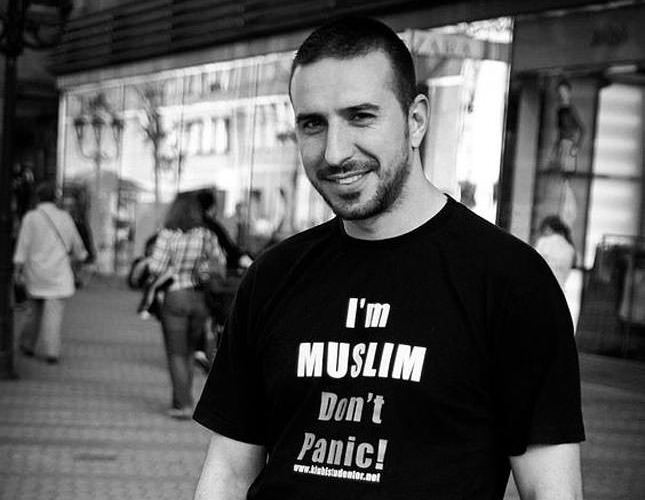 by Mahmut Aytekin Nov 04, 2014 12:00 am
Most of you might have heard of Bruce Woodley's famous song "We are Australian." Its lyrics are filled with cultural and historical references. Woodley's song lyrics continue with the chorus "We are one, but we are many, And from all the lands on earth we come, We share a dream and sing with one voice: I am, you are, we are Australian."

Australia, a country known for its wildlife, green tropical forests and its coastal regions has been the center of multiculturalism and religion for the past 60-odd years. Though recently, this luscious imagery has started to crumble with the globalization of anti-terror laws. Australia is said to be home to 150-odd races living in harmony, with various faiths including Roman Catholics, Anglicans, Hindus, Jews and Muslims. The sound of different languages comes to the ears of every Australian citizen, each singing a song of their beliefs, cultures and history.

As an Australian citizen of Turkish origin who works for a humanitarian aid NGO while possessing a blue Australian passport, I am subjected to the act of Section 116 of the Australian constitution which clearly states: "The Commonwealth shall not make any law for establishing any religion, or for imposing any religious observance, or for prohibiting the free exercise of any religion, and no religious test shall be required as a qualification for any office or public trust under the Commonwealth." I believe Woodley's lyrics are slightly losing their magic. Recent data shows that the people within the Australian population who are not Anglo-Saxon are starting to question their future within this bright-sanded country.

I recently attended a conference on the topic of "Islamophobia" at Marmara University in Istanbul. Merve Şebnem Oruç, one of three speakers present struck a chord with her analysis of the globalization of Islamophobia throughout the world. Oruç said that "Australia and Canada are behind in Islamophobia." An analysis I would have to agree with, while we can see both Australia and Canada breaking out of this multiculturalist shell.

Those of you who read the Australian newspapers will know of the raids that have taken place in Melbourne, Australia. It was reported by various news sources that 800 police officers were used to raid 10 homes, equaling to 80 police officers per home. Criticism had come from the opposition Labor Party. Suspicion grew around the intent of the raids that took place, by some coincidence, 10 days before the new Anti-Terror laws were going to go through the Australian Parliament.

The Islamic state of Iraq and al-Sham (ISIS) crisis is, as prominent Muslim scholar Hamza Yusuf puts it, a big issue of concern for both Muslims and non-Muslims at the moment. We don't have to mention the problems the neighboring countries of Syria and Iraq are facing as this is a national security issue. The main concern here is the prejudice Muslims are suffering in Europe, the Americas and the Oceanic region. In general, Europe and Australia are shown as countries that could be a role model for the development of democracy throughout the world. Though, how democratic is the banning of Islamic symbols such as the minaret? Or as the Australian news reported, putting females wearing the burqa behind bullet proof glass because they are considered "national security issues," and if they decided to show their faces, then maybe they would be able to take their places next to the "normal people." Tony Burke, a member of parliament in Australia sums up the situation with the following words, "I want children to learn about segregation from the courtroom scenes of 'To Kill a Mockingbird' not while on an excursion to parliament house."

As an Australian Muslim, I cannot comprehend and support the acts of the terrorist organization ISIS because, as Muslims, we are taught in the Islamic creed that "killing one innocent person is like killing the whole of humanity, and saving one person is like saving the whole of humanity." The ISIS crisis can be a project in which many different intelligence agencies and regional superpowers have a role. History has not been able to record such a group with numbers between 21,000 and 35,000. Though, as I don't support ISIS, I cannot support security forces raiding homes which are "estimated to have terrorist activity," when in fact the houses raided had 13-14 year old children being handcuffed, and their mothers having their hair brutally pulled and barged out of their homes. An Australian newspaper, The Age, reported that one of the families that had suffered from the raids had taken the Australian Federal Police Force to court for using excessive force and violence. No such evidence has been found to justify the raids and the use of excessive force.

Racism and Fascism have increased within the West. Photos on social media networks such as Facebook and Twitter put this argument at the forefront with images of graffiti on mosques and Islamic Cultural Centers going viral. The Daily Telegraph newspaper also reported that racism toward Muslims has increased, with a mother, who was wearing a headscarf, being racially abused in a doctor's surgery. Comments such as, "the government has given people permission to hate" puts the current situation out in the open.

The crimes and works of the racist Australian Defence League (ADL) is quite out in the open as it was planning to "go together" to the National Mosque Open Day at Lakemba Mosque. This is not the first time the ADL has caused damage to the adhesive of Australian society, trying to break down unity among the population. They are clearly going against the "Racial Discrimination Act 1975" and the "Australian Human Rights Commission Act 1986." Australian authorities have not been able to step up and put a stop to the situation, or to the abusive language witnessed at the Thornleigh Mosque in the city of Perth. Incidents of racism within Australian universities are also on the rise.

Universities should be a place where knowledge should be prized above all else and the experience should affect one's character in a positive fashion. But, within universities found in the cities of Sydney and Melbourne, racism is taking its toll. The Islamophobia Register Australia social networking page recorded an incident which had taken place on Oct. 25, 2014. A University of Sydney student had described that she "had left her office in which she had seen a group of teenagers surrounding a Muslim female wearing a headscarf and using foul language towards her." The account continues with her exclaiming that "she walked the abused female to her car though to her surprise, these university teenagers had started the abusive language with her also," targeting her for helping a Muslim.

Jewish, Muslim and Christian religious leaders called for a National Day of Unity on Oct. 25, 2014 to help work toward a solution to resolve the problem. Also legal practitioners have sought for solutions to the problems currently being faced, especially with the link of refugees from Muslim-majority countries to the new anti-terror laws. Aybüke Ekici, a legal practitioner majoring in refugee rights and the general secretary of the International Refugee Rights Association said, "A majority of the laws in Europe and Australia, regardless of their regions date back to World War II and need to be updated as soon as possible." She continues saying that "new intergovernmental organizations must be established as the current bodies are not enough to control the ongoing crisis between refugees and Western countries. Refugees who had fled from the Middle East due to the ongoing crisis seek refuge in European countries, but are stuck between a complete paradigm as they are not accepted due to the new anti-terror laws."

In addition, the Australian Government has to put a complete stop to the current insurgency of rights among the Australian public. Help should be sought from community bodies such as both religious and non-religious organizations in trying to keep the unity of the community together, in order to relive the Australian spirit and share the multicultural values which Australia holds. Religious leaders should also speak out against ISIS and take action in trying to guide youth away from this ongoing dilemma. To summarize, the Muslim populace, globally, should speak out about the true spirit of Islam being a "religion of peace" loudly so that the false mouthpieces of terror such as ISIS can be stopped. Again, as prominent Muslim scholar Hamza Yusuf said, "Either they [ISIS] are Muslim, or I am not." So what is happening to democracy down-under?