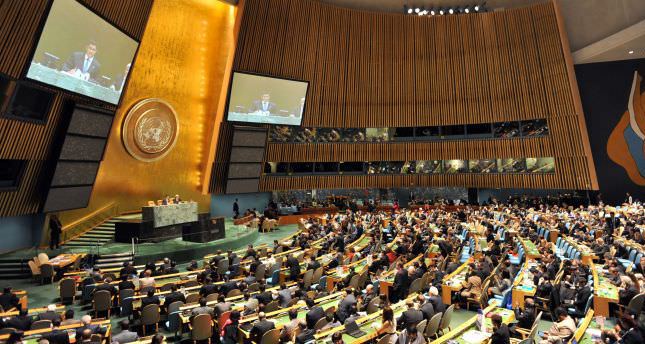 by Manik Mehta
Nov 07, 2014 12:00 am
The result of the Oct.16 election for a non-permanent seat to the U.N. Security Council (UNSC) sent analysts scrambling for answers for Malaysia's success and Turkey's failure to get the coveted seat. The two countries have many striking similarities – both have strong economic growth potential, a large Muslim population, largely liberal societies and a multi-ethnic character.

No doubt, Malaysia carried out a well-organized lobbying campaign in the run up to its election to the two-year non-permanent seat on the UNSC effective for 2015.

According to Malaysian Foreign Minister Anifah Aman, who was in New York to lobby for his country's candidacy, the "hard work" will now begin. "We cannot rest in complacency now that we have made it to the Security Council. We have to work hard to meet the trust and confidence placed on us by the member states," he told me after Malaysia's election.

For nearly two years, Malaysian diplomats in the U.S. and around the world lobbied their counterparts to garner support for Malaysia's UNSC candidacy. While Malaysia's U.N. permanent representative, Hussein Haniff, called on the envoys from the 193 member states in the past two years, Aman travelled far and wide to formally ask many of the world's states, big and small, to support his country's bid for the UNSC seat.

Malaysia lobbied aggressively but other factors also helped the country. It faced two Malaysia Airlines tragedies this year, catapulting the country into the international limelight, though for the wrong reasons. There was a surprise surge in sympathy for the country and its people as images of weeping relatives who lost their dear ones in the two plane disasters were viewed worldwide. International sympathy, experts say, translated into support for Malaysia.

Malaysia started well by first getting its candidacy proposed by the Association of Southeast Asian Nations (ASEAN), of which it is a founding member, which was followed early this year by a further endorsement from the Asian-Pacific region as well as by the Organization of the Islamic Conference (OIC) and the Gulf Cooperation Council (GCC). Indeed, Malaysia, which contested the UNSC seat after 14 years, was fortunate that its candidacy was uncontested by any other rival candidate from the Asia-Pacific region.

Malaysian diplomats had been touting their country as a peaceful and stable multi-cultural, multi-ethnic and multi-religious society. Malaysia, because of its small size, maintained a low-key international profile that was well received by the majority of U.N. member states.
Thus, it was hardly surprising that Malaysia bagged an impressive 187 of the 192 votes cast. Though the voting gave the country a strong mandate to push its agenda of what it calls promoting "world peace and stability through the voice of moderation," it will have to grapple with serious issues like the threat of terrorism from the Islamic State of Iraq and al-Sham (ISIS), the conflicts in Iraq, Ukraine and Syria; climate change and the plethora of human rights abuses worldwide among many others.

Malaysia will have to take a stand on the divisive issues of terrorism and human rights – international experts say that Malaysia's voice has been subdued on international conflicts and terrorism unless they escalate to such levels that one cannot help but join the chorus of condemnation.

Malaysia has also been ambiguous on the Russia-Ukraine conflict, but it expressed its frustration over the separatists' interference in the Malaysia Airlines Flight17 aircraft wreckage recovery efforts.

Malaysia's low-key pronouncements on international conflicts may have helped it secure strong support for its candidacy, but now that it is on the UNSC, it will have to take a stand on crucial world issues rather than just take a "principled stand."