Iran: The blessed enemy of the US 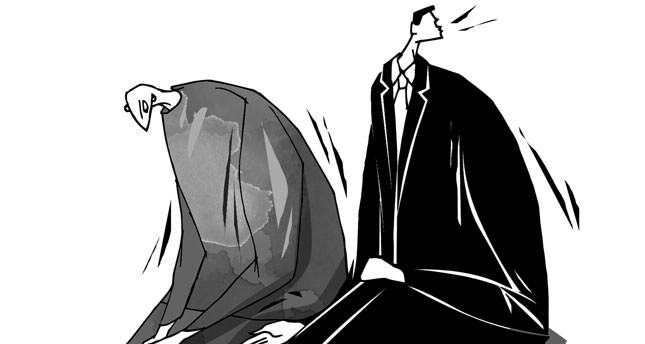 by Baha Erbaş
Nov 18, 2014 12:00 am
Recently, there was an amazing revelation that U.S. President Barack Obama sent a secret letter to Supreme Leader of Iran Ali Khamenei to discuss possible cooperation against the Islamic State of Iraq and al-Sham (ISIS). Months ago, on March 26, 2014, I wrote in my article in Daily Sabah, "The CIA, Iran and al-Qaida," that, " A couple of years from now, al-Qaida may start operations all across the Middle East and the United States may start fighting al-Qaida, with Iran helping the U.S. wage its war on terror. … Western public opinion about Iran may change from viewing it as a source of instability to considering Iran as the West's greatest ally in its war on terror. … Iran is the first country in the Islamic world that the U.S. can cooperate with against al-Qaida." Sunni ISIS should be phased out in the region so Shiite Iran can build its strengths and protect its interests. For the sake of the greater Middle East equation all terrorists have to be Sunni – that's how it has been adjusted.

Last week in New York I had a chance to meet David Fromkin, the author of "The Peace to End All Peace," which, we all know, is taught at the best universities in the world as one of the most monumental books on the collapse of the Ottoman Empire and the re-birth of the modern Middle East. While we were talking about American foreign policy, Fromkin said two crucial things to me. First, he said that if he was asked 10 years ago, he still would have had a strong impression that the 21st century will also be the American century. But, day by day, he is losing this perception – the Obama administration's foreign policy is very unsuccessful. The second thing that Fromkin pointed out, I have been trying to write in this paper for a long time: "Iran and the U.S. have many mutual interests; the animosity does not seem to me realistic." This is a quite shocking statement to hear from someone who influences American policy makers and those who advise them. This is not something that can be explained as "happenstance" or "coincidence."

Whatever has been done by the U.S. and Israel since the 1980s has helped Iran a great deal to increase its influence throughout the region. Israel's 1982 and the U.S.'s 1983 attacks on Lebanon gave the ideologically founded new Iranian regime a strong foothold in the Mediterranean to influence Shiites and a great opportunity to cement the alliance with Hezbollah about which Israelis complain today. Today, neither Israel nor the U.S. is in Lebanon, but Iran has a strong influence in Lebanese politics through Hezbollah. Iran is always in the background when governments collapse or are newly established in Lebanon. Three unfortunate things: the Iran-Iraq War, the Iranian hostage crisis and the 1982 to 1983 Lebanon wars, gave the first supreme leader of Iran, Ruhollah Khomeini, three great opportunities to strengthen the new regime ideologically and create a legacy for the revolution. Since then Iran has assiduously exploited sectarian factions in the region. The dictum of the "Shiite Crescent" emerged as the grand strategy with the disastrous help of the U.S. and Israel and is blissfully used by Iran's mullahs.

Iran had to have two stepping stones that were vital for increasing its regional influence: Iraq and Afghanistan. The U.S.'s wars in Afghanistan and Iraq gave Iran a sublime opportunity to exploit. These wars definitely diminished the reliability and the credibility of the US in the world and deteriorated the positions of the U.S.'s Sunni allies in the region. Once, at an event in Washington, Prince Saud al-Faisal, the foreign minister of the Saudi kingdom for the last four decades, said, "You Americans are handing the whole country [of Iraq] over to Iran."

For Iran, Saddam Hussein's Iraq was a fortress that cut the ties and lessened the influence of Iran's mullahs from the Persian Gulf to the Eastern Mediterranean. When they looked at the region they used to see Saddam's Iraq as a "heinous roadblock" that had to be brought to heel. Until the U.S.'s 2003 Iraq operation, the power balance in the Persian Gulf region had been set and balanced militarily between Iraq and Iran. By toppling Saddam's regime in Iraq, the U.S. destroyed this power balance to the great favor of Iran. The Nobel Prize laureate Joseph Stiglitz and Professor Linda Bilmes of Harvard referred to it in their book, "The Three Trillion Dollar War." The U.S. spent the money in Iraq and Afghanistan and Iranians did not waste a bullet, but they got rid of two major blockades of their two greatest enemies, which was more realistic than Israel.

Oddly enough, Israel and Iran are very compatible partners. Iran has evolved a tricky, delusional formula within the last three decades. On the one hand, it exploits all possible sectarian factions in the Middle East, which is mostly dominated by Sunnis, and on the other hand, it covers its sectarian difference from the Sunni majority, benefitting from the Israel-Palestine issue by threatening Israel. Iran emphasizes that Israel is the great Satan of all evil, the biggest enemy of Islam and takes advantage of this situation by exchanging hollow threats with Israel. If you happened to be the only official Shiite state in the region, with all the rest Sunni, and if you have really strong ambitions to influence the entire region, you need to find a common enemy to all the people of the region, delegate yourself the representative of all Muslims and cover your sectarian difference while using it assiduously by transferring all hatred and attention to Israel. That's what Iran does. Iran's Middle East strategy is centered on Israel. When the mullahs in Tehran curse out Israel, this fills the vacuum in people's minds throughout the region and pleases their hearts because of their Palestinian comrades' ordeal. Then, Iran finds in its favor Sunnis and Shiites supporting its attacks on Israel. If in the future we happen to see a solution to the Israel-Palestine issue, the biggest loser of such an accord will be Iran.

Once, Tom Donilon, a former national security adviser of the Obama administration, told me that they were not expecting the Arab Spring in the way that it turned out, which means that the U.S. had not been prepared for the new geopolitical situation and its far-reaching complications. So far, the Arab Spring has created a kind of political environment in which the U.S.'s Sunni Arab allies find themselves in much more difficult positions to manage. But the new situation hasn't brought Iran the same problems. Most likely, in the long run, the Arab Spring will have its greatest effect on Saudi Arabia.

To increase its regional mission and influence and set up a new geopolitical environment, Iranians have to find a way to end its international isolation. By the way, the U.S. knows very well that a more isolated Iran becomes more of a troublesome nuisance. If the U.S. were looking for some major policy changes in the region, which I assume they are not, it would in some way need Iran. Iran has had a skillful and dirty hand in Iraq, Syria, Lebanon and the Israel-Palestine issue. Now Iran and the U.S. have a mutual enemy to work against again: ISIS. And then we will see the long-term partnership, it seems, for which Iran is chosen.