Exploiting victims of 'Old' Turkey to reinstate the Old Turkey 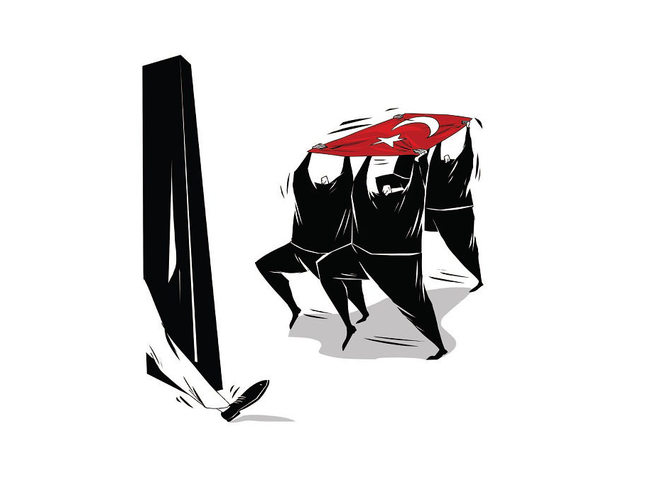 The concept of ‘New Turkey,’ as introduced by the AK Party, envisions considerable changes in the state’s structure. Although this vision is favored by a large part of the country, the concept itself has sparked an intense debate on the dichotomy of ‘new’ and ‘old’ Turkey

The concepts of an "old" Turkey and "new" Turkey and what they entail have been debated a lot recently and the supporters of each concept seem to be accusing one another of being undemocratic and intolerant. When there is such a dichotomy, it is hard to distinguish the truth and choose which side to believe. To summarize the claims of both sides in a nutshell, the supporters of new Turkey, which is led by the current ruling party, claim that the state is for the people and the concept entails some of the ruling party's goals for its 2023, 2051 and 2071 visions. On the other hand, the supporters of "old" Turkey claim that the new Turkey choir is straying from the foundations set by Mustafa Kemal Atatürk and is intervening in people's lives and social spheres. This discourse has always been there, but it has intensified in the last decade.

Comparing the arguments of both sides with the results of parliamentary and local elections in the last decade, there appears to be a steady increase in votes for the representatives of the new Turkey while votes for the other side has almost remained the same. In fact, in the recent presidential election, despite a well-campaigned alliance by the opposition parties and circles, the candidate for a new Turkey won the majority of public vote and was elected in the first round.

Nevertheless, there is also a considerable rate of the population in Turkey that is unhappy with the rule of the current ruling party and wishes the old Turkey was still in force. However, looking at the records of the old Turkey, one will come across a symbolic parliamentary system, a number of coups, numerous unsolved murders, the hanging of a prime minister, unlawful practices such as state of emergency rule in the southeast, the headscarf ban, a racist national oath, the denial of cultural rights, large scale periodical corruption incidents and so on. Again, checking the course of violent events in Turkey, one can clearly see that the old Turkey was very skilled at producing multiple enemies from within its own community. The conflict in the southeast of Turkey, which has cost hundreds of thousands of lives, was a result of the policies of denial of the old Turkey alongside its oppressive practices. Similarly, the non-acknowledgement of Alevis and the hostility toward them by the old Turkey has led this particular community to feel unjustly treated and, consequently, there is an antipathy among members of this community despite some openings by the current ruling party.

The trauma that various ethnic and faith groups went through during the era of old Turkey have unfortunately led a substantial number of citizens to be in opposition to the government. There have been concerns that the unjust treatment that these groups suffered is being exploited by some circles in various countries, but also in Turkey to consolidate their bitterness toward Turkey. What many struggle to understand is the fact that these groups experienced unjust treatment due to the denial policies of the old Turkey, however, they seem to be more averse to the representatives of the new Turkey who were first to acknowledge the wrongness of these denial policies, and as such, initiated some key openings and processes to improve the rights of certain groups. Despite this, it looks like the victims of the unjust treatment of the old Turkey stood and continue to stand - voluntarily or involuntarily - by the side of the representatives of the old Turkey during key political unrests such as the Gezi Park demonstrations.

Although it is quite understandable that the people from oppressed ethnic and faith groups feel hurt and angry toward Turkey due to the unlawful and offensive practices of the old Turkey, it is hard to comprehend how the victims of old Turkey could let some circles both in Turkey and abroad, but in particular their own perpetrators, to exploit their trauma and suffering to attain their hidden interests. Especially seeing that oppressed fragments of society are exploited during upheavals in order to reinstate the old Turkey - the main cause of a number of issues - is beyond sad.

A considerable number of Kurds, Alevis and members of Turkey's Kurdish Hizbollah (KH) still continue to feel resentment toward the old Turkey, but it is the representatives of the new Turkey who are at the receiving end of this resentment. Although there appears to be some improvements in regard to the rights of the first two groups, the cases of members of KH remain untouched. Interestingly, although a large number of KH members were seen as murderous criminals by the old Turkey, they were granted leave or citizenships in many cases upon their entry into European countries. This is not only in the case for KH's members, but also for other groups that feel resentment toward Turkey.

It is apparent that the new Turkey is greatly ruining the interests of some circles and it looks like these circles are again latching onto the oppressed groups to stir up Turkey. The recent Kobani protests have shown how easy it is to deconstruct the positive achievements of the Kurdish reconciliation process, which was almost about to cost unpredictable consequences for President Recep Tayyip Erdoğan, if at the time the chief of the National Intelligence Organization (MİT) had accepted state prosecutors' call for interrogation due to his involvement in the initial negotiations of this process. While this is the case, it is sad that there is wavering commitment for this process by the People's Democratic Party (HDP). However, regardless of the ongoing destructive maneuvers and aversion by embittered groups of Turkish society, ongoing outreach work alongside resolution packages is imperative for Turkey to gain further progress in winning over the hearts of these groups. Resolution processes or packages should not be subject to the commitment of other parties concerned, but should continue as a state policy. Otherwise, the new Turkey could fall into the trap of adapting the policies of old Turkey due to ongoing destructive maneuvers of the circles of the old Turkey. Isn't this the ultimate goal anyway?