Building mutual understanding in the face of distorted perceptions 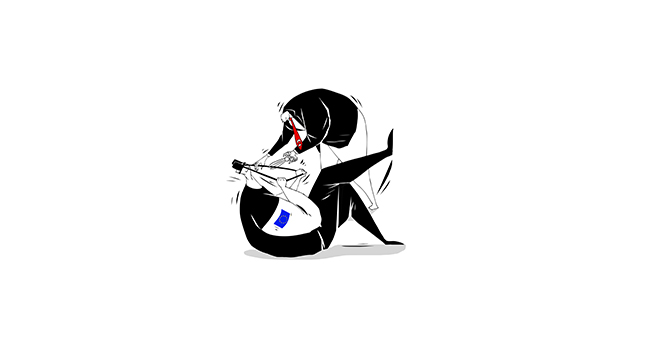 by Fatma Genç Ünay Mar 02, 2015 12:00 am
Though many commentators and public figures these days make hasty comparisons between the 9/11 attacks in the U.S. and the recent terrorist attacks that hit the Charlie Hebdo satirical magazine and a kosher market in Paris, there are also many other responsible comments and perspectives that focus on the ultimate motivation behind these heinous attacks. They look to find possible underlying reasons in connection with French policy in Syria, Mali and Chad as well as the effect of a recent vote in the French parliament that urged the government to recognize a Palestinian state following similar measures in Britain and Spain. If Europeans fall victim to those shallow and misleading comparisons, this may cost them their hard-earned multiculturalism - leaving Europe exposed to a further escalation in racist, Islamophobic and xenophobic sentiments.What must be done first during these delicate days on the part of European countries is to avoid fueling a distorted image of Islam and Muslims, and to make efforts to better understand the root socio-political and international causes of terrorism. If this happens, they will find all Muslim countries in solidarity with them in the fight against terrorism, as stressed by high-level Turkish officials in the aftermath of the attack. The so-called war on terror strategy adopted by former U.S. President George W. Bush in the U.S. following the 9/11 attacks did not make the world more secure - on the contrary - it has created terror safe-havens, especially in Iraq and Afghanistan, following the invasions of these countries. Now Syria, because of the inconsistent policies of Western countries, is on its way full speed to becoming a safe haven for multi-national terrorist groups. The U.S. and European countries must reconsider their policies that laid the groundwork for the escalation of terrorism in the Middle East, and distance themselves from approaches that use terrorism as a pretext to intervene in the region for political and economic gains. They must also put pressure on Israel to lift the blockade on Gaza, to go ahead with the peace process with the Palestinians and respect international law. Western countries must also re-evaluate their policy concerning the Arab Awakening and, instead of siding with undemocratic regimes, must support the democratic transformation in the region. Of course, there can be no excuse for terrorism, but it is a well-tried fact that extremism generates extremism.

If European countries act irrespective of the matters outlined above, extremist and terrorist groups will continue to gain ground and find safe havens for themselves in the Middle East. As shown by the recent trends against Muslims in a number of European countries, racist, xenophobic and Islamophobic movements that stand in stark contrast to the founding philosophy of the EU will continue to gain ground across Europe. Inflamed by the economic crisis, these movements have secured stronger parliamentary representation, negatively affecting debates on multiculturalism, pluralism and living together with differences. Unfortunately, arguments claiming the complete failure of multiculturalism in Europe will be voiced more loudly following the attacks in France. Holding public demonstrations since October 2014, the Patriotic Europeans Against the Islamization of the West (PEGIDA) is now well-positioned to impose its Islamophobic agenda on German society, and France's rising far-right political party, the National Front led by Marine Le Pen, will take this opportunity to push for tighter measures against Muslims in the country. The talk of a perceived "Islamization" threat in Europe gives European social memory a subliminal message based on alienation and discrimination. Demonstrations held by PEGIDA have been denounced by large segments of the European public calling for tolerance and openness toward Muslim immigrants. We hope this common sense will not be marred by the recent attacks in France.

Difficult days are ahead for Muslim communities in France and across Europe, although two out of the 17 people who were killed in the Charlie Hebdo massacre were Muslims - one of them was the 42-year-old Muslim policeman Ahmet Merabet who lost his life as he protected the magazine from the attackers. American and European media outlets put a spotlight on the identity of the attackers, which causes damage to the daily relations and interactions of Muslim people in France that is hard to recover from. This kind of media coverage breaks Europeans' faith and trust in their next-door Muslim neighbors, classmates, colleagues, students, academics, journalist and every Muslim in society. European Muslims are fearful of a backlash and pressure due to the attack, and the Western media coverage focusing on the identity of the attackers makes the situation worse. European Muslims do not want to become the scapegoat for every terrorist attack in Europe or elsewhere in the Western world.

Already suffering from a distorted image and restrictive arrangements, particularly in France and Europe in general, Muslim women will face further hardships following the Paris attacks. It is no secret that in the lower layers of European social memory there is a tendency to look down on, to insincerely sympathize with and to victimize Muslim women, youth and children, which finds its roots in the colonial era and an attitude of orientalism, and manifests itself in various ways in modern times. Muslim women who seek a presence in different fields of life with their religious values, thus gaining more visibility in business, politics, media and academy, have become the number-one target of the Islamophobic, racist and xenophobic wave in Europe. Some countries put into force restrictive legal regulations aimed at Muslims' religious values, such as banning veils like the burqa and scarf.

Despite all the ups and downs, accession negotiations between Turkey and the EU are still on the move. It cannot be ignored that besides other factors, the perception of Muslims by the public of EU member states will have a decisive impact on the ultimate outcome of the negotiations. In other words, when it meets the required criteria for entering the EU, Turkey will come face to face with an important hurdle it needs to overcome - negative public perceptions of Muslims in the mentioned countries. The image associated with Muslims, particularly in some key EU member states, may render debates on Turkey's EU accession bid, as well as the voting behavior concerning the acceptance of Turkey's full membership, as biased to a considerable degree. This state of affairs necessitates the need for further and deeper curiosity to put the spotlight on the dimension of perception of Turkish-EU ties. Resolutely keeping reform processes in Turkey alive and making the country's reform efforts better known to the European public are of vital importance for Turkey's brand image as a country to make progress in the eyes of Europeans.

It is clear that the Paris terrorist attacks may spell a bleak future for the perception of Muslims in Europe, already deteriorated by rising racist, Islamophobic and xenophobic sentiments on the continent. These kinds of developments no doubt further impair the already twisted image of Muslims and their culture in the eyes of Europeans, creating an unconducive environment for Turkey's goal of EU accession. However, fostering channels of dialogue, people-to-people contact and two-way communication between Muslims and European populations will surely help to defuse mutually fallacious stereotypes, laying the groundwork for a convenient milieu of knowledge- and interaction-based perception.

To reverse the tide that leads to the "othering" of people who come from different religious and ethnic and cultural backgrounds, values underlying the EU must be highlighted and touted by civil initiatives at diverse platforms and through various activities. Building a positive image of Muslims should become one of the keys in forging a more favorable Muslim image in the minds the population of the EU. The impact of civil society organizations at home and abroad on personal and mass perceptions of Muslim women and the role of female heads of non-governmental organizations in image building, as well as the impact of the negative portrayal and perceived image of biased treatment of Muslims in different contexts must be given particular attention at this point.

In this context, a great responsibility rests with non-governmental organizations, particularly those led by women. Turkish non-governmental organizations for women in cooperation with their Turkish and European counterparts can play an important part in defusing distorted images of Muslim women in Europe. They can engage in activities highlighting the contributions of Muslims to their European host countries in areas such as culture, art, fashion, poetry, literature, history, religion, politics, medicine, civil society and business. They can develop joint projects to show the real face of Islam and Muslim women to the European public and explain that Islam is about peace, solidarity and fraternity, and not violence, extremism and terrorism. Using a well-prepared mix of communication activities, they can get this fact across to the European public - those resorting violence and terrorism in no way represent Islam or Muslims.

The coverage of Western media outlets' of the Paris terrorist attacks, as stressed above, focused on the identity of the attackers and prevented people from seeing the matter from a multifaceted view. The image-making effect of visual and print media has the power to generate individual and social images of Muslims in Europe. The role of the media is critically important for the better-positioned and well-gifted improvement of person-to-person contact, interaction and mutual understanding between the European public and their Muslim communities. Further efforts must be exerted to improve the portrayal of Muslims by European media outlets. The energy and potential of Muslims in their professional lives from business to politics should be utilized to this end.At the same time, the impact of mutual perceptions of Turkey's EU accession process should be given more scholarly curiosity and research projects focusing on this matter should increase in number. In connection to this, problems facing Muslim women in terms of manners of dress, living styles, religious beliefs and ethnic origins require discussions with a broad base and comprehensive approach spotlighting how negative perception of Muslims from different walks of life have an impact on social and personal attitudes toward them, and how negative images induce prejudiced treatment of Muslim in various contexts.

Last but not least, we should take into account the words quoted by a Euronews article, of the renowned Muslim scholar Tariq Ramadan in our efforts to defuse misconceptions of Islam and Muslims in Europe and around the world: "You know 90 percent of my time I am coming to the media (to explain) what Islam is not. I am not invited to say what Islam is, what the values are, what is the spirituality that we are sharing. I am always put on the defensive: tell me why you are not a danger? Why don't you want me to tell you why I am an added value in this society, to which I can bring something. The perception of Muslims in the West is always either you are apologetic or you are on the defensive. We have to stop this way of talking to ourselves. ... This is what I am saying to Muslims around the world ... don't isolate yourself, don't be on the margins, come into the mainstream, be visible, be vocal, be the voice of the voiceless, of the silent majority that are all against what is happening."