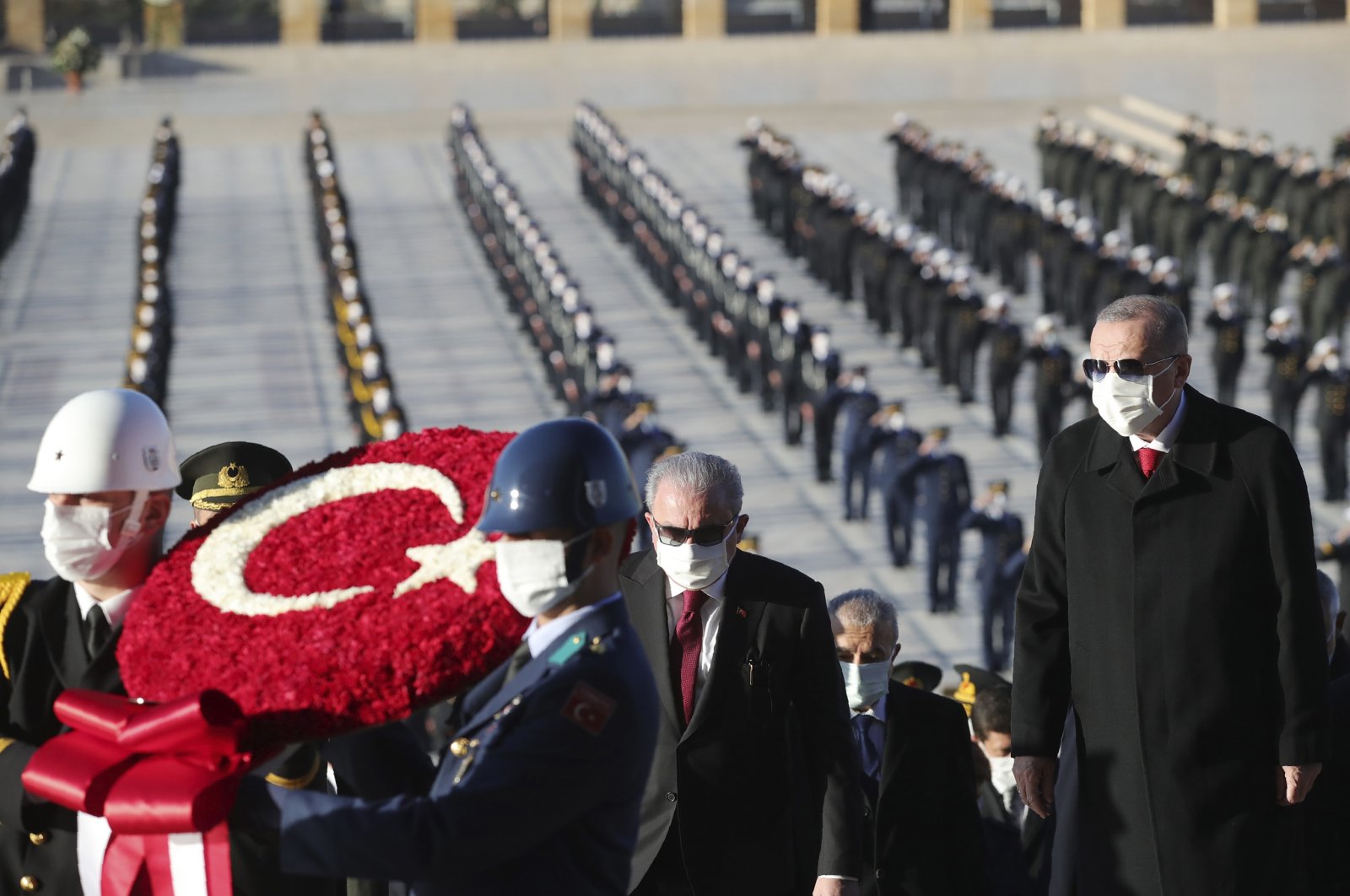 President Recep Tayyip Erdoğan (R) and other Turkish political leaders visit the mausoleum of modern Turkey's founder, Mustafa Kemal Atatürk, during a memorial ceremony on the 82nd anniversary of his death, in Ankara, Turkey, Nov. 10, 2020. (AP Photo)
by Nagehan Alçı Apr 09, 2021 12:05 am
RECOMMENDED

The recent declaration signed by some 104 retired admirals, which popped up on a website known for rigid militaristic views, cannot be seen as just a letter in Turkish sociology.

On April 3, a controversial declaration, which was prepared by a group of retired admirals to express concern and disagreements about some events in the last days, came up.

Before analyzing the situation, I should remind you, dear readers, that Turkey has a long history of military coups. There have been coup attempts by retired officers in the past which even ended with death penalty.

So, if the 104 high-ranking army members come together, the whole nation remembers the past and doesn’t see it as a freedom of expression. It is seen as a threat to the elected government.

The generals are pointing at the importance of the Montreux Convention, which was signed after World War I to secure peace in the Bosporus and the Dardanelles. It is a vital agreement and there is no agenda to retreat from it or change it.

However, with the plans to construct the Kanal Istanbul project, a new waterway canal to unite the Black Sea and Marmara, the generals raised concerns about the treaty.

Actually, the project is not linked to the convention in any way but aims to provide a new alternative for the ships who want to cross to the Black Sea and vice versa.

Thanks to such a project, more ships can cross and Turkey can regulate the tariffs and the sea traffic.

On the other side, there is no discussion about the future of the Montreux Convention, which controls the traffic in the two regions I mentioned above. However, the admirals want the government to abandon the plans to build a new canal.

Everyone can express his or her opinion in a free society but a declaration signed by a big number of army members is not simply an expression of the views but is seen as a threat to the civil authorities.

In the declaration, there is also a reference to the pictures of an admiral in religious clothing seen at a prayer meeting. They say that this picture is evidence of an anti-secularist trend in the Turkish army.

However, as soon as it came out, that picture got investigated by the Defense Ministry while President Recep Tayyip Erdoğan strongly opposed it. Rumors about the spread of anti-secularism have always been used as an argument to legalize military coups and interventions in the past.

During the 1990s, late Prime Minister Necmettin Erbakan’s Welfare Party (RP) was shut down several times depending on the same claims. There was also a trial to close down the ruling Justice and Development Party (AK Party) in 2007 on the same claim.

The military tutelage system has always used the same argument in Turkey to suppress the elected conservatives.

The AK Party has been in power for over 20 years now and it should have long been seen that there is no retreat from secularism and, quite the opposite, many academics say that, during the AK Party years, the society has become much more secular.

But unfortunately, this argument has been a tool to use against governments that are not "approved" by the military tutelage actors. That is why the declaration has raised high concerns.

Turkey has come a long way during the AK Party years. The military tutelage era is and should be part of the past now. That is why an army-connected declaration stating phrases like "honored Turkish nation, we are concerned about..." cannot be seen such as a declaration. It never was in the past.

The admirals are free to express themselves on TV or write opinions anywhere in media. In fact, their views are very much appreciated in current politics. The Blue Homeland doctrine, for example, is strongly advocated by the government and some of the admirals who signed the declaration appear on pro-government TV channels. So there is no obstacle to express themselves.