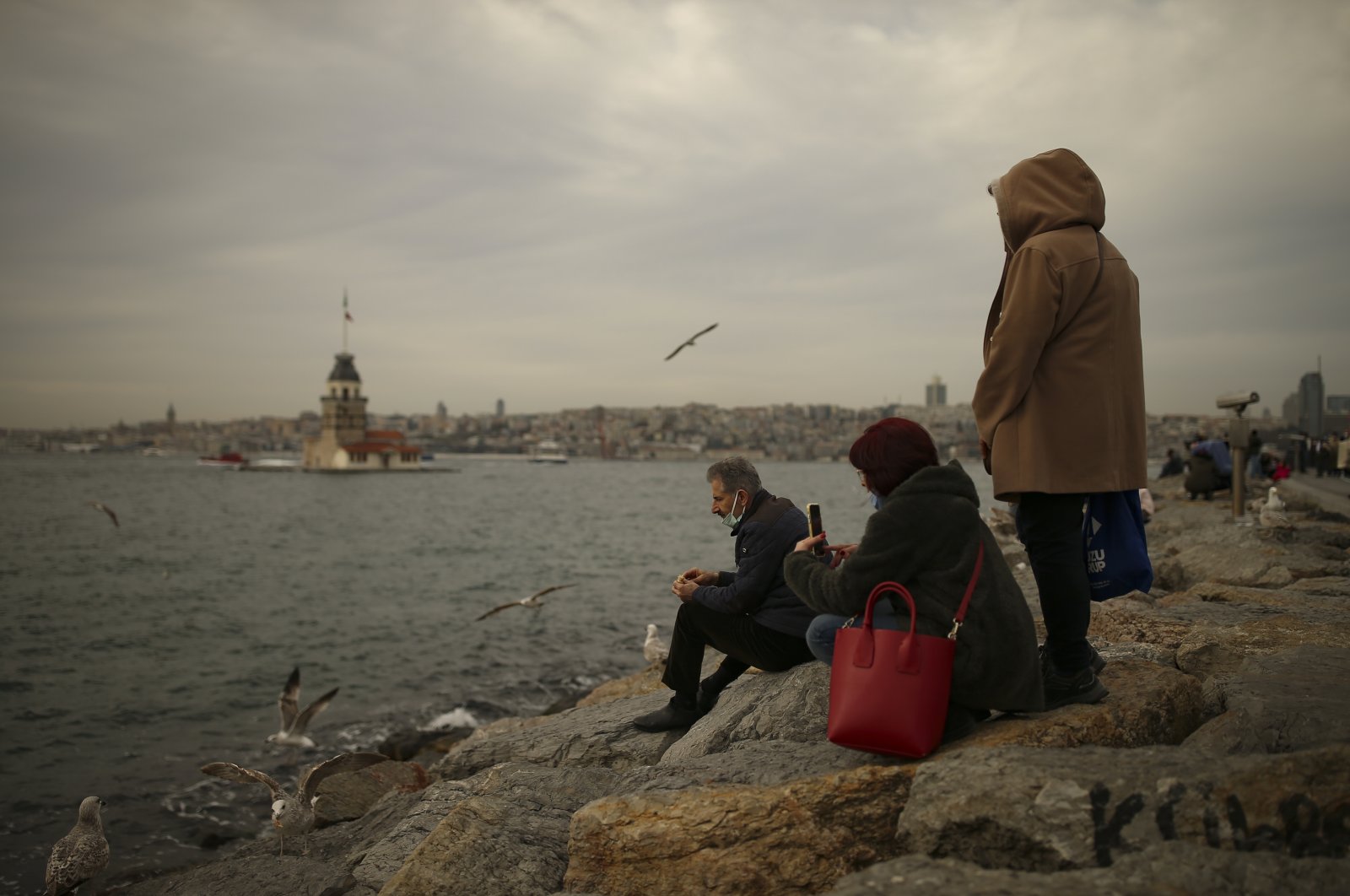 Overlooking Istanbul's Maiden's Tower, people sit by the shore of the Bosporus which separates the metropolis between European and Asian sides, Turkey, Feb. 11, 2021. (AP Photo)
by Burhanettin Duran Apr 21, 2021 12:05 am
RECOMMENDED

Turkey’s opposition parties really enjoyed taking turns in setting the date for an imaginary early election. When those claims didn’t stick, they decided to focus on new subjects like “the third alliance” and “presidential candidates.”

Selahattin Demirtaş, the former chairperson of the pro-PKK Peoples’ Democratic Party (HDP), recently attempted to mainstream the movement and highlight its bargaining power by urging opposition parties to “form a pro-democracy alliance with the HDP” unless they wanted the HDP to go its own way.

Meral Akşener, who leads the Good Party (IP), in turn, is taking preliminary steps to put her name on the opposition’s joint presidential ticket or to form a third electoral alliance – without saying that just yet. Her current performance enables her to keep both options on the table.

When asked about his potential candidacy, Republican People’s Party (CHP) chairperson Kemal Kılıçdaroğlu walked back his earlier opposition to party chairs pursuing the presidency and said that he would run if the pro-opposition Nation Alliance were to reach a consensus. It seems that he finally realized that no one (except himself and some members of his party) really shared his original view.

For the record, I have no reason to believe that Kılıçdaroğlu will run for president. He has been around long enough to know that he doesn’t stand a chance against the incumbent, Recep Tayyip Erdoğan, in the first round or the run-off.

At the same time, the main opposition leader is still committed to finding a single candidate for the entire opposition. The outcome of the 2019 municipal elections surely encourages him to think that way.

Kılıçdaroğlu brought up the possibility of contesting the presidential election to strengthen his hand in intra-opposition talks for a joint candidate.

In other words, he revised his position in an attempt to curb the growing popularity of Akşener among opposition voters. Since Muharrem Ince, his top opponent, resigned from the CHP, Kılıçdaroğlu no longer experiences serious problems there.

The IP chairperson, in turn, seems fine. Her response to the main opposition leader’s statement was to say that “there is no problem with him thinking about running.” She believes that she’s made a difference by spending time with small business owners and responding correctly to political controversies.

Akşener also counts on fringe parties sticking with her movement, and expects the CHP to win over the HDP in the first round – or the second. From that perspective, Akşener is making progress toward positioning herself as the opposition’s champion to challenge Erdoğan. At the very least, she hopes to have enough influence to hand-pick the candidate.

In truth, all those calculations must remain on hold until it becomes clear whether the electoral system will change and if an intra-alliance threshold will be put in place.

The opposition remains highly fragmented, whereas Erdoğan will clearly contest the next election as the People’s Alliance candidate.

The long election campaign, which will take two years, stands to kick off in the summer, as Turkey reins in the pandemic.

The ruling alliance isn’t bothered at all by the intra-opposition disputes over the number of candidates and the possibility of a third alliance.

The People’s Alliance, in my opinion, will seize opportunities that the opposition’s potential decision to table the discussion, until the election is around the corner, will entail.

As such, we must be prepared to listen to opposition leaders fight over the candidacy over and over again – which started before the electoral system’s update.

Another item on Turkey’s agenda has been the recording artist Erkan Oğur, who faced extraordinary pressure from pro-opposition figures for working with Ibrahim Kalın, the presidential spokesperson, on a musical project.

In the end, Oğur bowed to the secularist left’s harassment and engaged in ideological self-criticism: “(The project) hurt a part of me. I may have been wrong. I had turned down an award from the Palace in the past.”

His "community" will presumably accept that musician’s apologies this time. But anyone in their right mind was unsettled by the widespread "alienation" and hateful words lurking in the background.

Anyone who thinks of working on a musical project as “complicity in propaganda” cannot reasonably lay claim to universality or inclusion.

Their grudge and hateful approach, which drowns humanitarian values, essentially explains why the Justice and Development Party (AK Party) is still in power. Such deep otherization is rooted in fanaticism, rather than self-confidence or ambition.

The systematic campaign against Oğur, which brought him to his knees, proved yet again that Turkey’s Muslim conservatives are far more inclusive, confident and tolerant than the rest.

They are far more open to working with other social groups and finding a middle ground.

The opposition elites, by contrast, cannot rid themselves of "othering" – secularist fanaticism. They are certainly miles away from having the kind of self-confidence needed to govern a country like Turkey.