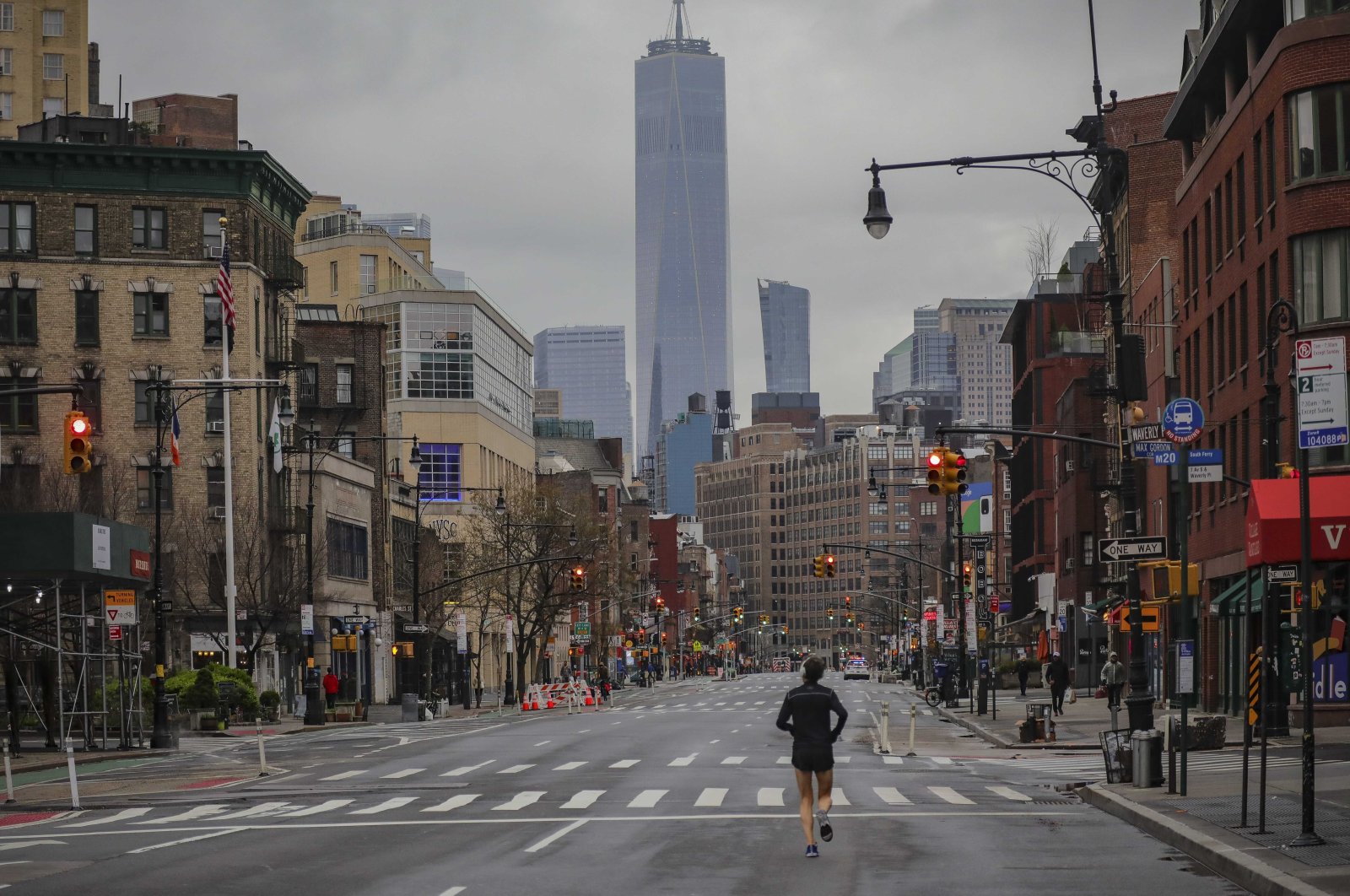 A lone jogger run on a partially empty 7th Avenue, resulting from citywide restrictions calling for people to stay indoors and maintain social distancing in an effort to curb the spread of COVID-19, in New York, Saturday, March 28, 2020. (AP Photo)
by Jurgens Klaus Mar 30, 2020 12:05 am
RECOMMENDED

Whether from the Caribbean to Europe or from Africa to the U.S., most governments all across the globe are doing their best to fly out citizens stranded in a foreign location amid the coronavirus pandemic. Authorities have often declared unilateral closure of all local and international airports on very short notice, leaving under normal circumstances well-briefed diplomatic circles to their own devices; hence, there is chaos on the ground in more than one place.

Yet this frantic scheduling of emergency departures raises several important questions. First, is it the task of a government to arrange for repatriation of their own citizens and under which circumstances? Second, who would foot the bill for such undertakings – administrations aka the taxpayers or individual travelers? And the third issue is the wider picture: Who should be allowed to avail themselves of those last-minute flights – everyone stuck in a foreign territory at no fault of their own or only tourists abroad, that is, foreign nationals without residence rights in a certain foreign state?

Offices are no travel agencies

On the first issue there have been reported cases where nationals of Country A currently holidaying in Country B heard about the option to board a repatriation flight yet only agreed to do so after they would have embarked on a final trip to the rain forest or spent a few more days in their resorts, should they stay open. Angry government officials in more than one instance went on social media to criticize these careless voyagers (of course, not by name) as their attitude toward personal safety could infringe on the personal safety of fellow citizens, who want to leave as soon as possible.

Which brings us to the core subject matter: in which type of crises are repatriation flights necessary? There are no easy answers, and above all else, they would vary from country to country. By rule of thumb: whenever a war breaks out in a foreign territory or a major natural disaster occurs chances are that foreign offices reflect at once about the possibility to step in should commercial alternatives no longer be an option. It further depends of course on the numbers of people on location – arranging for a 400-seat plane to pick up a single person would not work out that easily yet cooperating with one or two more countries’ governments to put that person on a flight of another state in all likelihood would.

At present we are hearing of tourists who ran out of money having paid huge sums to guarantee a seat on the last commercial flight out (this affects mostly destinations far away from their original home) only to be told at the airport that the flight had been canceled or the airport is shut down. To make matters worse, some countries have now closed all hotels except for emergency staff and health care personnel of their very own country – the risk of being evicted and put onto the street is in some scenarios a very real one.

Having written that, yes indeed, our foreign offices are no high street travel agencies but take great care of whoever they can fly home during this unexpected virus crisis.

A repatriation flight including obtaining landing rights is a delicate balancing act. While local citizens are no longer able to use their nation’s airports, foreign tourists are allowed to board a plane – a tricky situation which requires masterly diplomatic skills. As internet services might be curtailed or cut off very often it is word-of-mouth or in a best-case scenario, an SMS sent via the emergency hotline to all travelers in a particular location to tell them how to proceed. An SMS often finds its way to the intended recipient more reliably even when abroad whereas uninterrupted internet access could prove cumbersome to arrange for. Of course, only if those stranded travelers bothered to register their details with their home governments before departure or upon arrival! Needless to say, if someone is on a five country-tour registering five times in a fortnight is extremely unlikely. Family and friends back home are then the only lifeline to hear about whether or not there are flights out.

And what about the cost? On the one hand, it is customary not to charge passengers upfront, but many governments would later on charge at least a partial bill. The point here is most taxpayers could rightfully argue why do those who stay at home pay for the repatriation of others who went on a holiday? The buzzword here is "solidarity" as in our globalized world and cheap airfares almost everyone can go on a trip at some point. So next time, it might be you stranded 6,000 miles from home!

On the other hand, there are commercial flights still departing from quite a few airports as private companies are in touch with governments to arrange for repatriating, for example, their international staff and so on and so forth. Sometimes these nongovernment sponsored flights have seats left and offer them to paying customers.

It is up to the individual traveler to check whether that flight really exists and if so, to pay by credit card in advance.

In general, it is a laudable idea, however, to have non-company passengers filling up empty seats in an emergency on a company-chartered aircraft.

Finally – who should stay put?

This is a rather complicated subject to write about. The novel coronavirus is shocking – yet seen from an analytical perspective – very good case in point: Should only tourists without residency rights leave their temporary host countries as soon as possible or should all foreign nationals follow suit?

The answer is as complicated as the question itself. Whereas the number of tourists in any given country can easily reach hundreds of thousands (think summer beach destinations with millions of annual holidaymakers or a city like New York) the actual number of full-time expatriates, that is those foreign nationals with residency rights in that same place, is, of course, much smaller.

It seems to be a good idea to check whether, and if, you are covered by the health insurance system of your host country during a virus emergency and whether your residency papers cover the foreseeable future during and after the crisis, and whether family back in your first home can cope without you.

If all these matters are ticked off and you decide to stay put, your government will not abandon you but will tell you that from now on you are in the hands of your host nation’s administration. This means you have the same rights but the same obligations as the nationals of that country. Think quarantine – foreign residents are not allowed to leave the defined town or city or even neighborhood, same as the locals. Consider curfews – foreign residents are not able to ask for exceptions from the rule only because they are foreign.

However, should you change your mind and airports allow flights and you wish to depart, a foreign national will in most scenarios be allowed to travel to the nearest airport and depart yet in the clear knowledge that a return at least, for the time being, is highly unlikely.

All said and done – if the health system infrastructure in your host nation is as good (or perhaps even better) when compared with your former home country and as long as it is reasonable to expect that a particular crisis ends at some stage soon it might be advisable for expatriates with residence rights to stay put.