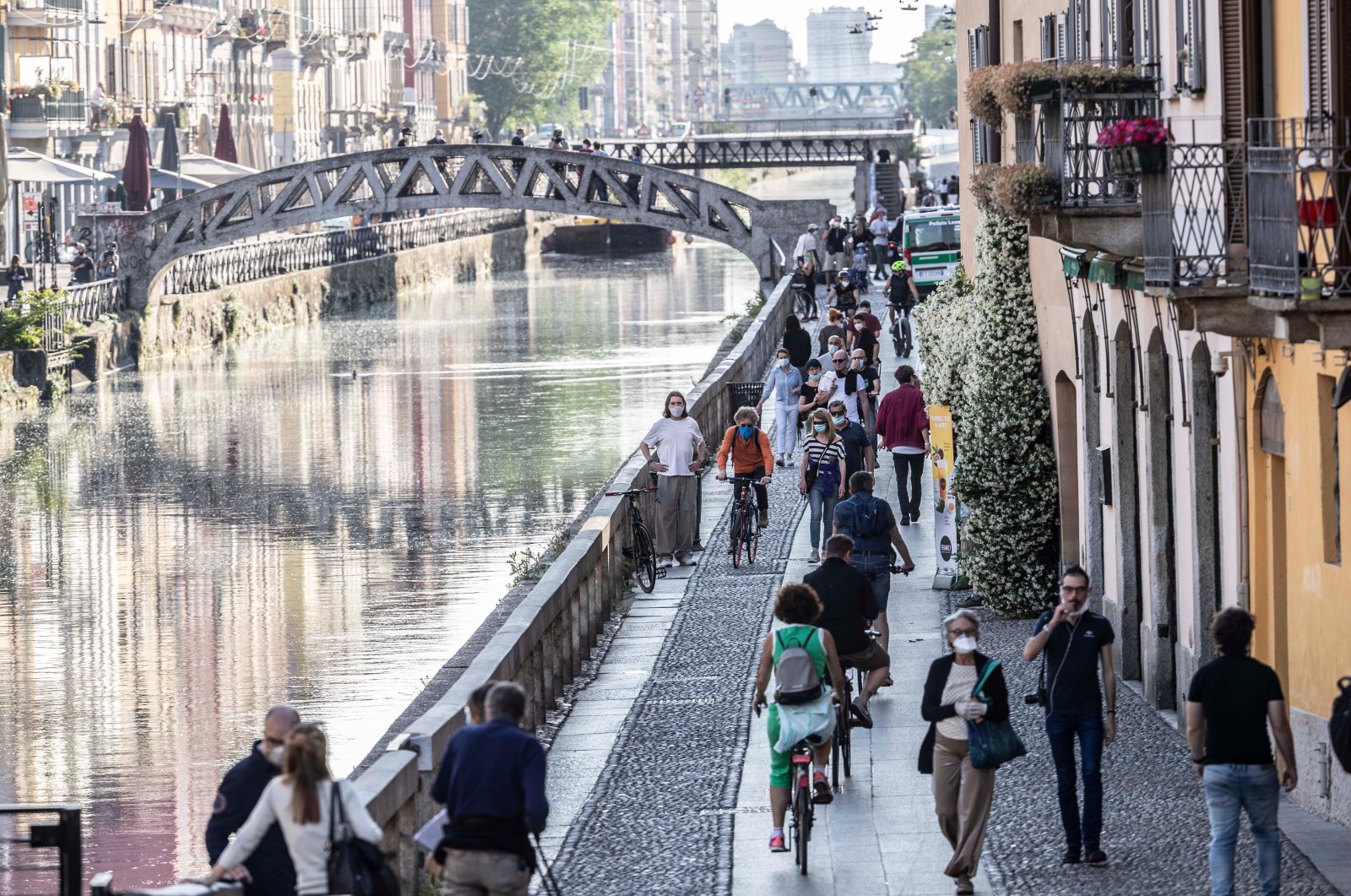 People walk along the popular Navigli area during the coronavirus outbreak, Milan, Italy, May 8, 2020. (AP Photo)
by Enes Efendioğlu Jul 21, 2020 9:01 am
RECOMMENDED

As we all become accustomed to the "new normal" months after the very first confirmed coronavirus case in Wuhan, China, we are observing new issues in global politics. Initially debates centered around who was to be held responsible for the lack of preparation for the current global pandemic and preparation in terms of whether they were medically, socially and economically prepared for this crisis. Now, however, the focus has shifted to individual countries and the surprising response or lack of response to the pandemic.

Historically, there used to be an effective balance between countries for their import and export of basic necessities. This included food, beverages, clothing and cars as well as vital medical equipment. Not every country in the world has the manufacturing capability to produce face masks, medical gloves or respiratory machines. Many nations have had to import vital medical equipment, but this has been disproportionate, and some countries have benefited more than others. There are states desperate for crucial medical supplies that will by any means possible try to obtain life-saving equipment for their citizens and medical workers.

This desperation and scarcity of life-saving equipment during this pandemic have led some countries to go down some very unethical routes. In recent months, there have been reports that nations have either blocked, stolen or taken supplies destined to be transported to other countries. The involvement of the military and the U.S.' Secret Service demonstrate that face masks and other essential products have become issues of national security following the worsening outbreak of the coronavirus.

In March, the German Defense Ministry confirmed that 6 million FFP2-type masks purchased by their country went missing at Kenya’s airport as cargo was transiting there. Israel’s Channel 13 announced that Mossad, the national intelligence agency of Israel, had acquired medical equipment from different countries; however, those countries remained anonymous and the type of equipment was also not mentioned. This type of intelligence war for medical equipment is unprecedented.

Another example is the recent crisis between the Czech Republic and Italy, both of whom are members of the European Union who have signed and agreed to adhere to the fundamental values of the EU that include human dignity and the rule of law. It was reported that Czech authorities seized essential products that were being transported from China to Italy. They tried to justify this by claiming it was due to restrictions on taking medical supplies out of the country. Italian authorities acted very swiftly and sharply, resulting in the Czech Republic immediately sending the same number of face masks to Italy. Although this problem seems to be resolved, there still remains a very big question mark over the shared values of member countries of the EU, as well as the level of trust among them.

At around the same time, at the height of the crisis, Tunisia’s Trade Minister Mohamed Msilini publicly accused Italy of seizing a shipment of medical supplies bound for his country from China. "Today, all European countries are hysterical, and all of them are stealing equipment for fear of the virus," he claimed.

The majority of EU leaders speak publicly about Europe being the center of human rights and about the rule of law, equality and transparency. The actions of Germany, the Czech Republic and Italy during this pandemic, however, have demonstrated that the EU and its rules can simply dissolve in times of severe crisis. They have proven that they are unable to cooperate or support each other, and as we have observed, are willing to readily employ difficult tactics to selfishly gain an advantage. These situations will be at the top of the agenda for bloc leaders to discuss as they try to navigate their way through this era or they will see EU countries falling further apart once the crisis ends.

European nations were not the only countries desperate for supplies at the peak of the crisis. Unfortunately, there were also a high number of African and Eastern states that needed supplies but had neither the financial resources nor the bargaining power to seize supplies from other countries. During the pandemic, few nations were there to help those in desperate need. Turkey has been one of the strongest players during the crisis, leading the way in global "coronavirus diplomacy" by sending medical aid to more than 138 countries, including Spain, Italy, the U.S., Britain, France, Iran, many African countries and the Balkans.

It may be surprising for some people to learn that Turkey sent a Turkish Air Force Airbus 400 military plane full of masks, hygiene kits, disposable gowns, disinfectant and goggles to the U.S. To put this into context, according to the World Trade Organization (WTO), Turkey is the fourth leading country in textile production and its export in the world. During the outbreak, many textile factories in Turkey stopped their regular types of work and started to produce only medical supply materials for export to the rest of the world.

Although it is very surprising that Turkey was able to support the "biggest players" in the world, one should also consider the humanitarian and helpful approach Ankara has when it comes to crisis situations. Currently, according to the United Nations High Commissioner for Refugees (UNHCR) and the United Nations Office for the Coordination of Humanitarian Affairs' (OCHA) official figures, Turkey hosts the largest number of refugees in the world and is also the leading country in terms of its level of humanitarian aid.

Turkey has a message written on every box of medical supplies it ships, including those unloaded at the Belgrade Nikola Tesla Airport that Serbian TV channels noted highlights Ankara’s perspective on the coronavirus crisis. Printed on the packages in both English and Turkish is the famous quote of 13th-century Sufi philosopher Mevlana Jalaladdin Rumi: "After hopelessness, there is so much hope and after darkness, there is the much brighter sun."

We hear reports every day about what the world will look like after the pandemic, and there is definitely no definitive answer at the moment. What is clear, however, is the unethical approach being adopted by various countries toward each other, when they should be supporting and uniting together in this time of crisis. Turkey has singlehandedly managed to assist over half of the world’s states, while still keeping the pandemic under control within its own borders. There may or may not be new global opportunities for Turkey after the crisis, but what we are guaranteed to see is European countries growing further apart.

Let’s keep in mind what Bosnian leader Aliya Izetbegovic said during the darkest times of the genocide, "In the end, we will not remember the words of our enemies, but the silence of our friends."