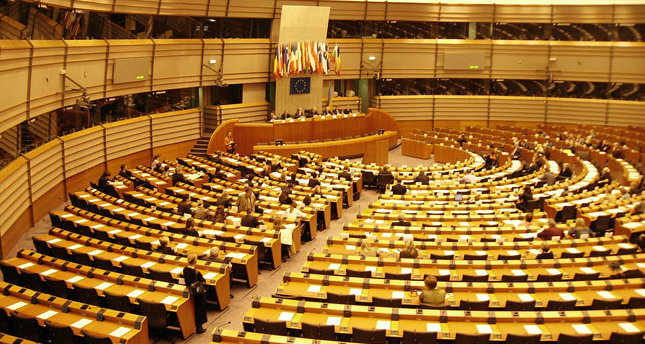 by Ali Ünal Mar 14, 2014 12:00 am
ANKARA – The European Parliament's (EP) resolution regarding the European Commission's 2013 progress report on Turkey was adopted Wednesday in Strasbourg.

However, the adopted resolution led to disappointment in Ankara, with the Ministry of Foreign Affairs and Ministry of EU Affairs releasing separate statements expressing their discontent about the resolution.

In a written statement, the Ministry of EU Affairs claimed that the EP's approach to Turkey was prejudiced regarding amendments to the laws on the Supreme Board of Judges and Prosecutors (HSYK) and the Internet.

The ministry said that although the two laws are in line with legislation in many EU member states, they have been criticized by the EP without observing their implementation.

The Ministry of EU Affairs also asserted that the resolution does not address the recent Fifth Judicial Reform Package which abolished the regional serious crimes courts - also known as the Specially Authorized Courts (ÖYM) - and introduced important amendments to criminal legislation expanding fundamental rights and freedoms.

The resolution also seemingly fails to sufficiently refer to the law adopted for the implementation of the Democratization Package announced by the prime minister, which enhances standards of democracy by expanding the scope of state aid to political parties, allowing political campaigning in different languages and dialects, introducing harsher penalties for hate crimes, allowing education in different languages and dialects in private schools, and guaranteeing respect for individual lifestyle choices.

The Ministry of Foreign Affairs (MFA) voiced its regret that the EP continues its biased approach on the Cyprus issue. Despite Turkey's efforts to reach a solution in the Cyprus peace process, the EP has ignored all constructive steps taken by Turkish Cypriot negotiators.

The MFA also expressed its disappointment that developments during and after the Gezi Park protests, as well as efforts to ensure the separation of powers and the independence of the judiciary have not been fully understood by EU institutions and authorities.

Nevertheless, both ministries expressed in a statement that the Turkish government will remain committed to the reform agenda and the EU process.

While the MFA said, "No one should doubt that the principles of democracy, human rights and the rule of law are taken into account as fundamental elements in making any new legislation," the Ministry of EU Affairs said, "The Turkish Government will remain committed to the reform agenda and the EU process." The statement continued: "The EU Ministry also notes the necessity of the EU's support on the politically blocked chapters for the smooth progress of the negotiation process. So long as these chapters remain blocked, our people will continue to doubt the sincerity and impartiality of the related criticism."

The EP's resolution, which was accepted on Wednesday, points out that the HSYK and Internet laws are seen as restricting fundamental freedoms and do not assist Turkey in meeting the Copenhagen criteria for EU accession.