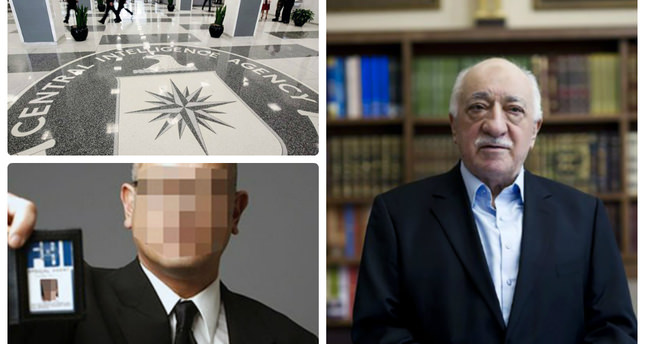 ISTANBUL — The Gülen Movement's structure and connections continue to be questioned and scrutinized by a number of individuals as it attempts to portray an image of a faith-based organization more findings, however, contradict that claim as intelligence officers and religious figures alike question the true agenda of the movement. The Gülen Movement is being accused of perpetrating a series of antigovernment leaks and of exploiting its influence within the police and the judiciary.

Ferhat Ünlü, the intelligence editor for Daily Sabah's sister paper Turkish language Sabah newspaper's, said the Federal Bureau of Investigation of the United States (FBI) is not so fond of the Gülen Movement or its Pennsylvania-based controversial leader Fethullah Gülen and that there is a deep clash of opinions between the FBI and the Central Intelligence Agency (CIA).

"This is a reality and the FBI explicitly does not adopt the views held by the CIA toward the Gülen Movement as was evident in the Green Card incident," said Ünlü, who explained that the FBI resisted granting permanent residency status to Fethullah Gülen during the period between 2006 to 2010. Gülen was at the time staying in the United States on a tourist visa since 1999 when he came to the country to receive medical treatment. Ünlü noted former CIA officials supported Gülen receiving a Green Card, whereas the FBI denied the requests.

This incident was recorded in the Wikileaks cables dated Aug. 4, 2005, when Gülen approached a number of prominent officials for a reference letter to be sent to the immigration office, including Istanbul's Chief Rabbi Ishak Haleva as well as the ecumenical and Armenian patriarchs. In the cables, the rabbi debated whether or not to write a letter for Gülen in response to the request to "address the belief in parts of the U.S. government that he is a 'radical Islamist' whose moderate message cloaks a more sinister and radical agenda." According to the cable, this was crucial to address the concerns stemming from FBI documents received by Gülen's supporters through a Freedom of Information Act (FOIA) request.

Moreover, the cable said the FBI's attaché to the consulate in Istanbul, referred to as the Istanbul legat, "was also approached by police contacts with Gülenist links who asked that the bureau provide a 'clean bill of health' for Gulen."

Ünlü argues Gülen attributed the FBI's refusal to grant him reference to Emin Aslan, a police chief who previously visited the United States to see his son and took a photo with FBI officials as a souvenir.

The photo was sent to Gülen through police officers who blamed Aslan for provoking FBI officials to refuse Gülen's request. Following the incident, Aslan was persecuted by the Gülen Movement's agents within the institution, according to intelligence received from former police officers. Elaborating on the issue, Ünlü stated that the CIA allegedly took a coordinative approach with the Gülen Movement and is more likely to defend the movement, whereas the opposite is true for the FBI.

The movement's true and ultimate intentions are questioned by many, as was also evident in the Wikileaks cable. Many refer to the pressure put on people drawn in to the Gülen Movement to financially support Gülenist activities. "We have multiple reliable reports that the Gülenists use their school network (including dozens of schools in the U.S.) to cherry-pick students they think are susceptible to being molded as proselytizers and we have steadily heard reports about how the schools indoctrinate boarding students," read the cable. Multiple other Wikileaks notes refer to such suspicions.

For instance, a cable dated Aug. 28, 2009, was an email conversation between Reva Bhalla from Stratfor and U.S. government official Jon Tracy that describled the movement as a "cultish organization."

Recently, the Gülen Movement was put under scrutiny when Leyla Çelik, in charge of after-school activates at Safiye Sultan College, a school affiliated with the Gülen Movement, filed an official complaint to Bakırköy's prosecutor's office for "insulting, mobbing and the violation of employee's personal rights" after she encountered incidents where school administrators forced students to curse the prime minister, mistreated those who supported the government and blamed them for establishing a "cast system" where they treated those who did not agree with their ideologies as slaves and forced and threatened them to vote for the Republican People's Party (CHP) in the local elections.

On the other hand, Günther Meinel, the president of Diplomats International (DMW), noted that Gülen is not just a religious figure but also had a different agenda and was preparing for a new plan to create chaos in Turkey after his organization failed to bring the government down through a defamation campaign specifically designed prior to the local elections via the release of a number of fabricated tapes, wiretapping incidents and the Dec. 17 operations. Criticizing the Gülen Movement's attacks, Günther noted the German government put the movement's schools under strict scrutiny.