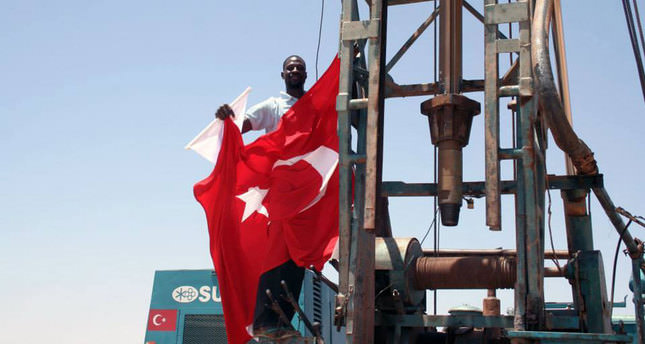 Operating in more than 100 countries with 37 offices TİKA delivers Turkey's generosity around the world. Turkey advanced its aid activities from basic-needs projects to the preservation of cultural assets and developmental assistance

ISTANBUL — Reaching its helping hand around the world, Turkey has increased its Official Development Assistance (ODA) by 30 percent in the last decade. Beginning with emergency aid, Turkey also advanced its aid activities from basic-needs projects to the preservation of cultural assets and developmental assistance. As an important force in the country, the Turkish Cooperation and Coordination Agency (TİKA) conducts leading projects around the world.

- TİKA has been operating since 1992 but came out in force in the last decade, and currently conducts crucial projects in more than 100 countries. Can we say that TİKA is also developing with the new Turkey?

First of all, in order to provide developmental help to foreign countries you need to have the adequate economic power. There is an absolute increase of capacity and gained powers in the last decade due to the political and economic stability.

Sharing its experience and accumulation lies beneath the work of TİKA. We provide a common platform by coordinating and using sources of NGOs, universities, governmental organizations, ministries, companies and local authorities. We also collaborate with the countries we sign protocols with.

We need to understand TİKA as part of a thousand-year-old civilization. In this term, there is a deeper meaning attached to TİKA's projects, that it is not only about implementing.

The most important part is to build bridges between people.

- TİKA works in coordination with nongovernmental and governmental organizations and ministries. Can you define the nature of TİKA's working system?

TİKA has provided a platform for other sister countries to share Turkey's opportunities.

Countries such as Azerbaijan, Kazakhstan and Turkmenistan that no longer have the need are now our partners. For example, recently Azerbaijani and Turkish medical teams conducted joint health projects in Tanzania. Started in a confined region, TİKA currently reaches 110 countries with 37 offices. Of course this helps to develop bilateral relations, for people to know one another and to produce mutual projects in various areas.

Can we also consider this a method to fight terrorism or hostility between the countries?

This can be considered as one of the methods to fight against terrorism or hostility. In the countries where it works, TİKA also serves by creating mutual friendship and to prevent ways to create enemies. Whenever we talk about a 'Turkey model' regarding aid activities, certain qualities occur and the basis of these is sincerity.

Especially after World War II, some developed countries exploited regions under the guise of humanitarian aid.

So does that mean Western countries have a hidden agenda behind their aid work?

I think it would be wrong to use such a political argument. Despite all, some of the United Nations countries and some organizations under the U.N. and OECD organizations, conducted certain aid projects following World War II; thus some further destruction was prevented or reduced. The problems should be detected without making generalizations.

TİKA aims to implement model projects with a sustainable economy without any hidden agenda, via bilateral agreements based on transparency.

What can you tell us about the resources and transparency of TİKA and how can you convince us that there are no hidden agendas?

Tangible projects and measurable outcomes and impacts of on-the-ground activities are important for the credibility of the organization or the donor country. TİKA conducts its projects successfully in terms of maximum productivity and specifically effective usage of resources.

TİKA places special effort on using its resources for the projects itself, without reducing them through administrative or transportation expenses and such. To create and maintain this model is of course a success. In international standards the percentage used for the expenses that includes the personnel salaries and other overhead costs start at 5 percent go up to even 50 percent, whereas in Turkey, the expenses cut from the aid budget are less than 1 percent.

TİKA proceeds with a strict transparency policy. We are inspected in accordance with law no. 5018 pertaining to financial obligations.

The Supreme Board of Public Accounts inspects all our work and projects, not only TİKA's but also other Turkish institutions. Besides, with an internal auditing mechanism TİKA is also inspected by the Parliament. We even invite inspectors from the board to examine our projects on the ground. Transparency, auditability, and maintainability are the most important aspects of aid work and TİKA conscientiously and successfully meets these qualities.

Our cultural heritage, the waqf (charity foundation) experience and the government's stance regarding bureaucratic auditability motivate us in shaping the nature of our system.

So in order to prevent any shady operation by organizations, do you think standardization of rules on an international level is necessary?

Serious work is required in order to develop ethical norms regarding aid work. In fact, Turkey was brought to the fore as a model during international meetings such as OECD meetings.

Last weekend I was in Kenya. There is the Garissa region in the northeastern part of the country populated by people of Somali ethnicity.
As Turkey, we have implemented two important projects there: one is a Mother-Child Health Center, including incubators, operation room and equipment. The other project is in Masalai city where we established a center that provides housing and healthcare services to pregnant women, especially for women who live in distant areas and face the risk of death due to a lack of health facilities. The projects are also targeted to reduce the infant mortality rate.

These projects will help to increase the population, which will be followed by other projects aiming to educate people with vocational training courses, agricultural projects and many others to increase productivity and help people to process their raw natural resources from zero to factory productions.

In Kenya and in the rest of the continent, TİKA's Somalia projects are very popular and stand as solid proof of Turkey and TİKA's sincerity behind the aid work.

On Aug. 14, 2011, Turkey's prime minister arrived in Somalia, a deserted country considered dangerous for terrorist activities, with three planes loaded with people. These aid activities cannot be explained without the word sincerity. Besides many other projects trying to meet the urgent needs of the country, Turkey built a 200-bed capacity hospital in Somalia, including 28 kilometers of road, a university building and a school of nursing. Turkey's aid work in the country, which is based on the values of morality and humanity, has become a reference point for many articles and books on the subject. In other words, Turkey is contributing to the construction of the new Somalia.

In the summer of 2011, a huge aid campaign was organized by the Turkish Red Crescent, TİKA and Turkuvaz Media Group (Daily Sabah's parent company) and I want to thank you especially for this. This campaign triggered other campaigns in Turkey and $300,000 of monetary aid was raised in only one month.

What are your resources and how do you fund your projects?

The State of Turkey funds all our projects after their efficiency and planning is studied under a certain format. TİKA uses the state's budget as well as the Department of Finance and the Prime Ministry Disaster and Emergency Management Presidency's (AFAD) budget.

And occasionally it receives challenge grants via special campaigns as with the Somalia campaign. For individual donations, we sign a protocol with the grant maker, which might be a businessman, municipality or a company to implement a certain project, for example a mosque restoration. We implement projects through our coordination offices. We had only nine offices in 2002, but currently the number of TİKA offices has reached 37. We received requests from all around to open more offices, but we believe in a model based on sustainability.

In order to use our sources and operational capacity effectively, we avoid increasing the number of our offices. Our aim is to keep the offices running as much as possible rather than increasing their numbers. We are working on a model of central coordination that lowers the costs and enables implementing projects without expanding the number of offices.

One of the challenges of the organizations that provide developmental aid is human resources, to find the right people to work with.

A person can be very clever, highly educated and experienced but still might not fit the profile to conduct on-the-ground projects. We need special types of people, who are multi-dimensional, know the technical and monetary sides of the system and the diplomacy; who can work on a construction site as well as in an office. Not only NGOs but also governmental organizations need this type of officer, which is an important inadequacy that needs investment in terms of education.

Preserving cultural heritage with tangible and intangible assets is also a part of TİKA's work. Could you give us some details?

Preservation of cultural assets is a sub-category under development that requires economic contribution, expertise and experienced staff.

We are a nation that inherited a historical and cultural heritage scattered around the world. For instance we have Orkhon inscriptions in Mongolia, many other cultural assets in cities such as Bukhara, Samarkand, Merv, Belh (in Khorasan) where Rumi's father Muhammed Bahâeddin Veled's tomb is located. TİKA conducts projects to detect and protect the tangible cultural assets, as well as the collection and classification of data, archeological excavations, and the establishment of museums. TİKA also restores bridges, mosques, madrasahs and executes projects to protect and sustain intangible cultural assets such as values of Ahi guild. Our projects of culture heritage embrace not only Turkish, Turkic or Islamic heritage, but we also plan projects to preserve the assets of other cultures and religions.

One of our highlighted projects is the restoration of King Negash's tomb, located in Mek'ele city of northern Ethiopia.

He was the Christian king of Ethiopia (also known as Ashama ibn Abjar in Arabic) who generously granted refuge to Prophet Mohammed (pbuh). So he is in an important figure in the history of Islam and Christianity. This story also has an important aspect in terms of humanitarian aid. So under the duty of fidelity, Turkey conducts projects of restoration of the tomb and construction of cultural and touristic complex buildings in the country. We try to detect all the cultural assets and protect them through restoration. We detected the monuments of Ottomans in Sawakin Island, Sudan and 14 pieces of Ottoman monuments in Port Zeila in the Gulf of Aden, and the foundation of the house that once belonged to the father of Mustafa Kemal Atatürk in Kodzadzik, Macedonia. These are just some examples of our works.

Besides these, TİKA also conducts projects to build a bridge of love between the people in the distant geographies and the people of Turkey.

A year and a half ago, Lincoln McCurdy, the president of the Turkish Coalition of America, offered for us to conduct a project for the Native Americans in Oregon, U.S. The idea was also supported by Namık Tan, ambassador of Turkey to the U.S., in order to develop relations.

After the project was approved by our prime minister, we agreed to build a water tank, with a 500,000 gallon capacity. A ceremony was held with the attendance of our ambassador, Namık Tan, 517 tribal chiefs and 10 members of Congress, where we presented our project as a gift from Turkey to the Native Americans of Oregon. The project created a tremendous impact.
Last Update: Apr 07, 2014 1:33 pm