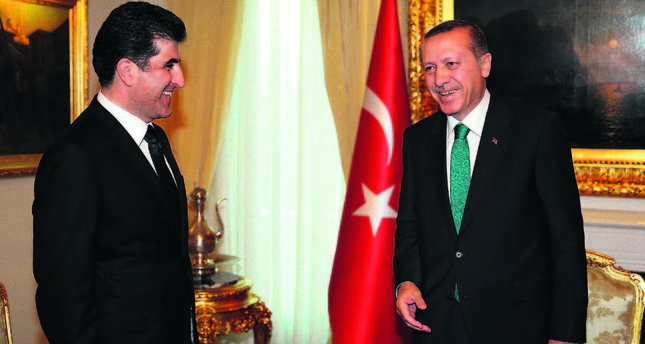 Failing to mend ties with Baghdad, the Kurdish Regional Government is aiming for an independent state. Prime Minister Nechirvan Barzani was in Ankara to see what Turkey's reaction would be

ANKARA — Iraqi Kurdish leaders feel that if the current impasse in relations with the Iraqi central government continues after the April 30 elections they will have no other option but to gradually weaken their ties with Baghdad and eventually declare a separate state. Kurdish Regional Government (KRG) Prime Minister Nechirvan Barzani was in Ankara to meet with Prime Minister Recep Tayyip Erdoğan Wednesday night to feel the pulse of Ankara if the Kurds eventually move away from Baghdad. A source close to Barzani told Daily Sabah on Thursday that Barzani returned home late Wednesday night "satisfied."

The central government of Iraq led by Nouri el-Maliki has been at odds with the Kurds over an array of issues stemming from an oil and gas dispute. Baghdad has thus been slow in sending the KRG's share of Iraqi oil revenues and therefore pushed the Kurds into a financial bottleneck with serious delays in even the payment of civil servant salaries in the KRG.

Barzani discussed at length with Erdoğan the current political situation in Iraq and explained that Maliki is following a policy of confrontation with the Kurds as well as the Sunni Arabs in his elections campaign to solidify Shiite support and thus win a major share of the Shiite vote in the April 30 polls.

As such, on the one hand he is not facilitating an agreement with the Kurds that will allow the flow of Iraqi oil produced in the KRG region to be exported through Turkey, and on the other hand he is branding the Sunnis as terrorists and setting the stage for a major confrontation.

The Kurds say Maliki has been playing the Iraqi oil revenue card for too long and has thus created serious hardships in the KRG. According to the Iraqi constitution, the Kurds are supposed to receive 17 percent of Iraqi oil revenues each month but that figure is cut down to about 10.5 percent because the central government deducts 6.5 percent for federal expenses on defense, health and education. But even that 10.5 percent is not automatically sent to the KRG and Maliki has used delaying tactics to push the KRG into a financially tighter corner.

The Kurds have reacted by boycotting parliamentary sessions in Baghdad, resulting in the fiscal year budget not being passed. Maliki blames the Kurds for the budget impasse, using it as an excuse for not being able to send oil revenues to the KRG. The Kurds, however, say that Baghdad was stalling the oil revenues long before the boycott.

The Kurds have signaled to Ankara that they will wait until after the elections to see if the situation improves. If they see no light at the end of the tunnel they will reportedly start gradually severing ties with Baghdad and eventually form a separate independent state.

According to the analysis offered to Erdoğan by Barzani, the Kurds expect Maliki to win most of the Shiite seats in parliament but there could be some surprises that undercut Maliki's strength. But at the end of the day, even if Maliki wins as expected, he will not have a majority in parliament and will need the support of the Kurds and Sunnis to form a coalition government. Iraqi Kurds say this is easier said than done because the Kurds and the Arabs will push for gains and Maliki will clearly resist. It took nine months to form a coalition in the previous elections.

Ankara has facilitated the sale of Iraq's oil produced in the KRG but wants to see the Kurds and Baghdad reach an agreement on the terms of export. There is already $120 million worth of KRG crude oil waiting in depots in the Mediterranean oil terminal of Ceyhan. Iraqi Kurds say they are in no hurry to sell this oil and are not pushing Turkey to export it without Baghdad's consent.

However, the Kurds say they will not wait forever and time is running out for Baghdad to facilitate the sale of their oil.

According to the Kurds, the status quo will not be tolerated after the elections. It will be a make or break situation and they have hinted as much to Erdoğan.

Ankara in return supports the KRG; however when the issue is a separate Kurdish state, Turkey is more guarded. Ankara wants a unified Iraq and foresees serious complications in the event that a Kurdish state is proclaimed. Also, Ankara does not want to be seen as the big brother encouraging the Kurds to part ways with the Arabs.

The Kurds want Kirkuk but for the sake of a major Turkoman population living there, Turkey has sided with the Arabs and successfully scuttled a referendum for the future of the province. Besides many complications, Kirkuk would be a major issue between the Kurds and Arabs, ultimately pushing Ankara into troubled waters.
Last Update: Apr 18, 2014 3:35 pm
RELATED TOPICS