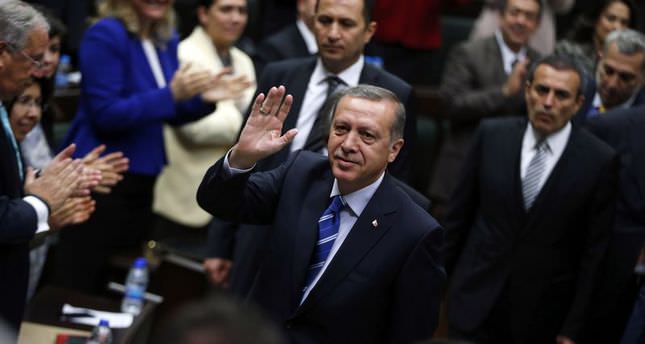 by Daily Sabah May 01, 2014 12:00 am
ISTANBUL — As Turkey enters into yet another election season following the March 30 local polls, the AK Party is preparing to make changes to the current election system ahead of presidential elections on Aug. 10 and parliamentary elections due in 2015. Turkish Prime Minister Recep Tayyip Erdoğan and the AK Party's Central Executive Board (MYK) discussed an amendment which suggests three options to change the electoral system. They include a change to elections based on a first-past-the-post election or singlemember district constituency or retaining the 10 percent threshold system.

Discussing each of the three options, MYK members said that the first-past-the-post system could create factional or party strongholds across the country, especially since many delegates from eastern Turkey would be elected from the Kurdish-based left wing Peace and Democracy Party (BDP). The member highlighted that the first-past-the-post system may also pave way from the main opposition Republican People's Party (CHP) and Nationalist Movement Party (MHP) alliance in Aegean and Mediterranean Turkey. During the meeting, Erdoğan said, "I think the first-past-the-post system will be the best but the time is limited to make the required amendment for it. It is needed to discuss the system for a couple months to clarify its pros and cons." Establishing single-member district constituencies would also see the election threshold decrease from 10 percent to 5 percent. Describing the system as practical, MYK members appear to be hesitant to push ahead with singlemember districts due to the possibility that the Turkish Constitutional Court (AYM) could reject the system. MYK members say, "The court can remove the 5 percent threshold without changing the current system." One of the biggest causes of concern for the AK Party related to election amendments is the AYM's ability to annul legislation. Previous AYM verdicts saw the election system become nonfunctional in 1960, which brought about the establishment of the current system based on proportional representation. Therefore, the AK Party may decide not to risk an AYM verdict on changing the electoral system and opt for maintaining the status quo.