The Balkans can be a region of growth through cooperation, says Foreign Minister Ahmet Davutoğlu 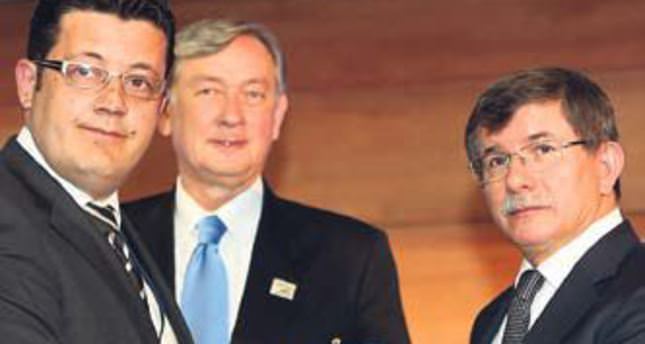 by Daily Sabah May 15, 2014 12:00 am
SAREJEVO — As part of the Sarajevo Business Forum, Turkish Foreign Minister Ahmet Davutoğlu arrived in Sarajevo yesterday and delivered a speech. A moment of silence was first observed for the miners who lost their lives in Tuesday's coal mine fire in Turkey's western district of Soma. Speaking at the forum, Davutoğlu touched on the importance of cooperation among Balkan countries, pointing to the cooperation between Turkey, Azerbaijan and Georgia as an example. The Balkans can become a stable region through cooperation, the foreign minister said.

Davutoğlu and his Danish counterpart Martin Lidegaard issued a joint press statement Tuesday on the occasion of Lidegaard's official visit to Turkey between May 12 and 15.The two foreign ministers exchanged views on regional and international issues, pointing out that Turkish-Danish relations have been revived in recent years. Davutoğlu also thanked his counterpart for Denmark's support in Turkey's EU accession bid.

On the Ukraine crisis, Davutoğlu stated that both countries held similar views on the ongoing turmoil there and added that Turkey's stance is clear regarding Ukraine's territorial integrity. If Ukraine loses its integrity, all of Europe and Eurasia will feel its effects, he said.
Touching on the controversial Freedom House report that demoted Turkey's press freedom from "partly free" to "not free," Davutoğlu stated that no democracies are perfect when it comes to issues of freedom, but reports on this issue should be realistic and objective. He said that just like Freedom House criticized Turkey, there is freedom of expression in Turkey to in turn criticize such reports. Davutoğlu noted that contrary to claims in the report that there are 44 detained journalists in the country, five journalists with press cards were imprisoned for crimes related to violence and terrorism. "When we called them [Freedom House] and asked on what grounds they asserted that 44 journalists were detained, they said the data belonged to 2013. What kind of report can hand down a decision without being updated?

Turkey and North Korea are in the same category in the report. How is that possible?" Davutoğlu stated. When a Gülenist journalist asked both Lidegaard and Davutoğlu whether it was normal for a prime minister to control media outlets and threaten certain media groups as Erdoğan does, Davutoğlu retorted by saying that the question itself is proof of press freedom in Turkey. "If a member of the press can ask a question implying an insult to the prime minister at a foreign ministry meeting so openly, this is the clearest sign of press freedom in Turkey," he claimed. Regarding the ongoing civil war in Syria, Davutoğlu stated that there is a humanitarian tragedy in Syria and its people are under threat from regime forces and extremist groups.

Lidegaard stated that Denmark supports Turkey's EU bid, adding that the 23rd and 24th EU chapters should be opened. Thanking Davutoğlu for his hospitality, Lidegaard said Turkey and Denmark's bilateral relations are at their peak and cooperation between the two countries will continue to strengthen. Lidegaard stated that Denmark and Turkey act together in all international crises and even though there are certain problems in terms of press freedom in Turkey, there are huge developments as well. Touching on Turkey's hosting of Syrian refugees, Lideegard said, "The entire international community is aware of Turkey's aid. I assume that no other country can host
this amount of refugees."
Last Update: May 15, 2014 1:52 am
RELATED TOPICS